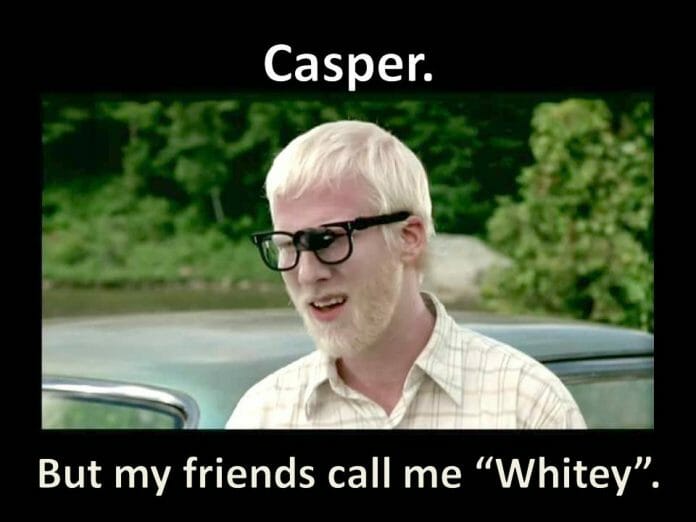 SmorgasBurgh is here to whiten up your Black Friday.  We’ve come to our own conclusion that white Pittsburgh sports fans tend to overrate white players—and tend to unfairly criticize the black ones.  You may disagree, which is understandable because most bigots don’t even realize they are one.  We coined the term Over-Whited to describe such overrated white Pittsburgh sports figures and compiled a list of the top 10 in no particular order.

The number of Kreider jerseys at a Steelers game will outnumber those of black pro-bowlers James Harrison, Casey Hampton and James Farrior combined.  (I saw one at a Pirates game once.)  Kreider was a decent fullback—but fucking terrific at being white.  Talk show callers still complain that Bruce Arians doesn’t use a fullback (ie, another white guy) in his system.

What’s 7 foot tall and can’t dunk?  He was overrated and overweight, but there were Pitt fans who think Gray was their best center ever and even believed he would be a number 1 pick in the NBA draft.  The irony here is that he probably would have—had he been black.  Also ironic is that he ended up in New Awlins—the blackest place on earth.

Broke his ankle in the whitest way ever—running to first base.  A black man could jump out the window of a two story building with a flat screen under each arm and not break his ankle.

Despite the fact that Mike Tomlin has two AFC Championships and one Superbowl win in JUST FOUR YEARS, there are still fans who think one of these white guys should have gotten the job instead of him.  These fans deserve to be stabbed in the neck.

Ask any Pirates fan who the best Pirates player is and the answer is undoubtedly Andrew McCutchen.  Then ask them who their favorite player is and the answer is undoubtedly Neil Walker.  (There are even some ridiculously racist fans who will answer Walker to both.)  I listened to Sports talk radio last summer when the topic was all-star snubs and more people said Walker than McCutchen.  Being white can make you retarded.  (note:  McCutchen was later named to the all star team.)

There is no more over-whited sport than boxing.  Even Hollywood can’t help but make a movie about every white boxer ever.  (Rumor is TriStar Pictures executives even wanted Nicolas Cage to play Ali.)  Paul Spadafora never won anything of significance but would be a good candidate for his own movie just for being white.  Then he pretty much sealed the deal when he went and shot up his pregnant girlfriend.  OSCAR WORTHY!

As much as it pains me to say this, Hoge was overrated.  He was the slowest running back ever and played on some of the shittiest Steelers teams ever.  But fans overlooked all that because he was white and our black running backs had cocaine problems.  An avid hunter and outdoorsman, he couldn’t have picked whiter hobbies.

Besides Heath Miller, name the best Steelers tight end of all time.  Most would name Bruener instead of Eric Green or Bennie Cunningham or Larry Brown.  Bruener was good (maybe even great given his excellent blocking) – but Eric Green was fantastic as both a blocker and receiver and both Cunningham and Brown were named to the Steelers “All Time” team in 2008.  (The white Elbie Nickel was also named to that team but he played in the 40’s when everybody was white.  He could very well be on this list too.  And with a name like Elbie Nickel, did I really have to tell you he was white?  WHITEST NAME EVER!)

How can a hockey player be over-whited, you ask?  Ferrence was a rookie at a time when most of the Pens were either Russian or Czech.  Too foreign for us white folk!  In comes Andrew Ferrence (as white as ever) and scores three goals in his first playoff series.  (Nevermind the fact that all of them were shots from the point that were 20 feet off target but ricocheted off defensemen and into the net).  Immediately he was elevated to Jesus status because of his whiteness.  Despite his lack of talent he is still in the league.

Bonillia, Bonds and Jose Lind all take an ass-load of criticism for not performing in the playoffs, but nobody mentions Bell’s .172 average in the ’92 post season because he is the whitest shortstop ever.  Ironically he won a world series in Arizona—the whitest place on earth.