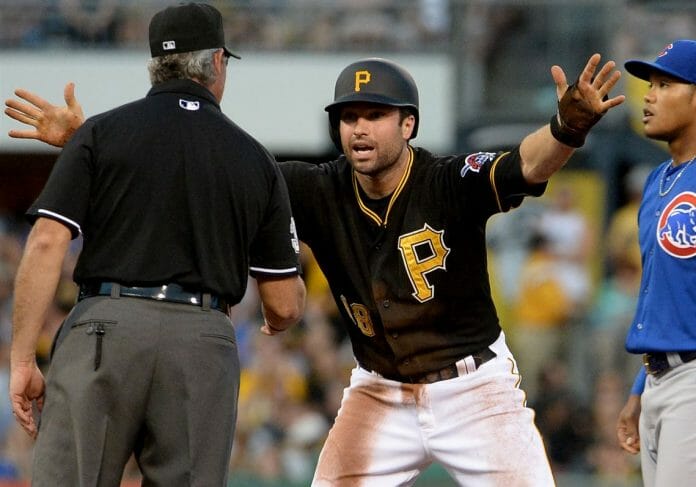 To this day, Tom Walker still feels a great sense of pride when he sees his son, Neil, the star 2nd baseman for the Pittsburgh Pirates step onto the field.

“It’s exciting,” says Tom. “The whole family can’t get enough of it. It’s also exciting for his friends and fans, especially the ones out here in the North Hills. It’s great to see the excitement that the fans have not only for Neil, but for the entire team as well.”

Tom and many family members were among the sellout crowd of 37,958 who came out for Neil Walker’s Bobblehead Doll Night at PNC Park Saturday night. Many of the fans, young kids especially, were donning the Pine-Richland native’s jersey.  During pre-game warmups, Neil seemed very humble about all of the attention.

“I feel very blessed and honored to be from Pine-Richland, make the commute down here, and have this be the place where I play baseball,” says Walker, who is currently batting in the cleanup spot and leading the Pirates with 30 RBI. “This is a job, but at the same time, I still feel like, in a sense, that I’m playing for the Pine-Richland Rams per se.”

Neil’s father played major league baseball from 1972-1977. He tried to use his own experience in the big leagues, both the good and the bad, and offered some insight to Neil about what to expect from playing in the majors.

“He’s been here. He’s done it,” says Neil. “He played in the major league so he knows how demanding it is and tough it can be. His best advice is that the sun will come up the next day no matter what happens. Good or bad, tomorrow is a new day and whether things go well or don’t go well, it’s a situation where you just have to roll with it and continue to plug away. Good things happen when you work hard.”

Hard work has certainly paid off for Neil. Currently, the second baseman is batting .283, and leading the team in walks, RBI, and doubles. Neil was taken in the first round by the Pirates with the 11th overall pick in the 2004 MLB draft, becoming only the fourth local player selected in the first round of the amateur draft and the first since 1978.  Even before his high school senior season at Pine-Richland began, Baseball America selected him a first team preseason All-American catcher.  The 6-foot-2, 205-pound switch-hitting catcher then went on to hit .657 with 13 homers, 42 RBIs and 41 runs scored, while leading Pine-Richland to their first WPIAL Class AAA championship.

As a senior, Neil led the Rams to a WPIAL Class AAA championship and an appearance in the PIAA Class AAA title game, during a season in which he scored 21 touchdowns and compiled 1,150 receiving yards.  He was selected to the Pittsburgh Tribune-Review’s Terrific 25 and the Pittsburgh Post Gazette’s Fabulous 22 in his senior year. Those who saw him play at Pine-Richland knew that he would be a top pick.

“After watching him play in high school, and having seen other players who also played in high school, then went on to the minor leagues and major leagues, that’s when I thought that Neil really had a chance to play and develop and become a major league ballplayer,” says Tom.

Clair Altemus, the athletic director and high school football coach for the Pine-Richland Rams, coached Neil in football and talks about Neil with immense pride.

“Anytime a youngster can come out of your program and get to the echelon of that particular sport, it’s a great and wonderful feeling,” he says. “We don’t get to experience that a whole lot in our careers, but but if you do it one time, it’s certainly worth it. Neil has certainly elevated his game and has taken the city by the storm. I think all of Pittsburgh has adopted him as their own now, but we had him here.”

“I heard the Pirates’ announcers talking recently about what a leader Neil has become,” says Altemus. “They’re just finding that out now. I knew that all along. The other kids just rallied around him in all of the sports he played—baseball, basketball, and football. He always led by example. He was also very humble and gave willingly of himself.”

Walker received his first major league call-up on September 1, 2009 and was a pinch-hitter. His first career hit came on September 6 of that same year. He ended up playing 17 games for the Pirates. Although he spent most of spring training with the Pirates in 2010, he was reassigned back to the Pirates’ AAA affiliate, the Indianapolis Indians. He was called back on May 25, 2010, and has been with the club ever since.

“I was ecstatic that he could be drafted here, go through the minor leagues at such a young age at 18 years old, and then go through all of the challenges of trying to make it to the major league level,” says Tom. “It’s been great seeing him progress—he still has a long way to go—but seeing him get to this stage and to see him doing so well is very exciting for me and the rest of the family.”

Walker played a number of positions in the minor leagues. Drafted as a catcher, he moved to third base and played some outfield before carving his own niche as a second baseman. Despite all that shifting around, Neil was able to maintain his focus.

“The minor leagues are a place where they are not focused on winning or losing as much as developing your talent,” says Neil. “I had a lot of help from great people in the Pirates’ organization.”

Today, Neil says he feels fortunate to be playing in his hometown and in front of his family and friends.

“It’s been a lot of fun and the team is improving,” he says. “I feel fortunate to be playing second base every day for the Pittsburgh Pirates. And more than that, to be able to give back to the community in the sense of playing hard and going out and working hard.”