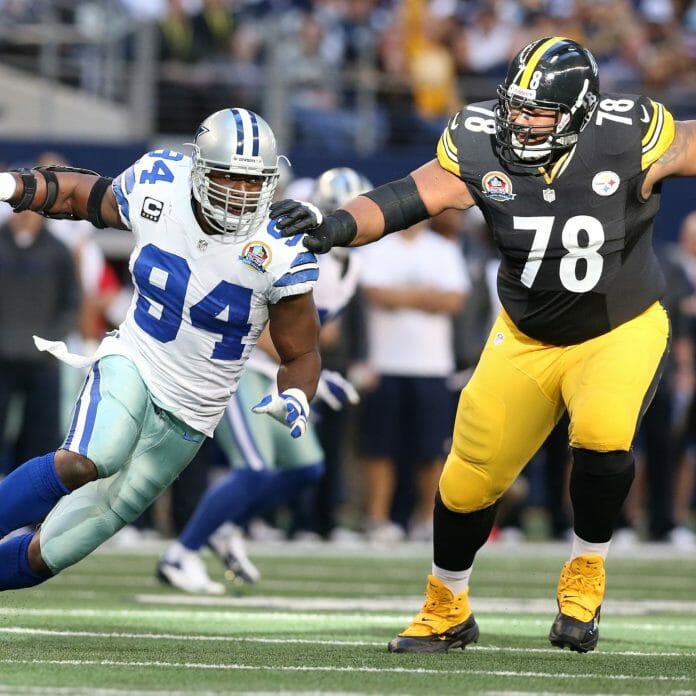 It was the afternoon of the NFL Draft on April 24, 2004 and Max Starks was shooting pool at a friend’s house. Although the University of Florida Gator hoped he would be drafted, a part of him felt that he was a long shot.

After graduating from Lake Highland Preparatory School in Orlando, Starks’ plan was to go to college on a football scholarship, earn a degree and get into the family business of operating a funeral service.

“I didn’t think that I would be drafted in the NFL,” recalls Starks, who had four relatives play in the league. Starks’ father, Ross Browner, played on the defensive line for the Cincinnati Bengals most of his NFL career. Browner’s brothers, Joey, Jimmy and Keith, also played in the NFL, giving the Browner family the most professional football players to come from one family than any other in the NFL.

However, the Pittsburgh Steelers had other plans for Stark.  They selected the behemoth offensive tackle in the 3rd round of the draft, the 75th player taken overall.

“I was exhilarated. It was an unbelievable sensation,” says Starks, trying to explain the emotions he felt that day.  “Coach [Bill] Cowher gets on the phone with me and asked if I wanted to be a Steeler.  And I said, yes, of course, I’d love to. I couldn’t believe it.”

Continuing the family tradition of playing in the NFL makes Starks swell with great pride.

“It’s one of my greatest professional accomplishments,” he says.  “I’m proud to be part of the NFL but even more proud that I made it as a second generation family member.”

Growing up in Orlando, Starks said there were many players he looked up to, including his father.

“Along with my father, you can’t say anything bad about Joe Montana, who was my dad’s college teammate,” he says. “Lawrence Taylor was someone else I looked up to for his athletic ability and his presence on the field.  Another one of my favorites was Emmitt Smith, a fellow University of Florida grad.  I thought all of these guys were amazing players.”

Upon his arrival to Pittsburgh in 2004, Starks was immediately taken with the city and its diehard fans.

“I just love the people here,” he says.  “It’s a very hard working and blue collar town where everybody knows each other.  It’s a city that loves its team and that’s what makes it unparallel to any other city you go to.  These fans bleed black and gold.  There’s a great sense when you walk around the city that you bring such pride to the people here.”

In his first year as a starter, the Steelers won their fifth Super Bowl title, which Starks counts among the highlights of his short tenure in the NFL so far.  When they arrived in Detroit for the Super Bowl two seasons ago, the team practiced in the Pontiac Silverdome which had significant meaning for Starks.

“My dad played in the Super Bowl when it was held in Detroit [Jan. 24, 1982] and to be on the same field that he played on was a special moment for me,” he says.

At 6 feet 8, 337 pounds, not only is Starks among the tallest and biggest players in the league, he has also shown to have an even bigger heart. He started the Max Starks Fund which focuses on children’s literacy and education in the Pittsburgh area.

His generosity wasn’t a surprise to those who know him. Starks began helping others ever since he was a member of the Boys and Girls Club while growing up in Orlando. In ninth grade, he worked as a high school tutor to elementary school children.

As a high school senior, after attending a national service learning conference, Starks started a program to go into underprivileged elementary schools to tutor students for standardized testing.  At the University of Florida, he worked with the Gator Literacy program, going into area schools promoting reading and learning.

In addition to his fund, Starks also volunteers his time with the Gateway Rehabilitation Center, Urban Impact Foundation and the Highmark Caring Place in Pittsburgh, a center for grieving children.

“I’ve been so fortunate to have been given so much,” says Starks. “Giving my time to these organizations and starting my fund was a way for me to give something back. Being in this profession provides me with the opportunity to give back to the community and it’s just one of the things that I enjoy about the NFL.”