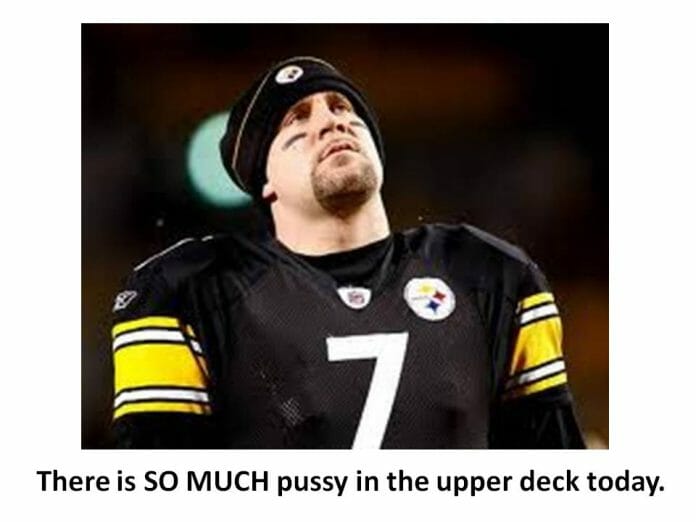 This is an old rant from August 2010 that SmorgasBurgh thought was worth sharing:

Are you a Steelers fan that is torn on whether to root for the Steelers anymore as long as Roethlisberger is on the team? Did you burn/sell/bury your Roethlisberger jersey and vow never to cheer for him again? Have your family and/or coworkers shamed you into denouncing him and the team? If so, then read on. This is an important message that I hope you take to heart.

What the fuck is wrong with you?  How many yards did Roethlisberger pass for last season? How many Superbowls has this guy won already? And you vilify him just because he took some drunken Georgia skank into a bathroom and pressed her face against the toilet seat while he rammed his Lombardi-trophy shaped horse-cock into her more than willing, cum-catching southern twat? Are you insane? If anything, Ben just proved again that he gets what he wants, won’t take no for an answer and can score just about anywhere/anytime. Those are exactly the fucking qualities you damn well better have in your franchise quarterback.

She said “no”? Really? First off that southern drawl that they speak down there might as well be fucking Spanish, and as far as I know, Ben doesn’t speak spanish. They were in a noisy club and she was drunk off her ass. How the hell was Ben supposed to know what the fuck she was saying under the circumstances even if she did say no? How many times have any of us been in a situation where we’re having sex and the girl says something like “get off of my hair!” But in the throes of passion, and with Led Zeppelin IV blaring in the background, we hear something like “PUT IT IN MY ASS!”. That shit happens ALL THE TIME. Once the fucking starts, all attempts of verbal communication should just cease. If she wants to say no, she shouldn’t have taken her pants off!

Besides, your family and coworkers will come around in no time. Did Catholics stop going to church once they learned that inbetween masses their priests are frolicking naked in the back of the church with 10 year old altar boys? No! Did people stop cheering for the US Swim team after they learned that the actual swimming is nothing more than a front for a hugely successful underground pedophile porn racket? No! People tend to forgive and forget. Especially when the subject in question has a rocket arm and can elude on-coming rushers like nobody’s business. So buy a new Roethlisberger jersey.  Renew your season tickets.  And stop being a cunt!  GO STEELERS!