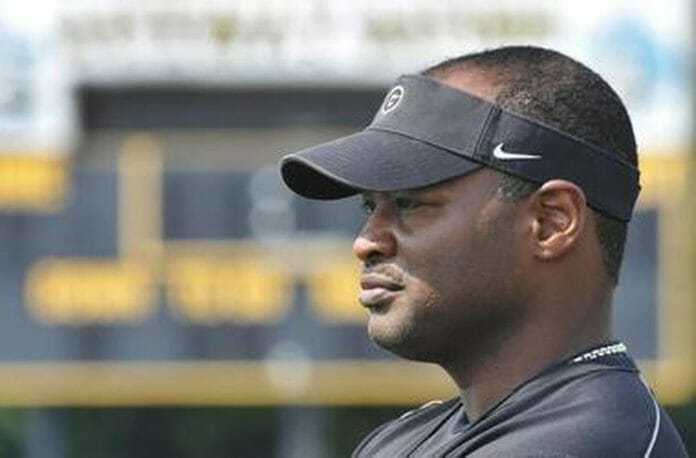 Quarterback Terry Smith’s one-yard touchdown run with 6:21 were the only points the Gateway Gators needed in their nail-biting 7-6 victory over the #1 ranked high school team in the country, the North Hills Indians, in the Class Quad A championship game.  It was Gateway’s fifth championship title.

That was 1986.  Gators fans have been waiting nearly two decades for number 6.

Located in the east suburbs of Pittsburgh, Gateway High School was a perennial power in Western Pennsylvania high school football in the 70’s and 80’s, but they fell into mediocrity after famed high school head coach Pete Antimarino retired.  At one point, the Gators went 11 consecutive years of failing to qualify for the postseason.

Looking to resurrect the program, the school decided to bring in as head coach the hometown hero who scored that touchdown in the title game 18 years earlier.

The strategy seems to be working.

Now entering into his third season, Smith’s Gators are among the pre-season favorites to win the Western Pennsylvania Interscholastic Athletic League (WPIAL) Quad A title this season after reaching the semi-finals in his first season and the quarterfinals last season.  The Gators lost 30-27 to the Indians last year to fall two games short of playing in the title game at Heinz Field.

“I told the team after that loss that this is one of the lessons in life,” recalls Smith.  “You work hard and set goals, but there are setbacks.  You can’t let those setbacks deter you.”

“He made us forget that loss real quick,” adds junior linebacker Mike Barlak.  “After he made it clear it was a disappointment to lose, he told us to remember how it felt to lose that game and use it as fuel for next season.”

Following high school, Smith made an easy transition from quarterback to wide receiver at Penn State University.   After Smith led the Nittany Lions his senior year with 55 receptions for 846 yards and eight touchdowns, he was drafted by the Washington Redskins.  After a brief stint in the NFL, he spent two seasons in the Canadian Football League and one in the Arena League.

Not planning to remain in football, let alone coaching, a former colleague persuaded Smith to become an assistant coach at Hempfield High School in another Pittsburgh suburb.

After one season, he spent four years as an assistant with former Nittany Lions alumnus, Greg Gattuso, at Duquesne University.  After Duquesne, Smith returned to his alma mater in 2001 as an assistant under Tom Organ, and succeeded him after a 3-7 season.

“It really meant a lot to come back,” says Smith.  “This is where the fans cheered for me on the field.  Now it feels like I’m giving them something back.”

Not only does Smith have a pedigree as one of the top WPIAL athletes in his day, but also he brings with him the influence of three legendary coaches whom he played for – Antimarino, Penn State coach Joe Paterno and Redskins coach Joe Gibbs.  That would probably explain Smith’s organized and disciplined style of coaching.

“I’ve played for the best – all of them Hall of Fame coaches in their respective leagues,” he says.  “They had a disciplined style of coaching.  I also learned the game of football from them.  Who better to learn from than the best?”

“He’s a very straightforward type of coach, but he also makes playing football fun,” says junior linebacker Justin Colbaugh.  “He has taught us every little thing about the game.”

Barlak agrees.  “He gets what he wants from each of us.  He’s taught us to play more competitively, but he makes playing fun too.”

Barlak and Colbaugh say that he’s the type of coach that doesn’t sit back and just watch during the practices.

“He really gets involved in our drills,” adds Barlak.  “He’ll practice right along with us like he’s one of the guys.”

“I coach the way I would want to be coached,” says Smith. “I put myself in the players’ shoes and ask myself how do I want my coach to treat me.”

Although winning is high on his list, Smith makes it clear that another reason he enjoys coaching is the impact and the development he has on the players.

“It’s very rewarding when you know you can have an influence on a person’s life and mold them to become a better person.”

Now Smith can have an impact on all of Gateway’s student athletes.  Last fall, he was named the school’s athletic director.

“It’s a great challenge for me, but I have a great supporting cast to help me,” he says.  “I have always asked for a commitment to excellence from my players and now I hope to see that in all of our athletes here.”

Gateway’s quest for a Quad A title begins with training camp on August 8.