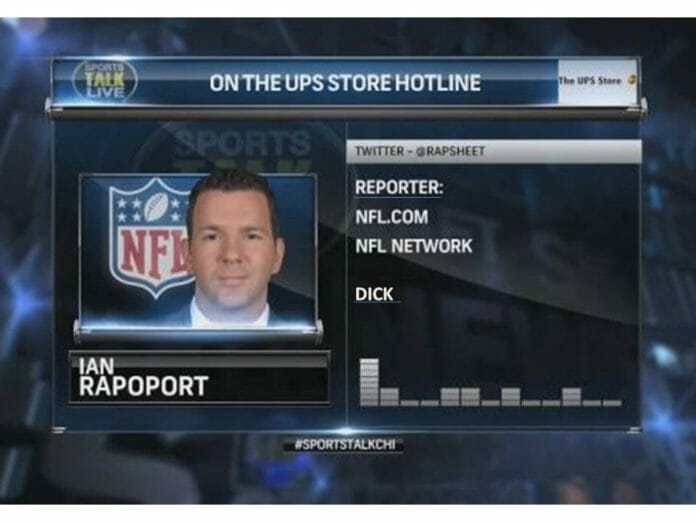 Sorting through all of the misinformation on the Internet is nothing new to us. The old adage, “You can’t believe everything you read” has never been more relevant. For every informative and accurate story out there, there are dozens more that are either completely fabricated or utterly useless. Of course, this problem isn’t limited to just the Internet— it is difficult to find reliable information anywhere anymore.

I gave up on looking for reliable news sources a long time ago, but for awhile I still believed that you could trust the sports stories you came across, especially ones from seemingly reliable sources like espn.com or nfl.com. After all, these are established corporations with reputations to uphold, and how hard is it to report on sports? Who won, who lost, who got traded, how much did this player sign for, who got arrested, etc. It’s pretty hard to get these facts wrong, and these established companies could report the facts, leaving the rumors and speculation to us—the fans. But soon enough, these companies, like all big companies, got greedy and wanted it all—facts be damned. It’s not enough to just report facts anymore—they want to draw us in with the rumors and speculation too. Now, nfl.com reporters can just spout whatever they want because it’s not about reporting facts anymore, but about attracting traffic to your site by any means necessary.

Ian Rapoport’s latest reports on Ben Roethlisberger are a prime example. As everybody in Pittsburgh probably knows by now, Rapoport tweeted that the Steelers expect Roethlisberger to ask to be traded at the end of the season. Rapoport’s title is listed on nfl.com as “NFL Media Insider”. What the fuck does that even mean? Are we supposed to believe that Rapoport has some kind of inside access that others in the media aren’t privy to? The fact is that Rapoport is a former Boston Herald reporter who now lives in Dallas and covers all of the NFL—limiting the amount of access he has to the Steelers organization and Ben Roethlisberger. Lots of local Pittsburgh media who cover the Steelers on a daily basis have been quick to dismiss and even criticize Rapoport. That should go a long way in telling you how full of shit he is. Dejan Kovacevic of Trib Total Media said that there is “zero veracity” to Rapoport’s report. Roethlisberger himself adamantly denied the reports twice and Mike Prisuta of DVE writes that he believes Ben is sincere. Roethlisberger’s agent also denied the report. Even more telling is that Ian Rapoport’s colleague at the NFL network, Mike Silver, (also a dick, btw), came out and contradicted Rapoport the same day by saying that he was told that “Roethlisberger wants to finish his career as a member of the Steelers.”

Why would Rapoport make up this story? It’s likely that he had a conversation with someone remotely affiliated with the Steelers (Cafeteria worker? Maintenance man? Fan on the street?) who was talking about Roethlisberger’s frustrations with losing this season and this “source” flippantly opined that he wouldn’t be surprised if Ben asked to be traded. Rapoport saw this as a golden opportunity to attract attention and ran with it because he is a huge dick. Look at his face—it has “I am a huge dick” written all over it. Some people just have that kind of face. Also Jeremy Piven and Warren Sapp. 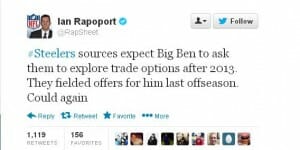 He said the Steelers “fielded offers for him last offseason.” Holy shit, that is huge news! I had no idea that he was on the market. How was that not reported before? BECAUSE IT’S FUCKING BULLSHIT. Dickface comes out with this backtracking tweet just minutes later:

So they have “not had internal discussions about trading (him)”? What the hell? He just said they did. Which is it? Why is he contradicting himself? That’s why nobody should believe any of the bullshit that comes out of his stupid dickface.

Then instead of just letting it go, he tweets this after Art Rooney II makes an official team statement denying the team has any plans to trade Roethlisberger:

Is he serious? Once again he denies reporting it, then he coyly points out Rooney’s choice of the word “plan”. Are we to insinuate that they don’t have intentions of trading him but wouldn’t pass up a good offer if presented to them? I honestly can’t believe he had the gall to add that. I am so annoyed and confused by this garbage reporting.

Rapoport can now stand back and admire the mess he created, no doubt with more popularity and more twitter followers. Mission accomplished, right? Too bad Roethlisberger is once again left to answer uncomfortable questions and a fanbase is left confused and frustrated.

Ian Rapoport can get hit by a subway train. Here is that video of him getting hit in the face by a football.

I am tired of Rapoport and everyone like him trying to drum up attention and inflate ratings with bogus stories and bogus sources. If you can’t divulge your “source” then just shut the fuck up. We don’t want to hear about it. And if that source happens to be some random TGI Friday’s customer named “Craig” then don’t even bother.