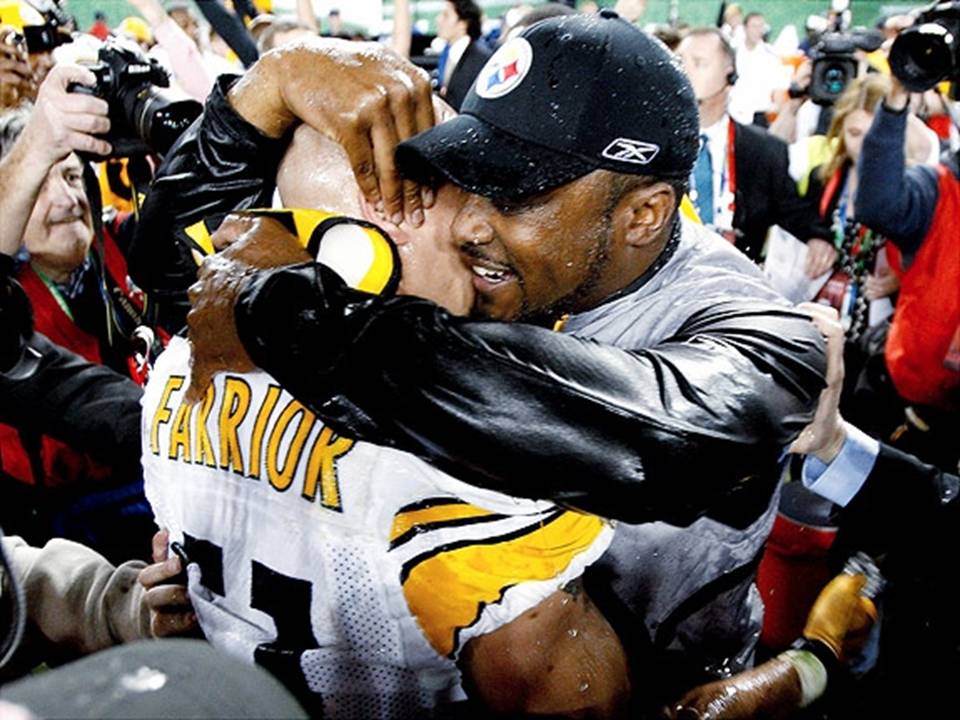 It took only two phone calls on DVE after the Steelers game for somebody to say that Tomlin needs to go and he only won the Super Bowl because it was “Cowher’s team”. HOLY SHIT. Nothing pisses me off more than some mouth-breathing yinzer-racist spouting off this stupid statement. I respect David Todd, but I was disappointed that he didn’t rip into the caller. Coaching in football is more critical than any other team sport. I don’t care how talented the roster, an NFL team still needs a great coach to win a championship. If I coached the 70’s Steelers, they wouldn’t have won a single game. If Romeo Crennel coached them, they wouldn’t have done much better. Chuck Noll was a great coach. That’s why they won four Super Bowls. Bill Cowher was also a great coach. (Contrary to popular belief, his playoff record is exceptional.) He won the Super Bowl because his hard work paid off. Mike Tomlin, believe it or not, is also a great coach. To say that he only won with Cowher’s team is petty and stupid.

Mike Tomlin did not win a ring just because he had Cowher’s players. I will bust that myth once and for all.

1. Bill Cowher was 8-8 in his last season. He did NOT ride off into the sunset after winning the big one like most yinzers would have you believe. His last team underachieved and struggled. He did not gift wrap the Super Bowl for his successor. They were a team in need of focus and discipline.

2. Mike Tomlin won the Super Bowl in his second season– three years after Cowher did. That is a long time in this era of free agency. HALF of the starters on offense and defense were different, and a lot of great players were no longer on the team. No Bettis. No Feneca. No Hartings. No Porter. No Kimo. No Chris Hope. That’s a pretty good group of leaders that Tomlin did without.

3. Tomlin made it BACK TO THE SUPERBOWL TWO YEARS LATER. I suppose that was Cowher’s team too? He didn’t win, but just getting there was significant amid all the Millidgeville bullshit that followed that team all season.

4. Kevin Colbert compiled the rosters that won the last two Steelers Super Bowls. He is and was the GM and a great one at that. To say that “Cowher’s players” or “Tomlin’s players” won, is incorrect. They were Colbert’s players. I am certain both coaches had input into personnel matters, but it is widely believed that Colbert has the final say.

5. In Tomlin’s six seasons, he has made the playoffs four times and has never had a losing season. As I previously mentioned, he has already made it to two Super Bowls, winning one. Even as recently as last season, his worst, the Steelers were having success before Roethlisberger’s injury. If you can’t recognize that Tomlin is a great coach based on these accomplishments, then you are an ass. Or a racist. Probably both. SO SORRY THIS GUY HASN’T WON FIFTEEN SUPER BOWLS ALREADY YOU FUCKING JAGOFFS.

This season will be an interesting chapter in Tomlin’s career. They are off to a horrendous start. The offense seems determined to establish the run, which is an archaic concept and even more befuddling considering that Ben Roethlisberger is one of the league’s best quarterbacks and they do not have any competent running backs. (That would be like ‘Parks n Rec’ deciding to become a serious political drama next season.) If the Steelers do not start putting some points on the scoreboard this season, then I may begin to question Tomlin’s strategy. But I won’t ever discredit his Super Bowl championship. He’s earned that. He’s a great coach.

Also, this has nothing to do with Tomlin, but Adrian Peterson is Superman and the Vikings are the only team in the league that should have a run-first mentality.