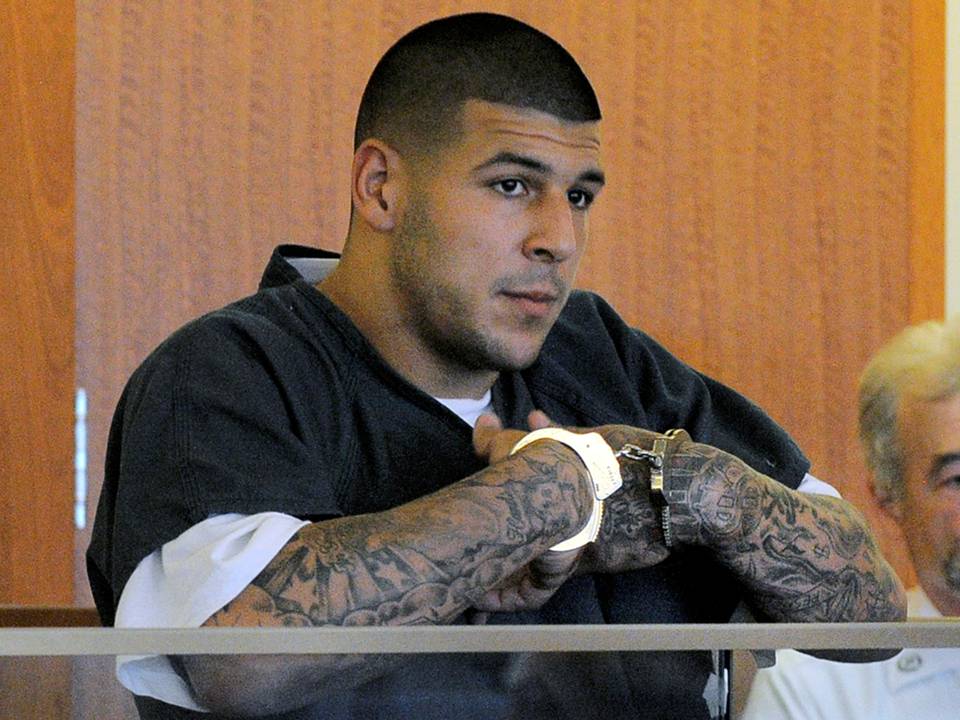 I have not had the time to follow this Aaron Hernandez thing too closely, which is a shame because I love when bad things happen to the Patriots who are a bunch of cheating assholes. I can’t wait to see them go 14 – 2 in their shitty division and give their fans false hope and then watch them get their asses handed to them in the playoffs again. That about sums up the fate of the Patriots every year until Gisele makes Thomas Edward Patrick Brady, Jr retire.

Based on what I did learn about the Hernandez situation, I can deduce that he is scum. However, it cannot be understated how much of a moron he is. He dropped the ball on this whole murder thing. If I was in his shoes– smoking gun, standing over the body– this is how I would have handled it:

1. Blame the wife. My wife and I share just about EVERTHING. Same house, same bed, same cars, same bank accounts, same kids, etc, etc. Her fingerprints are already all over all of my shit. If I ever needed to pin a murder on someone else– it would be her. AND IT WOULD BE SO EASY. I love her and all, but if it came down to one of us having to face prison time, I would definitely pick her. “Don’t worry kids, Daddy’s going to find us a new Mommy!” I would blindside her with it too. I would lawyer up before she even knew a crime was committed. She would be so confused when the cops come knocking and take her away. Women probably treat each other much better in prison than men do anyway. They are so gentle and loving. Men are crazy assholes. I wouldn’t last a day. I probably wouldn’t last a day in a woman’s prison either. Hernandez isn’t married but he has a girlfriend that lives with him. He should have thrown her under the bus.

2. Or pin it on someone in your crew. ISN’T THAT WHY YOU HAVE AN ENTOURAGE? A group of lowlifes ready to take the fall for you? I don’t care how– have those guys draw straws or some shit– but one of them NEEDS to take the blame. You’re not doing the rest of your boys any good in an orange jumpsuit. Ray Lewis may be a fucking murderous hypocrite, but at least he got it right. It took him like two seconds to finger his “buddies” for his crimes.

3. Have an alibi! Holy Shit, if you are going to “orchestrate a murder” DON’T RIDE ALONG WITH THE FUCKING MURDERERS WHEN THEY DO IT. He should have been on a fucking airplane flying to Big Tit, Idaho when this all went down. Or at least playing mini golf or something. Just not in the same fucking car at the same fucking place. Dumbass.

4. Burn everything! The body, the car, the house, the clothes. Burn it all. When you have blood on your hands, fire can be your best friend. What are police going to do when they come around and there’s nothing but ashes? Nothing. They have to let you off scot-free. It’s in the Constitution.

5. Just play football. I know this has been hashed over and over by everyone and their mother– but I will reiterate it one more time– WHEN YOU’RE GETTING PAID MILLIONS TO PLAY FOOTBALL, PUT THE FUCKING GUNS DOWN. I understand that Bill Belichick is a dull, humorless, ballbusting prick. But can’t you just tolerate him for a few years? For the love of the game? For the huge paychecks? And if he’s really that much of an asshole, Hernandez could have just offed him. He was just too fucking stupid to understand how good he had it. He probably wanted to be like Scarface and have his own empire– but that shit didn’t really end well for Scarface either did it? Did all these gangbangers not finish watching the whole movie?

All that being said– and I know a man is dead which is tragic– but I am grateful to Hernandez for giving us this sensational story. Not since Rae Carruth have we been so blessed. I already know I am going to hell.

How Clutter Affects Your Mental Health and How To Fix It

Tips on How To Make Your Home a Place To Entertain