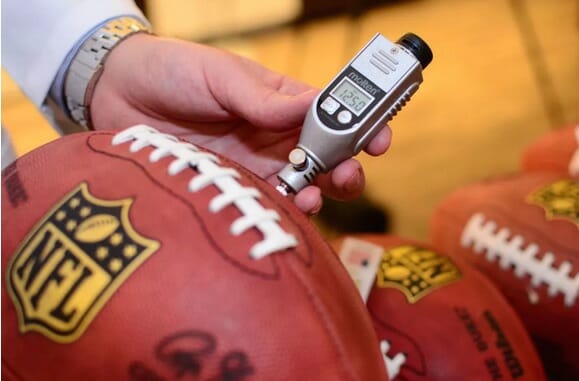 What is going on with Deflategate? It’s been a month since the AFC Championship game and still no word on the results of the investigation? The Brits didn’t investigate Jack the Ripper this long. After a few weeks they threw their hands up and said, “Well he’s a clever chap, that one! Off to the pub now, mates. Well done, the whole lot of you.”

I know I haven’t written anything in awhile, but I didn’t want to let this Deflategate thing go without finally posting something about it. (My hate for the Patriots runs deep.) I know, it’s always the same excuse, but I’ve been busy. On top of everything else, we had to buy a new car. We had to get rid of one of our old cars because it’s beat to shit and not worth fixing. I cleaned it out and filled up almost three whole boxes with stuff. Holy shit! I had no idea how much crap we drove around with. Most people don’t have that much stuff in their apartment. I put all the boxes in the new car.

When this all started, I assumed the NFL knew the Patriots were guilty but they didn’t want to put themselves in the uncomfortable position of having to suspend Bill Belichick and/or Thomas Edward Patrick Brady, Jr. for the Super Bowl. Obviously, they wouldn’t have done that, but there would have been awkward questions about it over and over. So I figured the NFL would wait until a week after the Super bowl to inform everyone that the Patriots had cheated again, and would lose a third round draft pick and pay a $100,000 fine which would go to that organization that tells kids to go play outside while Daddy sits in front of the television and yells at Dan Dierdorf. Fucking Dan Dierdorf! That’s how I expected it all to go down, but here we are, a month later, still waiting.

The day after the story first broke, NFL executive Troy Vincent said the investigation would be wrapped up in a couple of days. They must never let Troy Vincent in on any of the important meetings. (Assuming there are any important meetings. I always picture NFL executives just lounging around drinking scotch and smoking cigars while off duty Cheerleaders fellate them. It’s not like they actually have anything important to do anyway. It’s a fucking game, after all. They could royally fuck up and nothing would change. Hell, anytime they actually do have anything to do, they fuck it up anyway. My dream is to one day be an NFL executive.)

Here is what we do know about Deflategate:

1. The Colts blew the whistle on the Patriots prior to the game.

It’s not like the “cheaters” label is unwarranted– because another NFL team started all this. And the Colts accusation came a week after the Ravens called attention to their questionable ineligible receiver tactics. All the Patriots apologists act like this was all a grass roots movement from the fans. Maybe we wouldn’t keep calling the Patriots cheaters if other teams (with much more to lose) would stop doing it too! It’s crazy that Patriots fans immediately absolved the team of any wrongdoing when Belichick and owner Robert Kraft (bless his dead whore-wife‘s soul) came out and denied the allegations. As if you can’t be both a cheater AND A LIAR. A guilty man would never so boldly pronounce their innocence!

2. The PSI in 11 of the 12 balls the Patriots used in the AFC Championship were below the legal limit at halftime.

ESPN’s Chris Mortensen first reported that the Balls were two PSI below the legal limit. Since then reports have said that the PSI’s were only a few ticks below the minimum. Whatever the hell that means. Mortensen still stands by his report. Also, the Colts’ balls were also tested and were all legal. Some argue that the cold weather caused the drop in pressure for the Patriots’ balls, as they only fill them to the required minimum before games. Scientists have different conclusions on the weather theory.

3. Scientists are just as fucking stupid as the rest of us.

When I was a kid, I believed everything I read in any of my Science textbooks. It had to be true because it was in a book and they don’t just let any asshole write a book. I’m still a big believer in science. I believe Dinosaurs roamed the Earth millions of years ago. I believe in evolution and I believe in climate change. (That’s all I believe. I’m still relatively undecided about everything else.) I believe all that stuff because most scientists tell us it is so. I trust those nerds! But how the fuck can ten different scientists have ten different opinions on how temperature affects the PSI of a football? For the first time in our lives, we have the chance to see all those physics and chemistry formulas applied to a legitimate, real life problem and all those guys dropped the fucking ball! Do they just not know anything? How the hell did we land on the moon? Or are scientists really just a bunch of whores whose opinions can be bought and sold willy nilly? How can we believe anything these guys tell us now? What if frogs are really mammals? Mammals!

4. The Patriots are still a very good team, regardless of how much they cheat.

It pains me to say that. I hesitate to call Thomas Edward Patrick Brady, Jr. the best quarterback of all time, though, because of the way he curls up in the fetal position anytime there is the slightest bit of a pass rush. The Patriots do a great job of protecting him, though, and he excels because of it. He is at least in the top three of all time. I would still say either Dan Marino or John Elway is the best of all time. I think you could have put those two guys on any team and they would still make the playoffs. They also didn’t have the benefit of all the rules favoring quarterbacks today.

5. Pete Carroll fucked us all over with that play call on second down at the goalline in the Super Bowl.

Regardless of what the final verdict is on Deflategate (if we ever do get a verdict), the only thing we’ll ever really know for sure is that Belichick is the devil. Nine out of ten Scientists agree.