THE NFL IS A HAPPY PLACE 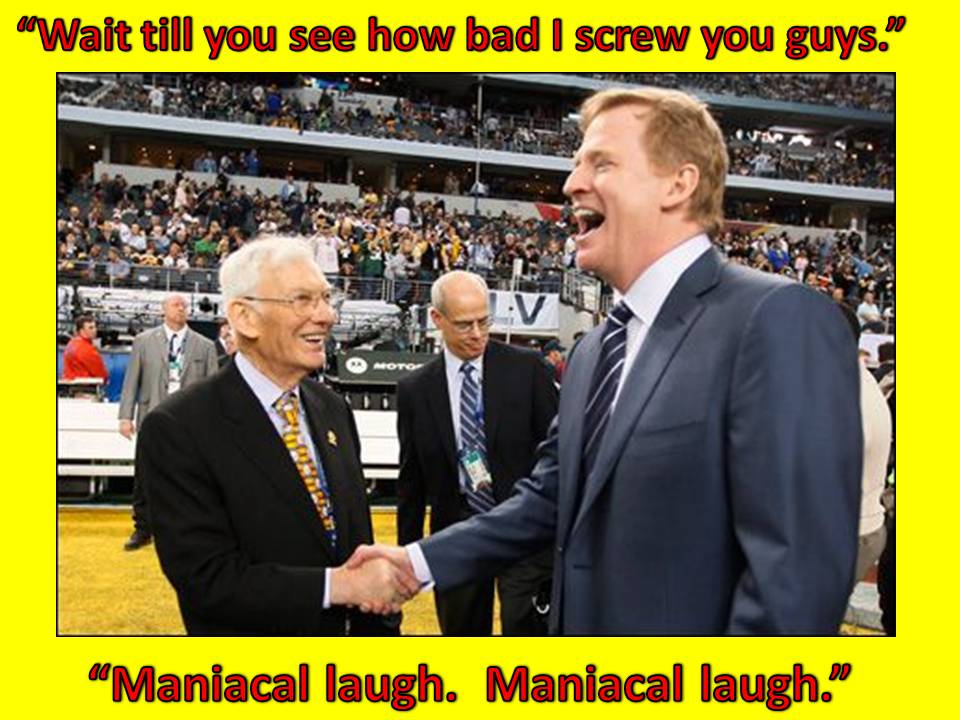 I don’t pretend to understand the NFL’s rules on protecting the quarterback anymore. There is no consistency whatsoever.  I watched Elvis Dumervil of the Broncos deliver a vicious hit on Tom Brady Sunday.  A glorious moment for all NFL fans!  Dumervil buried his helmet right into Brady’s chest hitting him so hard you can actually HEAR Brady shit himself. 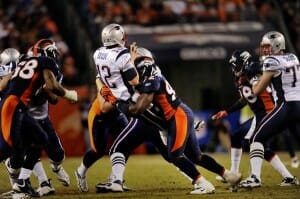 As much as I enjoyed the hit, and believe it was clean, I couldn’t help thinking how much it reminded me of the hit that James Harrison delivered to Ryan Fitzpatrick last year.  A hit that he was flagged and fined for and ultimately contributed to his suspension.  Harrison even tweeted to this effect after seeing the Dumervil hit.  (Sidenote:  Harrison’s tweet last night during the blackout was tremendous!)  Dumervil was not flagged.  He has yet to be fined and likely will not be.  The announcers did not make a big deal about the hit being illegal.  Usually when the announcers make a huge stink about it– you can expect a fine. Ndamukong Suh’s severe 2 game suspension was most likely the product of Joe Buck and Troy Aikman’s over-reactions during the nationally televised Thanksgiving game. Roger Goodell is a gutless, greedy little bitch who only cares about the image the league projects during broadcasts and the resulting profits the league will reap from protecting said image.  He wouldn’t want to let on to middle America that the NFL IS FUCKING DANGEROUS.

Another hit I want to address is the one that Roethlisberger sustained against the Browns. The one that resulted in his high ankle sprain and greatly contributed to the Steelers loss to the 49ers.  From the NFL Rule Book:  No defensive player who has an unrestricted path to the quarterback may hit him flagrantly in the area of the knee(s) or below when approaching in any direction.  That is EXACTLY what happened to Roethlisberger.  I am dumbfounded that there hasn’t been any outrage over the hit.  It was flagrant and it was below the knee.  By the NFL’s rules, it was illegal and not that it should matter– but it resulted in a significant injury! 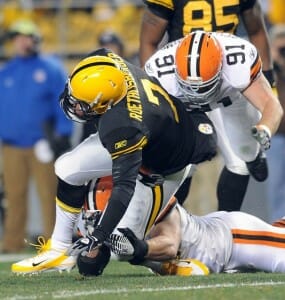 I don’t know who it was from the Browns that hit him…HOLY SHIT, I don’t know the names of ANY Browns defenders anymore– that’s how irrelevant they have become!  Anyway, the Browns didn’t draw a penalty or fine.   Roethlisberger was out of the pocket on the play– but so was McCoy when Harrison hit him (and subsequently got suspended). 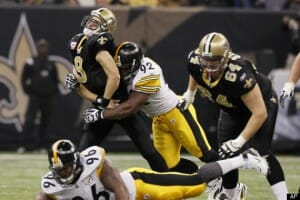 I know this issue has been rehashed over and over by now.  And I know it sounds like I am another whiny Steelers fan who thinks the league is out to get them.  (Why does my Spell Check keep flagging the word “Steelers”?  IS THAT GOODELL’S DOING?)   But as long as Goodell continues to be inconsistent and arbitrary in his enforcement of penalties and fines and suspensions– then this is going to continue being a huge problem for the league. For Harrison to actually get suspended for hits that happen all the time is ASININE. Now he faces a multiple game suspension for the next infraction?  ASININE.  The NFL is not safer. Just stupider.  Not that I expected anything else from that bumbling twat Goodell.  After all, he’s the same man who hired JOHN MADDEN as a Special Advisor on player safety. What a fucking pair.

3 thoughts on “THE NFL IS A HAPPY PLACE”