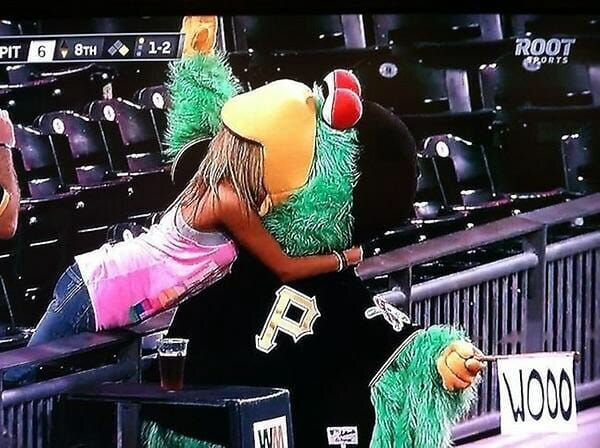 As baseball season winds down, I just wanted to tell one more story about when I used to work for the Pirates. If you missed the previous ones, this one is about the no-hitter in 1997 and this one is about a golf-cart mishap. I worked for the Pirates through high school and college doing odd jobs as a member of their support staff. By far, the worst job was the Pirate Parrot’s assistant. Weird, right? You would think hanging with a man dressed as a giant cartoon bird at a sporting event would be fun and exciting. NOPE. More like stressful and exhausting. Because the Parrot was a DICK.

There were many Pirate Parrots over the years, including the one who sold coke to players in the 80’s. I like to think he did it in full costume and made a really elaborate show out of it. Look, I found this baggie in your ear! When I was there we had one particular guy who played the Parrot for only about 2 full seasons. He took the job way too seriously and expected perfection out of himself and his assistant every night. Which is even more crazy considering a mascot’s job is pretty much to do goofy shit and entertain little kids. He could stumble around like a drunk all night and JOB WELL DONE. But this guy wanted no part of it. Every night was scripted inning by inning like a Broadway show. And if you did anything slightly wrong during that night’s “performance” he would go apeshit on you. As if anybody in the stadium gave a shit about the mascot! There was a second guy who filled in about once a week and he was cool. He didn’t take his job too seriously and took a lot of breaks, ducking into the media room often so we could just sit and watch the game. That was exactly how the Parrot should act. The regular guy, NAZI PARROT, took no breaks. He was so intense. An ER doctor shouldn’t be that intense.

My job was first and foremost to follow him around and make sure that nobody tried to rip his head off or push him down the steps. Also I was supposed to make sure that he didn’t accidentally trample any little kids– which was always a very good possibility given that he rushed through the stands at full speed in an effort to stick to his elaborate itinerary. I was a teenager working a part-time summer job and I had absolutely no training or instruction on what to do in either of these situations. (That’s your Pittsburgh Pirates, folks.) I always imagined punching out some drunk who tried to accost the Parrot, but I’m pretty sure that would have been frowned upon by management. And if some little kid smacked his head off the concrete trying to flag down the Parrot for an autograph, my medical skills were limited to clasping my hands on my head and screaming OH MY GOD OH MY GOD OH MY GOD. Fortunately, neither of those things ever happened. They did give me a walkie-talkie, which always made me feel super important. I supposed I could have used it to hit somebody in the face.

That part of the job was actually okay, but the part that really sucked was being his assistant during the t-shirt toss, hot-dog shoot and whatever other side-shows were planned for the day. If you’ve never seen the t-shirt toss, it involves using a giant rubber sling-shot to launch balled up t-shirts into the crowd. The sling-shot is obviously meant to be manned by two people, but NAZI PARROT wanted none of that. He made his assistant lean forward with his arms outstretched at an impossible angle holding the sling-shot while he used his full body weight to pull back and shoot t-shirts as far as possible. The slightest mistake by either party would cause you to get nailed in the back of the head at point blank range and it fucking hurt. He would also yell at you afterward for making him look foolish. All of this in front of 4,000 fans. The hot-dog shoot wasn’t as physically demanding but was still stressful and difficult. You had to carry a bunch of hotdogs and keep pace with him loading his gun while he yelled at you the whole time to do it faster. If you didn’t load the gun just right, the hot-dog would just trickle out like a dud and he would be pissed. YOU’RE WASTING PERFECTLY GOOD FOOD, KID.

If you think I am being a whiny little bitch about this, and the job doesn’t seem so bad, I assure you you are wrong. There were several of us who took turns as the Parrot’s assistant and we all dreaded it– except when the nice backup Parrot worked. We couldn’t have been happier when NAZI PARROT was fired for allegedly groping a woman during a game. This may have been a horrible rumor, as my google search yields nothing, but that was the scuttlebutt around the stadium back then. I honestly didn’t believe the rumor because he took his job way too seriously and I doubted he would do anything to jeopardize it. He probably got fired for yelling at some female fan for smiling at him and ruining his concentration during some goofy dance routine. YOUR SHINY TEETH ARE DISTRACTING THE MAESTRO, LADY. That, I could believe. By the way, before you jump to conclusions, NAZI PARROT was not Tim Beggy, the guy from Road Rules who got fired for skinny dipping. That guy was actually pretty cool. Also, he was not a Parrot, but a guy dressed as a Pirate. You can never have too many mascots when you’re losing a hundred games.

As much as I despised working with NAZI PARROT, I was grateful when he asked me if I could fill in for him at a gig he couldn’t make at Idlewild Park. He said I’d just need to shake some hands, hug some kids and I’d get paid fifty dollars for about eight hours of work. Are you fucking kidding me? Of course I would do it. My first thought was I’LL MAKE A MUCH BETTER PARROT THAN THIS ASSHOLE. Imagine my disappointment when I went to pick up my costume and it turns out I wasn’t going to be the Parrot but some raccoon. Buster, the Waste-Busting Raccoon, to be precise. It was the mascot for some recycling company. I don’t remember which, but my google search turns up nothing. They’ve probably ditched the mascot since. I wasn’t going to be the Parrot, but some corporate shill. I guess the Parrot moonlights as other mascots, which seems kind of funny. NOT JUST ANYBODY CAN BE THE RACCOON–WE NEED SOMEONE WITH EXPERIENCE. As I proved that day, any asshole can put on a costume and be a mascot for a day.

It was a blast. Apparently a man in a raccoon costume is a ROCK STAR to little kids. I hammed it up as much as I could. I gave hugs, high-fives and strutted around like I owned the place. I played all the games for free, posed for a ton of pictures and put smiles on a ton of faces. I remember one old lady in a wheel-chair had a good laugh when I grabbed the handles and took her for a quick spin. A woman nearby with a baby stroller did not seem amused and hurried away before I could do the same with her precious baby. Dressed as I giant raccoon I am pretty sure I would not have made it very far if I had decided to make a break for it with her stroller.

The only problem was the heat. Holy Christ was it hot! It was August and the temperature was in the nineties and I was dressed from neck down in thick fur with a giant head and a long heavy tail. I don’t know what that costume weighed, but it was heavy and I was pouring sweat from the moment I put it on. My little brother and his friend came along to help (I did not give them a cut of my fifty bucks) and their job was pretty much to just find first aid stations so I could take a water break every 15 minutes. Every chance I got, I took that head off and downed a bottle of water. Being a rock star is not easy. I had a lot of fun, but I was relieved when my eight hours was up.

By that point I was drenched in sweat. All the way through the costume. I was wet. I probably looked less like a raccoon than a giant rat that crawled out of the sewers to terrorize the children. One last little girl approached me for a hug. All I could think of was that I was way too sweaty and she should NOT be touching me by any means. Probably a health code violation. I got down on one knee and as she hugged me, this is exactly what she said: “You’re stinky…..but that’s okay!” She gave me a big hug anyway. When she told her parents about it on the car ride home, they probably envisioned a drunken, urine-soaked hobo inside that costume– horrified of the thought of him embracing their little angel. I made quite the impression. No wonder that company abolished the mascot. RIP Buster.