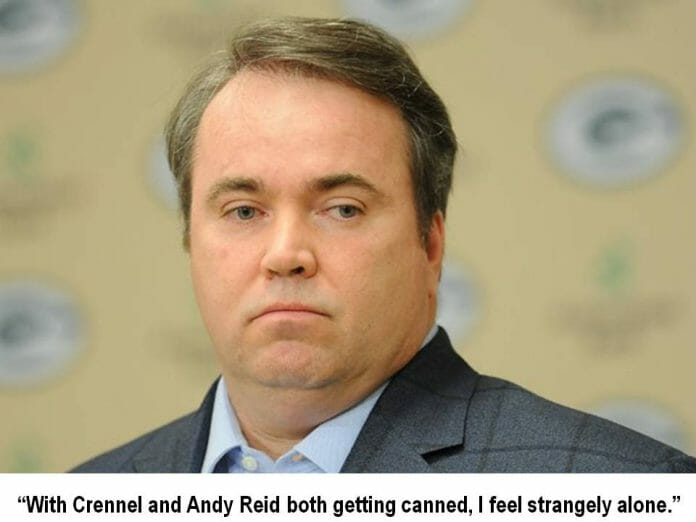 Everyone remembers the debacle on Thanksgiving when Jim Schwartz (who inexplicably has not been fired yet) threw a red flag on a scoring play that would have automatically been reviewed. Because of some bizarre rule, once Schwartz threw the flag, the play could no longer be overturned and the Texans’ Justin Forsett was awarded a bogus long touchdown after getting up off the ground and running to the endzone after ALREADY HAVING BEEN TACKLED. Many of you may not know that years ago the NFL rule was that a player not only had to be tackled, but held down on the ground like getting pinned by King Kong Bundy. I’m not making that up. That was the rule. You can watch some old black and white NFL clips where runners take a hard shot and get knocked on their ass but then get back up and keep running just like Justin Forsett. I can only assume that non-replacement referees that worked Thanksgiving were good old union boys who have been around since those old days and did not know that rule has been changed like 80 years ago. They still deserve the huge raises they got, though, don’t they?

Let me go off on a tangent about Jim Schwartz. You can skip this paragraph if you don’t know who Jim Schwartz is or if you hate Jews. Despite having a very talented roster consisting of several very high draft picks, he has made the playoffs once in his four years as head coach of the Lions. That was in 2011, when they finished 10-6 and were promptly blown out by the Saints in the playoffs. That was also the only year that he has not had a losing record. He did inherit an 0-16 team, but after going 2-14 his first year, 6-10 in his second and 10-6 in the aforementioned playoff year, they regressed back to 4-12 this past season. That should be reason enough to get fired. BUT THERE’S MORE! In that Thanksgiving game, he not only made the major mistake in throwing that illegal red flag (Mike Smith of the Falcons did the same thing just four days prior so even though it is a stupid rule, all of the coaches should have been well aware of it), he also elected to attempt a potential game-winning 47 yard field goal ON THIRD DOWN. Holy fuck. How stupid could he be? Jason Hanson missed the long field goal and the Lions ended up losing the game. I do not watch a lot of Lions games, but after seeing Schwartz lose the game for his team by making two bone-headed mistakes, I can only wonder how many other stupid decisions he makes on a regular basis to contribute to their losing ways. He also has no idea how to handle Ndamjkong Suh’s anger management issues and despite his extensive background as a Defensive Coordinator, the Lions consistently rank among the worst defenses in the league. I am not a Lions fan in the least, but I have to wonder again out loud HOW THE HELL IS THIS MAN NOT YET FIRED? BTW not that it matters, but Jim Schwartz is not Jewish.

Now let’s get back to the matter at hand and a team I fucking despise, the Green Bay Packers. After Mike Smith made the blunder of throwing the illegal challenge flag and Schwartz followed with the same mistake on a nationally televised game, the NFL acknowledged that it is the dumbest rule ever but elected not to change it until after the season which makes about as much sense as shitting your pants at work on a Monday and wearing the same smelly soiled pair everyday for the rest of the week. (Everyone knows that the solution to this predicament is to sneak a stapler into the restroom and fashion a makeshift pair of pants with paper towels after flushing your shit-streaked ones down the toilet. In other words, the NFL should have fixed the fucking problem as soon as possible.) Even though the NFL chose not to change the rule, there’s no way any head coach would be stupid enough to make that mistake again, right?

In one of the most entertaining games of the year, last Sunday’s contest between the Vikings and Packers, dumbass McCarthy tried to challenge a turnover by throwing the red flag. As was the case in the previous two interpretations of the rule, the play should have no longer been eligible for review and the call on the field – although horrendous—should have stood. The Vikings should have been awarded possession on a fumble by the Packers and Mike McCarthy should have been subjected to even more verbal abuse by his bipolar Quarterback. (Here is a gif of Aaron Rodgers after the play presumably calling his own coach a fat fuck.)

But because the Green Bay Packers are the NFL’s favorite franchise, (owned by the People for the People!) Mike McCarthy was given a mulligan and the play was permitted to be overturned by replay even though it was against the rules. A RULE IS A RULE NO MATTER HOW FUCKING STUPID. It was obviously not a fumble, but nobody in the world would have felt any sympathy for the Packers for getting jobbed by the refs because of McCarthy’s horrible blunder. Even the Packers Aaron Rodgers wanted to punch McCarthy’s fat face for his stupidity. The Vikings still fortunately won the game, but IT BLOWS MY MIND THAT THE NFL BLATANTLY IGNORED THE RULES IN THE PACKERS FAVOR. No surprise that Mike Pereira on FOX defended Referee Mike Carey’s bullshit explanation because Pereira would take any means necessary to make sure that neither he nor his fellow union buddies look bad during a telecast. Carey said that the play was already buzzed for review, so he still allowed it despite McCarthy’s illegal red flag. WHAT THE FUCK??? No shit! Every turnover or touchdown is reviewed. That’s the fucking point of the illegal red flag. It can’t be thrown after a turnover or touchdown. Again, it’s a stupid-ass rule, but IT’S STILL A FUCKING RULE THAT SHOULD BE ENFORCED FOR NO OTHER REASON THAN TO MAKE STUPID COACHES FEEL EVEN STUPIDER.

This is not the first time that the Packers have been given a pass by the NFL, though. We all remember the high profile rape allegation against Ben Roethlisberger back in 2010. He was astoundingly suspended for four games by Roger Goodell despite not even being arrested in the matter. The inaccurate and one-sided media reports were enough to convince Goodell to act irrationally in handing out a punishment. That same off-season, however, multiple Green Bay Packers were also accused of raping two women in a rented condo after a golf outing. The accusations were every bit as ludicrous as the one levied against Roethlisberger, and also did not result in any charges. Unlike the situation with Roethlisberger, however, the Packers were given a free pass by the NFL and none of the players involved were suspended. Both incidents were very similar, but Goodell only saw fit to punish the Steelers. The Green Bay incident did not receive as much media attention and therefore Goodell didn’t feel it necessary to handle it in the same manner as Roethlisberger’s case.

Is there some kind of conspiracy in the NFL favoring the Packers? Probably not. If there was then Goodell would have over-ruled the Seahawks touchdown on the simultaneous catch early in the season and personally delivered an apology to Aaron Rodgers while jerking him off. That doesn’t mean that the red-flag incident from this past weekend should just be glossed over. It was atrocious. It was an error that could have cost the Vikings a playoff spot. Goodell has shown time and time again that the NFL can be inconsistent, irrational, unfair and fucking insane. He’s the one presiding over this mess, so I hate him the most.