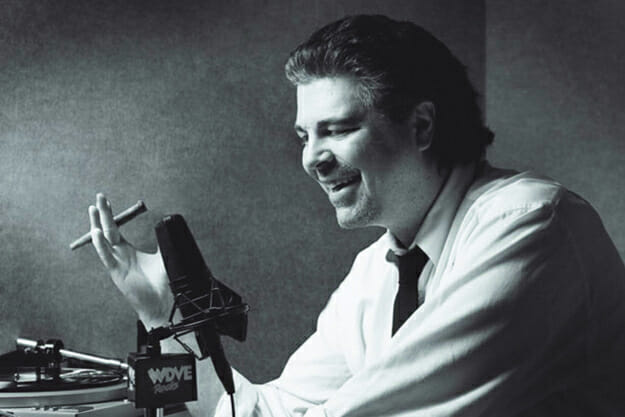 I pretty much listen to the DVE Morning show every day.  Everything about waking up and driving to work sucks except listening to their show.  In fact whenever I get work, I usually park my car and just sit there listening—  partly because I dread going into the office but mostly because I don’t want to turn off the radio.  It’s that good.  Finally I make my way into work after realizing that sitting there in the parking garage all that time might begin to look suspicious.  THAT STRANGE MAN IS JUST SITTING IN HIS CAR WAITING FOR SOMEONE TO RAPE.

Now Clear Channel has gone and fucked with the DVE Morning show.  As fans of the show already know, Jim Krenn’s contract has not been renewed and he is no longer with them.  This is a horrible turn of events and everyone at Clear Channel should get some type of crotch shingles as punishment.  I listened to the show the other day and they had like THIRTY FIVE PEOPLE ON IT.  Apparently Bill Crawford is Krenn’s replacement, but they also had Gene Collier’s droning son and they also had Scott Paulsen.  Yes, Scott Paulsen is LENOing in on his old show now.  NO RANDY THIS IS NOT AWKWARD AT ALL EXCEPT THAT YOU ARE SITTING AT MY CHAIR AND USING MY FUCKING MICROPHONE AT THE FUCKING STATION THAT I BUILT.  By the way, I could definitely do without ever hearing Sally Wiggin on the show again.  What the fuck is wrong with her?

I’m still a huge fan of the other regulars—Randy Baumann, Val Porter and Mike Prisuta— who all still have great chemistry together.  I’m going to miss Krenn, though.  A lot.  He was the perfect co-host with Baumann.  His jokes, impressions and anecdotes about growing up in Pittsburgh were always entertaining.  He always could make me laugh.  It’s unfortunate that he is gone now.  A couple years ago, we had a similar scare when it appeared that Randy Baumann had left the show—but he was back in a couple months after resolving  his own contract dispute with those Clear Channel assholes.  Since Baumann’s return I never imagined that another contract dispute would cause Krenn his position at the station.  He is a Pittsburgh icon.

In 1999 when Scott Paulsen left the DVE morning show, I had some feeling of disappointment.  I was a big fan back then, too.  Paulsen’s departure was different, though.  He left on his own will—it didn’t feel like we were being robbed of a comedic talent like it does now with Krenn.  I hate listening to the DVE Morning show and feeling that something is missing. Even if Crawford ends up being a suitable replacement, I have a feeling that it still won’t seem right.

We’ll miss you in the mornings, Jimmy.  Good luck on the next chapter of your life.