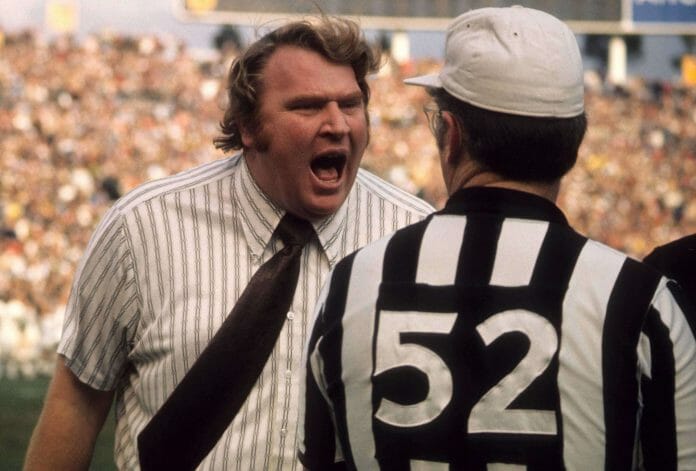 It always irks me when people say you shouldn’t speak ill of the dead. Waiting until someone is dead is the perfect time to speak ill of them. It will definitely never, ever get back to them. And it’s courteous to wait until they’re dead. I would never tell my mother-in-law to her face that I don’t give a shit how much she pays per pound for ham, but the minute she’s dead we will all have a good laugh about it. That way nobody gets hurt.

Anyway, for anyone younger than 30, the truth about John Madden is that he was the most obnoxious color commentator in sports. It’s okay to say that now because he’s dead. It’s very odd that many people made fun of how obnoxious he was (Frank Caliendo made a career of it) but a lot of people also seemed to insinuate he was the best at what he did. He was not. He was terrible. He bumbled and stuttered and yelled about nothing for three and a half hours every Sunday. It was awful to listen to.

If a Madden hologram started doing games again, I wouldn’t watch. Give me any other announcer besides Madden, any time. Unless people wanted to watch him ironically, to hear what stupid shit he would barf out of his face next, nobody that I know ever really wanted to watch him. We tolerated him because we had to. There was a time with no Redzone and no Sunday Ticket and you sometimes had only one late afternoon game to watch and you were stuck with Madden’s big, fat, stupid mouth. It was awful. Local Pittsburgh Sports Talk host Mark Madden once called John a “Fat Cartoon”. That’s the perfect description for how annoying he was.

However, John Madden was a great coach. One of the best ever, and a Superbowl champion. He coached for ten seasons and had a winning record in every one of them. A winning record– not the “non-losing season” bullshit that Mike Tomlin apologists love to brag about. And unlike Tomlin, Madden actually won playoff games throughout his career. He won playoff games in 7 of his 10 seasons, and finished with a 9-7 playoff record. Tomlin, in comparison, has only won playoff games in 4 of his 15 seasons (all with a HOF QB in Ben Roethlisberger) and has a playoff record of 8-8 (3-7 in his last 10). Tomlin fans also like to point out that Tomlin had the misfortune of coaching in the AFC during the Patriot’s dynasties– which is ludicrous because Tomlin only had to face Bill Belicheat’s Patriots in the playoffs once. (The Steelers were blown out, of course.) Madden had the Steelers formidable 70’s dynasty to deal with. He actually had to face them multiple times in the playoffs, going 2-3 against them– with some close losses incuding the Immaculate Reception.

Now that Madden is dead, I would hope he is remembered for how great of a coach he was and for that great rivalry with the Steelers, and for bringing a Superbowl to Oakland. Anybody who reveres him for his announcing is full of shit. RIP, Coach Madden.