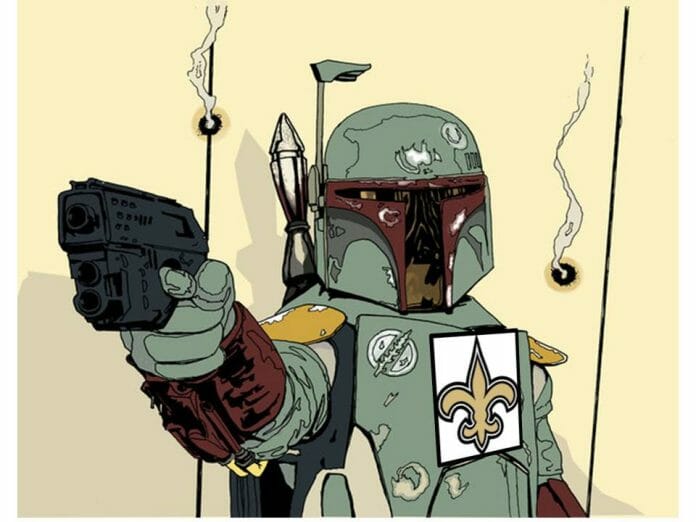 I always think of Boba Fett whenever I hear somebody talk about bounties because Boba Fett is awesome. Did you know he was a clone? Apparently that was part of the Episode 2 storyline but I must have been asleep because that movie was a big pile of horseshit. Fett is the best bounty hunter of all time. He collected on the bounty for none other than Han Solo and had to bargain with Darth Vader to do it. Even his back-story is pretty cool because he watched his father get beheaded by Jedi Samuel L. Jackson. Boba Fett was a badass. The New Orleans Saints defense—central figures in the current NFL bounty scandal—aren’t nearly as badass.

They did have a fortuitous Super Bowl season where they ranked 2nd in the league in turnovers and Tracy Porter intercepted Peyton Manning and returned it for a touchdown to seal the Championship; but for the most part, the Saints defense is soft. It has not been an intimidating unit since the early 90’s when they had that great group of linebackers—Rickey Jackson, Pat Swilling, Vaughn Johnson and Sam Mills. (They were so good that the NFL Network named it the top linebacking core ever.) The present day Saints defense is nowhere near as daunting. The one play that usually comes to mind with this group is Marshawn Lynch of the 7 – 9 Seattle Seahawks running through the entire defense for a touchdown in the 2010 wildcard playoffs. At the end of the play Lynch grabs his crotch as he dives into the endzone and was not fined because apparently grabbing your crotch is a perfectly fine touchdown celebration but accidentally falling is UNACCEPTABLE. (By the way, Tebow’s OT touchdown pass against the Steelers may have surpassed Lynch’s run as the absolute worst defensive letdown in NFL playoff history. Shit.)

When I first heard about Gregg Williams offering bounties for players, I didn’t think it was a big deal. I thought the only damage that the Saints defense could inflict on anyone would be on themselves as they get dehydrated chasing opponents in a 47 – 42 victory. It’s not like the Saints defense has ever really hurt anyone. They did bang up Favre pretty good in the Championship game in January 2010 but he wasn’t exactly at his peak then. Plus they still let up 28 points. I also figured that bounties would probably hurt a team more than anything. If a player is focusing more on hurting the opposing quarterback rather than playing within the defensive scheme wouldn’t he be more apt to blitz when he shouldn’t? Or draw a stupid personal foul penalty? Plus paying players “under the table” is a clear violation of the salary cap and the NFL does not take salary cap violations lightly. (The Steelers lost a third round pick in the 2001 draft after they turned themselves in for a minor salary cap violation that was basically an accounting error.) Knowing all of this why would any coach put bounties on players? Gregg Williams is an awful coach, though, so I guess he’s as good a candidate as any to do something so stupid.

Mike Florio on ProFootballTalk.com actually wrote that this scandal taints the Saint’s Super Bowl victory which I think is ridiculous. Players try to hurt each other on the field all of the time whether or not their coaches put them up to it. Big hits are part of the game (for now). Had they succeeded in injuring Favre or Manning with a cheap shot then that would have already tainted their win—but they didn’t so I don’t see how the bounties gave them any unfair advantage on the field. What makes this scandal HUGE right now, however, is the emphasis that Roger Goodell has been placing on player safety and the lawsuits that former players have recently filed against the NFL. For a coordinator to admit to not only having encouraged players to injure opponents but to actually pay them to do so is putting a HUGE DAMPER on Goodell’s anti-violence campaign. Investigations have also revealed that Sean Payton may have known about all of this—which makes me extremely happy because despite being such a weenie little guy Sean Payton comes across as a huge dick. I’m not sure what it is about the guy, but he just rubs me the wrong way. His only playing experience was as a scab quarterback during the 1987 strike—and that’s kind of a dick move. (Mike Webster also crossed the picket line that year but based on what we know about Webster’s brain injuries he probably had no idea that they were on strike.) I really hope Payton gets suspended and he should—he was the head coach. And he’s a dick.

My guess is that Payton and Williams will both see multigame suspensions, there will also be huge fines levied against the Saints and they will lose at least a first round draft pick. This is going to get really interesting. Saints owner Tom Benson likes to prance around with an umbrella on the field after games. I hope Goodell takes that into account and quadruples their punishment. They may lose an entire draft—Ditka style.