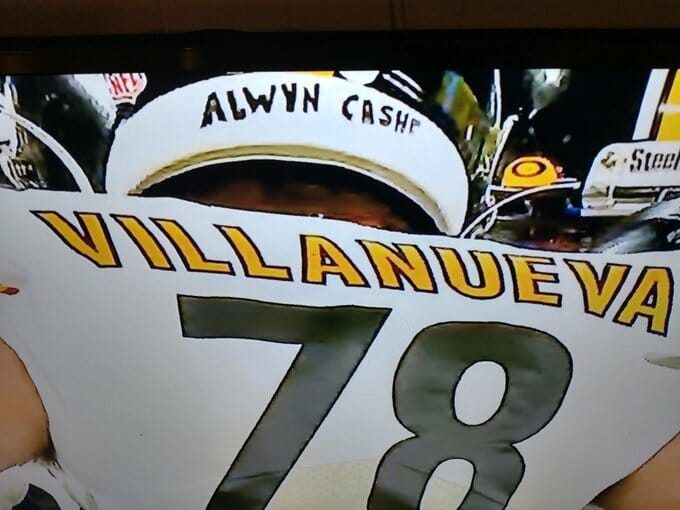 Whose name was on Alejandro Villanueva’s helmet?

During last night’s Monday Night Football matchup between the Pittsburgh Steelers and the New York Giants, Steelers tackle Alejandro Villanueva decided to break from the team, covering up the name of Antwon Rose Jr. on his helmet with the name of Alywn Cashe, a fallen soldier who gave his life to save six others during the Iraq War.

This year the NFL is allowing players to wear helmet decals to honor victims of systemic racism. Players could select the name of an individual to wear on their helmet and the Steelers players and coaches united as one to wear a single name on the back of their helmets and hats for the entire 2020 season – Antwon Rose Jr.

However, Villanueva veered off course and decided to take a different approach choosing to honor another African American instead.

Villanueva was a captain in the United States Army where he served as an Army Ranger and was also decorated with a Bronze Star for valor. He played college football for the Army Black Knights, being recruited at one position but playing three others during the course of his career, including tackle, tight end, and defensive end. Villanueva, who began his NFL career in 2014, served three tours of duty in Afghanistan.

You can clearly see the name Alwyn Cashe written on Villanueva’s helmet as the Steelers played the Giants on Monday Night Football.

Steelers head coach Mike Tomlin says that Villanueva did approach him before the game yesterday about honoring the military hero on his helmet… and he was fully supportive.

Who is Alwyn Cashe?

Why did Alejandro Villanueva wear Alywn Cashe’s name on his helmet?

According to the Military Times, Cashe, a Sgt. 1st Class, was killed on November 8, 2005 while serving in the Army during Operation Iraqi Freedom. He was of Company A, 1st Battalion, 15th Infantry Regiment, 3rd Infantry Division. He joined the Army after graduating Oviedo High in 1988 and fought in the first Gulf War before later serving in Iraq following the 2003 invasion.

It shouldn’t come as a surprise to anyone that Villanueva chose to honor a military hero. Villanueva hasn’t chosen to publicly state the exact reasons for breaking from the team. It’s unclear if he plans to do it again in Week 2 or choose a different military hero to honor.

Cashe was posthumously awarded the Silver Star, making him the first African American to receive the award for actions in the most recent wars. The Silver Star Medal is the Armed Forces’ third-highest personal decoration for valor in combat. It’s awarded primarily to members of the United States Armed Forces for gallantry in action against an enemy of the United States.

Cashe — who was married with a 12-year-old daughter — was posthumously awarded the Silver Star for valor in combat for his repeated rescue attempts, which resulted in second and third-degree burns over nearly 75 percent of his body. Witnesses said that even as the heat burned his uniform and body armor off of him, Cashe continued to ignore the pain to pull his men out of the fire.

By the time he was done, but he got seven men out. Cashe would later die from his burns. Until his final breath, he was asking about his men.

He was only 35 at the time of his death.

A Great Hero of the Iraq War

According to the Washington Post, he has long been seen within the military community as one of the great heroes of the Iraq War, and he was recommended this year as a potential new eponym for one of 10 Army installations that are named after Confederate military officers who fought to preserve slavery.

At the time of the Silver Star award, Army officials said that even though the vehicle was set ablaze by a roadside bomb, Cashe’s actions did not merit the Medal of Honor because the soldiers were not in active combat. However, Cashe’s actions “merit award of the Medal of Honor,” Defense Secretary Mark T. Esper said last month in a letter to members of Congress who have taken up his case.

Major General Gary Brito, Cashe’s battalion commander at the time of the action, did not initially realize the extent of Cashe’s injuries and the pain he must have been in when he nominated Cashe for the Silver Star award. Witnesses were evacuated for medical treatment and unavailable for statement. Brito subsequently submitted additional statements to the Army to justify upgrading Cashe’s award to the Medal of Honor. Brito continues to support efforts to upgrade Cashe’s Silver Star to the Medal of Honor.

Awarding Cashe the Medal of Honor

Despite these heroics, many people have been advocating that Cashe’s Silver Star be upgraded to a Medal of Honor. On October 17, 2019, the 14th anniversary of Cashe’s actions, three members of Congress wrote to Esper and Army Secretary Ryan McCarthy formally requesting an upgrade of Cashe’s award to the Medal of Honor.

A total of 261 were awarded for actions during the Vietnam War and 145 for actions in the Korean War. About 3,500 of the medals have been awarded since the honor was started during the American Civil War.