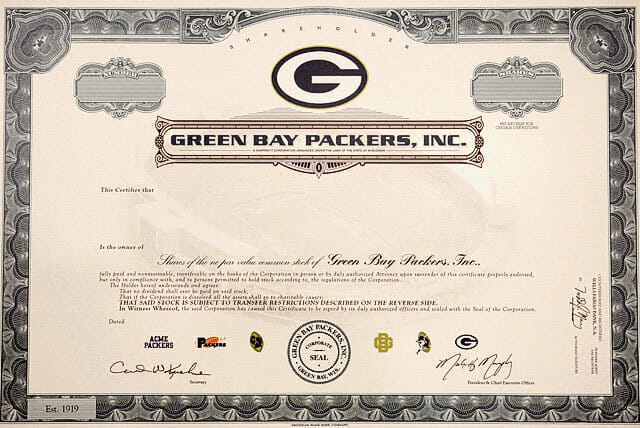 Congratulations Packers fans.  Wearing hunks of cheese on your heads don’t make you look ridiculous enough?  You had to go and donate 22 Million dollars to the Packers to make stadium renovations?  Yes, I said “DONATE”.  That piece of paper that you paid $250 for isn’t worth shit.  It is fake stock.  Do you know how many awesome things you could have bought with that $250?  You just gave the Packers money and they will give you absolutely nothing in return.  DIDN’T MADOFF GO TO PRISON FOR THE SAME THING?  And for those of you thinking “it’s no biggie– we can afford it”.  Well, you could have given that money to…I don’t know…SICK KIDS?

You think you’re a team owner.  REALLY?  Let’s see you trade Donald Driver tomorrow. Go for it.  He’s old.  You guys are set at wide receiver.  Why don’t you go get yourself a 5th round pick?  …What’s that?  None of the other teams will take your calls?  I thought you were an owner, FUCKFACE?  Take that piece of paper and shove it up your ass.  I don’t hate the Packers.  Really, I don’t.  I think it’s great that the little kid from “Up” grew up and got the Packers coaching job.  He’s from Pittsburgh, you know.  I do hate stupid people, though, and it doesn’t get any stupider than donating money to a corporation that makes tens of millions of dollars every year.  That might be the stupidest thing ever.  I can’t wait to see you lose in the playoffs…on your home field…in a cold windy game that makes it impossible to throw the ball.  BECAUSE YOUR DEFENSE SUCKS ASS.

Hey, guess what?  I just printed out a copy of your “stock” that I found on the Internet for free.  NOW I OWN THE FUCKING PACKERS TOO.  First order of business….MOVE THE TEAM.