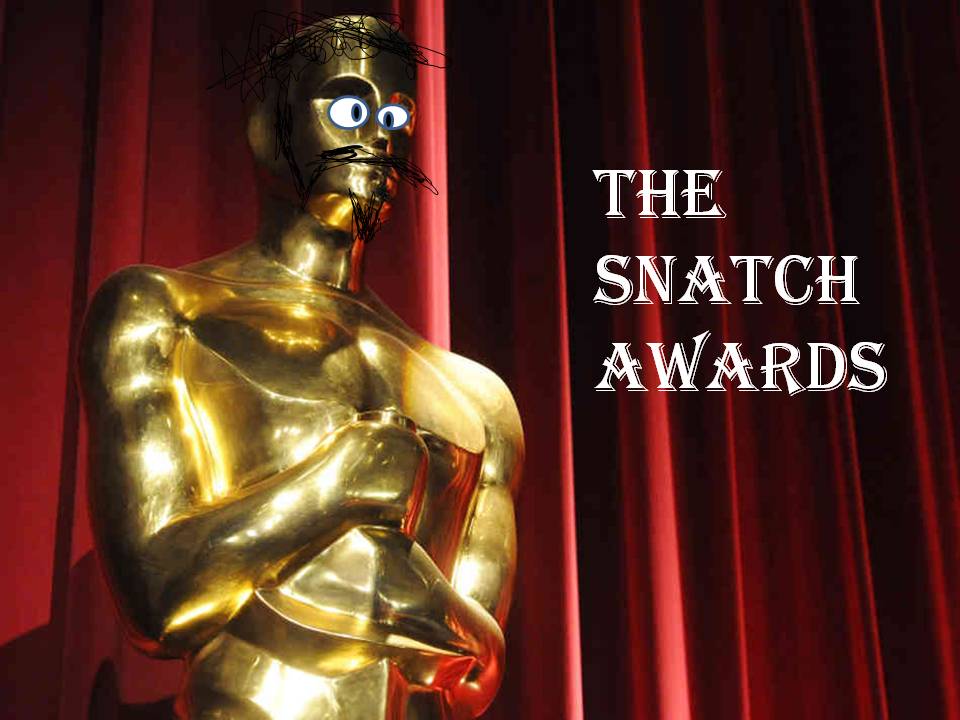 Now that this year’s Oscar nominees have been released, we’ve decided it’s about time that someone comes out with real movie awards for real people. More specifically—real people with young kids who can’t get out much, like me. If you have kids, then you know that getting to the movies for non-Pixar films is nearly impossible. I didn’t see “Argo”. I didn’t see “Django Unchained” or “Lincoln” or “Zero Dark Thirty”; and I probably won’t see those movies for years. I do watch a shitload of Netflix streaming movies from my couch when we finally get the kids to bed, though. The Netflix streaming movie catalog sucks ass; but every so often you come across some real gems. Those are the ones we’re here to celebrate. So change a diaper, shoot some scag and then sit back and read the first annual SmorgasBurgh’s Netflix Awards for Those with Children at Home. The SNATCHes!

I don’t read “Entertainment Weekly” anymore (my forty year subscription finally ran out), but fuck those pretentious pricks for always putting movies in their Top 10 list that HAVEN’T EVEN BEEN RELEASED YET. They always act like they’re so much better than us because they get to watch movies that we haven’t even heard of. “This movie is way more awesome than anything you’ve seen. You can’t disagree with me either because you can’t even see it yet. Too bad you aren’t special like me.” FUCK YOU. Well, you’re probably not familiar with all the movies in this list either, unless you scrape the bottom of the Netflix movie barrel like I do. But you CAN turn to Netflix IMMEDIATELY after reading this and enjoy every single one of these masterpieces.

The only rules to be eligible for a SNATCH are:

Without further ado, the nominees for the 2012 SNATCHes are:

Jeff, Who Lives at Home

I’m a big fan of Jason Segel and in this offbeat comedy he plays a pothead slacker that tries to figure out his place in the world. It doesn’t have a lot of big laughs, but it’s very entertaining…AND SHORT. It’s only about 80 minutes long which is a big deal when you’re tired from a long day of work and running the kids to soccer practice and you can barely stay awake to watch a full two hour movie. It’s directed by the Duplass brothers who must own Netflix because all of their movies are on it.

This movie is nominated because it features two young women who share a hotel room in Rome and get naked for pretty much the entire time. WHOLE LOTTA ASS. Unfortunately, they do more talking than anything else. (Leave it to chicks to get naked and then just talk the whole time.) To be honest, I didn’t even watch the whole thing— I fast-forwarded through a lot of the talking—but I watched enough to know that this is true ART and worthy of a nomination. I think there were subtitles, but I can’t even remember. THE PLOT IS NOT IMPORTANT HERE. There is a bit of humor at one point when a man knocks on the door, sees what’s going down and is like “how about we turn this two-some into a three-some!” But the girls are all like “No dicks allowed!” And I was all like “GET THE FUCK OUT, ASSHOLE, THEY WERE FINALLY ABOUT TO SHUT UP AND GET BUSY.” Did I mention there is a lot of ass?

There are a lot of terrible zombie movies (like the last few George Romero films)—but fortunately this one is pretty good. This is a German film with subtitles (SO CLASSY), but it doesn’t matter all that much because there isn’t a lot of dialogue, just a lot of tense action. The story focuses on a few survivors stranded in an apartment complex surrounded by zombies. Also, this movie is even shorter than “Jeff, Who Lives At Home” at only sixty minutes. You heard right—ONE HOUR—about the length of an episode of “Matlock”. I’m not even sure it qualifies as a movie—but it gets the SNATCH nomination nonetheless. If you like foreign zombie movies, be sure to also catch “Dead Snow” which features zombie Nazis who terrorize vacationers at a remote ski cabin. It’s a real movie— not making this shit up.

This drama stars Michelle Williams as a conflicted young wife who is tempted to cheat on her husband. I have to admit that the first half moves very slowly, but it is so beautifully directed that it is well worth watching. Sarah Polley, the blond actress from “Go” and the “Dawn of the Dead” 2004 remake (both excellent movies) is the talented, young director. Williams is naked a lot in this movie, which doesn’t hurt if you’re trying to get nominated for a SNATCH. Come to think of it, though, Williams is naked in a lot of movies. (I’m guessing that she feels guilty for not putting out enough when she lived with Heath Ledger so now she’s overcompensating by fucking EVERYBODY.) Seth Rogan plays her husband, but it’s not Funny Seth Rogan, it’s SERIOUS Seth Rogan. I’ve never seen SERIOUS Seth Rogan before, so this was new to me. I like the funny one better. Luke Kirby plays the douchebag who tries to steal Williams from Rogan. SHE’S MARRIED, ASSHOLE! I’m betting that playing a douchebag was not a stretch for him. Sarah Silverman also gets drunk and naked in this movie—but not in that order.

This movie gets nominated for the title alone. It’s actually very terrible, but the title and the premise are gold. Like a fucking Scooby Doo episode. I could just hear the pitch, “Think about it, Abram. What’s even SCARIER than a one-headed shark? (pause) A two-headed shark! You’re damn right! A SHARK WITH TWO FUCKING HEADS! That’s twice as scary as that shark in ‘Jaws’!” The plot follows a bunch of idiot college students who get stranded on an island after the two-headed shark attacks their boat. The shark proceeds to kill most of them. THAT’S RIGHT—these college students are so fucking stupid that they manage to get killed by a shark while ON LAND. The plot is awful. The acting is awful. The special effects are awful. Everything about this movie is awful, but how could you not watch a movie called “2-Headed Shark Attack”? COUNT ME IN. The really sad part, though, is that Netflix recommended this movie to me, suggesting that I would “really like it.” YOU LIKE STUPID SHIT—WATCH THIS! Netflix probably thinks I’m a thirteen year old German boy.

And the SNATCH goes to………

ALL OF THEM. It’s a 5-way tie! Suck it, Oscar! These movies actually are worth watching—so enjoy them if you have the time and Netflix. Actually, “2-Headed Shark Attack” is NOT worth it, but I am sure that you’ve already been sucked in. WHO CAN RESIST?

All these movies are probably also available on VHS.