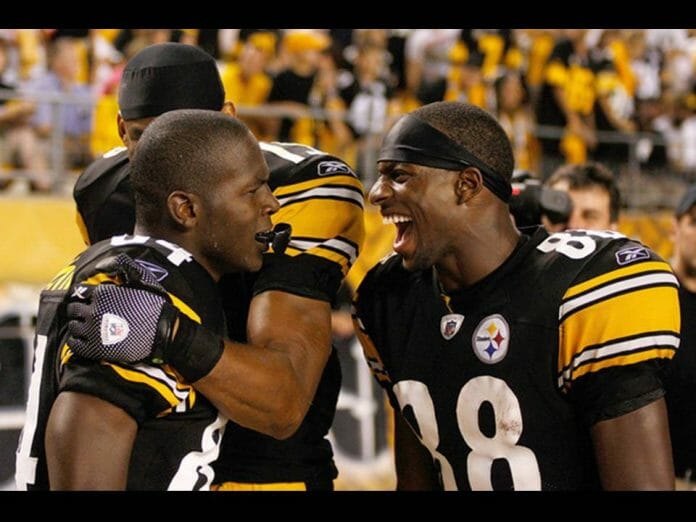 The Steelers already lost starting Wide Receiver Mike Wallace when the Miami Dolphins overpaid him at an average of $12M per year. (He’s set to earn about $40M of his new contract in the next three years. That’s Flacco money!) Letting Wallace go at that price was the right move. The Steelers didn’t have room under the salary cap to pay him anywhere near that. With Wallace gone, the Steelers are left with only Antonio Brown, Plaxico Burress and Jerricho Cotchery as NFL caliber receivers on their roster.

Emmanuel Sanders is a restricted free agent and is currently being courted by the New England Patriots. He would likely be the starter opposite Antonio Brown if he returned to the Steelers. If he left, the Steelers would receive a late 3rd round pick as compensation and a gaping hole in their roster where two of their best receivers from last year had been. Also, don’t forget that the great Heath Miller, Steelers veteran TE, is recovering from a serious knee injury and may not be available for the start of the season. As much as some Steeler fans like to think the Steelers need to stick with smash-mouth football anyway and run the ball 60% of the time—that recipe for offense just does not work in the NFL anymore. Even the Ravens took to the air to win the Super Bowl last season. (It still doesn’t seem real that the Ravens won the Super Bowl last season. I fully expected the earth to open up and swallow us all into its fiery core immediately after the game ended. Instead we are all left to suffer through these dark times.)

Anyone thinking the Steelers can draft a wide receiver in the first round to step in and contribute right away is overly optimistic. Even the best young receivers need a couple years in the NFL to learn the game. The draft is not the answer to fill the Steelers’ immediate needs if Sanders does depart. So who is left out there in unrestricted free agency to fill the hole? The options are limited.

Steve Breaston – The Steelers already brought this Pittsburgh native in for a visit, but it seems that injury will keep him off any NFL roster this season.

Brandon Lloyd – Not a good sign if the Patriots let him go in order to make room for Sanders. I’ve always been enamored with Lloyd’s abilities to make acrobatic catches, but the fact that he’s bounced around from team to team over the years leads me to believe that this guy has too many question marks.

Josh Cribbs – Cribbs has never been much of a receiver with the Cleveland Browns, but he is a speedy, versatile player who is also a dangerous returner. I’d prefer someone who played more of a role at receiver, though.

Darrius Heyward-Bey – This former first rounder has underperformed with the Raiders. (He was a reach in the first round.) He does have excellent speed, but I prefer someone with better hands.

Kevin Walter – This guy has put up solid numbers with the Texans—although he was opposite one of the best in the game in Andre Johnson. If we needed a slot guy, he would be my choice—but he’s 31 now and I just don’t see him as a viable replacement for Sanders.

Early Doucet – After a breakout season in 2011, he had a terrible 2012, but the Cardinals had Quarterback issues all season. The knock on him is that he drops too many passes, though. Otherwise he would be my number one choice to sign and can probably be had for the veteran minimum.

Laurent Robinson – He’s only 27 years old and he has great size at 6’2”. He had a great year in Dallas before signing a huge contract with the Jacksonville Jaguars. Problem is that he underperformed in Jacksonville and was recently cut with his character being called into question. Not good.

Domenik Hixon – He has spent the last 5 seasons behind much better receivers on the New York Giants’ depth chart. He is 6’2” and only 28 years old, but he’s never caught more than two touchdowns in a season and is known more for his skills as a kick returner than a receiver. He has already turned down a contract offer with the Lions, so it is possible he is looking for more money than the Steelers will be willing to spend.

David Nelson – He’s tall (6’5”) and young and comes from a big program in Florida, but he had very unimpressive numbers with the Buffalo Bills in his first three seasons and is coming off a serious knee injury.

A couple more negatives that all ten of these guys have when compared with Sanders is that none of them have built up a rapport with Ben Roethlisberger and none of them have a year under their belt in Todd Haley’s offensive system. (Early Doucet played for him for a year with the Cardinals, but that was a long time ago.) The Steelers are much better off keeping Sanders rather than taking a chance on any of these free agents. They have not brought any receivers other than Breaston in for a visit, so they are probably thinking along the same vein. If the Patriots do end up offering Sanders a contract, the Steelers would be wise to match it.

Losing Mike Wallace and breaking up the “Young Money” threesome may actually yield some positives for the team. Antonio Brown and Emmanuel Sanders have both had costly drops and fumbles last season. Wallace’s contract dispute with the Steelers was likely a distraction, especially among the young wide receivers. Cotchery and Burress may be better role models for those younger guys to keep them in line and keep their heads in the game. And with Wallace gone, the incentive of being a starter and earning a long term contract, may be enough for Sanders to step up his game. The Steelers may be able to move on without Wallace (and spend that money elsewhere), but they can’t afford to lose both him and Sanders. At the very least, keeping Sanders gives the Steelers some stability at the receiver position for at least another year, while anyone they draft learns the ropes. They may be able to lose him a year from now— but they cannot afford to lose him now.