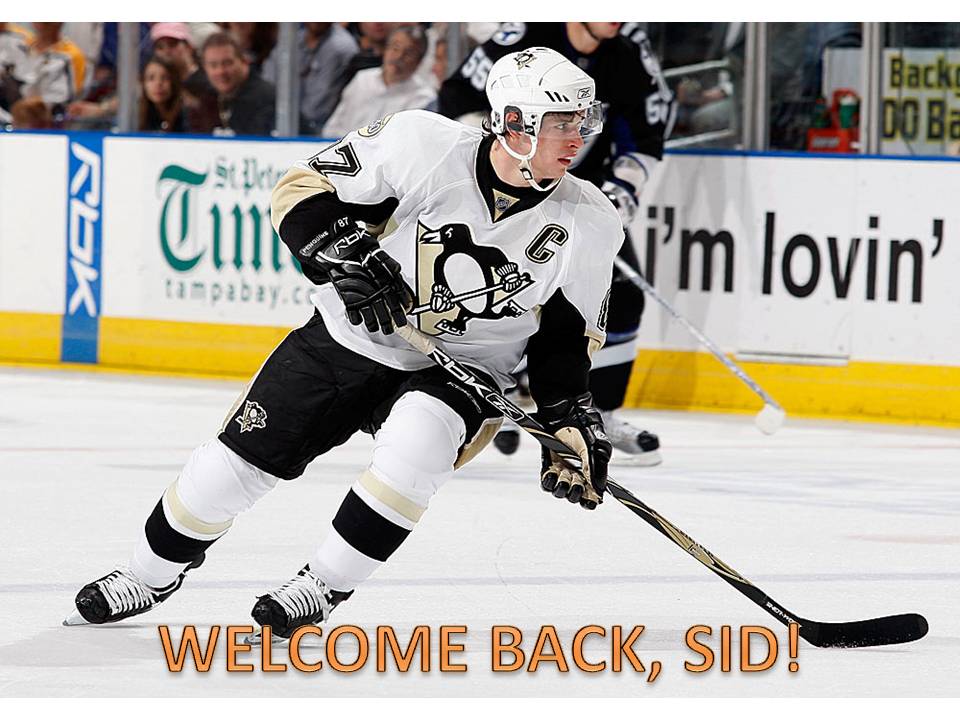 – The Penguins still made the playoffs without you!  But their power play sucked ass and they lost to the Lighting in the first round after taking a 3 – 1 series lead.  Your job is safe.

– The Steelers made it to Superbowl 45!  That’s right, Sid, the Steelers made their 8th trip to the big game.  It was a hard fought game and the Steelers had the ball late down by 6 with a chance to put together another memorable SB winning drive.  Unfortunately their offense GOT RETARDED and put forth the lamest performance ever in that situation. Hats off to them anyway for another fantastic season.

– James Harrison called Roger Goodell a fag!  In a major publication nonetheless!  And he didn’t even say it in a round-about way like, “Roger needs to pry his face off of Robert Kraft’s cock.”  He just came out and said “Goodell is a fag.”  Much cooler.

– Pitt got two new Football coaches!  The first one, Mike Haywood, celebrated his hiring by beating the shit out of his girlfriend.  Pitt frowned upon it, though, and fired him almost immediately.  (One can only imagine how bad he beat her after getting fired.)  So then they hired Todd Graham.  They don’t have to worry about him beating his woman because HE CAN’T BEAT ANYBODY!  HA HA HA HA HA!

– The Pirates were in first place!  Insane, right?  Well, that was a bit misleading of me because they were actually only in first place for like 3 seconds.  Then they reverted back to sucking.  And sucking big time– to the tune of 90 losses.  It was funny, however, listening to all of those irrational, overly-optimistic Pirates fans who thought that THIS WOULD FINALLY BE THE YEAR.  It wasn’t.  Like battered wives, however, they will be back to support the club with unrealistic expectations again next year.  Their new coach, Clint Hurdle, repeatedly tried to hang himself in the clubhouse throughout the last months of the season.  (That’s the only explanation I could come up with for how his face got redder and more bloated as the agonizing season wore on.) – Joe Paterno announced that he will be retiring at the end of the season!   I know, not such a big deal, right?  Because he is like 90 and shits himself on the sidelines.  But it gets stranger.  Within hours of making this announcement HE WAS FIRED!  Why was he fired, you ask?  You ask good questions, Sid.  He was fired because his longtime assistant Jerry Sandusky was ass-raping little boys for years in the locker room showers and Paterno knew about it but just swept it under the rug.  SID, I HOPE THAT DIDN’T JUST GIVE YOU A STROKE.  Sandusky would also turn all the shower heads on and let the little kids slide across the floor like the fucking grossest slip-n-slide ever.  If I was one of those parents, I would almost be as pissed about that as I would be about the ass-raping.  I mean, if Paterno let Sandusky rape little boys in those showers, who knows what other freaky shit was going down in there!  I wouldn’t want to set foot in there let alone slide across the floor naked.  After showering in there, I would immediately NEED A SHOWER. Sandusky is a sick fuck.  And Paterno is a worthless piece of shit.

Well, Sid.  I think you’re all caught up.  And we’ll all be glad to see you on the ice again. However, I think I speak for all Pens fans when I say that you should probably have waited until February.  WE NEED YOU HEALTHY FOR THE PLAYOFFS..