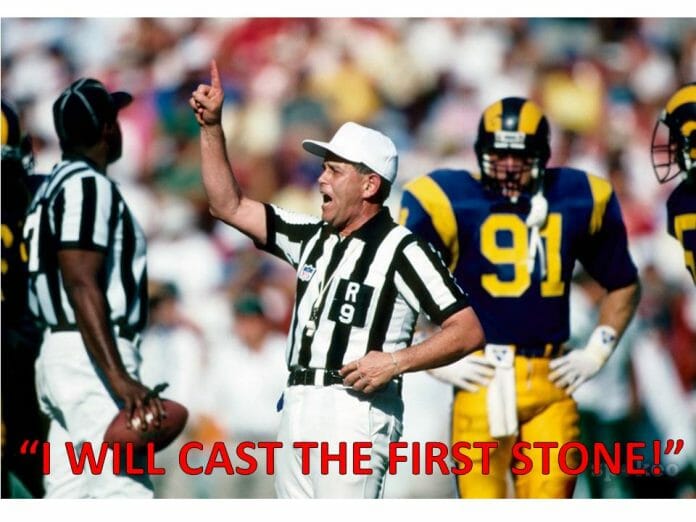 Former NFL Referee Jerry Markbreit was a guest on The Dan Patrick Show this morning and defended the locked-out NFL officials with the most insane comments on this topic to date. He revealed that the average salary for NFL Officials last season was ONLY $149,000 per year, far less than their counterparts in the MLB and NBA. (He failed to mention that those leagues have far more games.) Then he had the gall to compare the hours that officials work with that of the players, who “make millions of dollars”. He actually complained that the officials sometimes have to work 20 – 30 hours per week!

So the average NFL official isn’t satisfied with $149,000 and full benefits and a pension for a job that requires 20 – 30 hours per week for about 6 months out of the year?

$149,000 isn’t a ridiculous amount of money– but it is certainly far more than the average NFL fan makes. It is also very fair compensation for the minimal amount of hours that the average NFL official works. It disgusts me that Markbreit would whine about money and hours when NFL officials are far better off than most of the general public in both categories.

Markbreit said that it “breaks his heart” how the regular officials are being treated and then ripped the performance of the replacement refs, who he referred to as “scabs” and then went on to say “shame on them” and “this is going to hurt their careers”. Typical strong-arm union bullshit. The kicker for me, though, was when Markbreit admitted that it took him “a whole lifetime to become a pseudo expert on the rules” but The Dan Patrick Show pointed out that he was promoted to Head Referee in just his second year. So, what are you saying, Jerry? You were working games as a Head Referee and really didn’t know all the rules? But you’re bitching about the replacement refs without whom THERE WOULD BE NO FOOTBALL RIGHT NOW?

In previous interviews, Markbreit had called the replacements “amateurs” and said that they “were only going to get worse.” Interestingly, when Markbreit was the official for Super Bowl 17, he didn’t know which side of the coin was heads versus tails and was confused during the opening toss, incorrectly telling Washington Redskins Quarterback Joe Theismann that he had won. He had to be corrected and overturned by Los Angeles Rams great Elroy Hirsch, who was on hand as the ceremonial coin tosser. I THOUGHT YOU REGULAR OFFICIALS WERE FUCKING PERFECT, JERRY? And as we in Pittsburgh very well know– that is not the only time a “regular” official screwed up a coin toss.

I applaud Dan Patrick for justifiably criticizing Markbreit’s comments. He said that Markbreit likely damaged the fans perception of the union and then correctly pointed out that the refs are replaceable. Then one of his “Danettes” (as his staff is referred to), suggested that if Markbreit wanted to help the locked out officials he should stop doing interviews. I have no compassion for the Officials Union and hope they all lose their jobs. At the very minimum, if they do return, they should be heavily scrutinized and singled out and held accountable for every mistake. In the meantime, I am happy to be watching NFL football without the PERFECT overpaid regular referees.