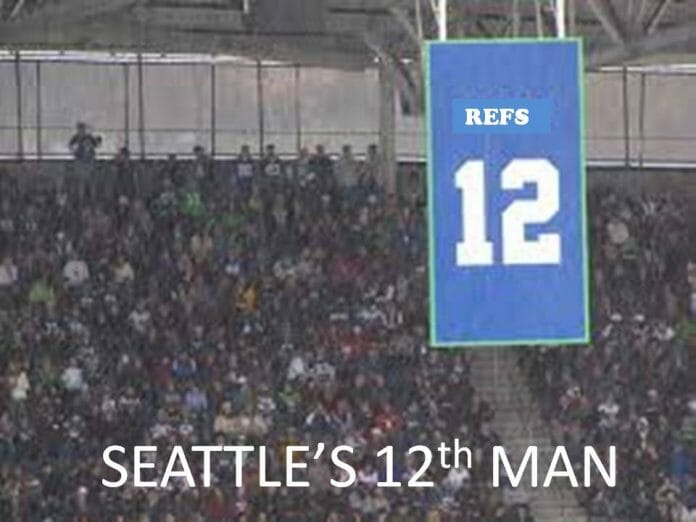 A modicum of our nation’s spirit died with the NFL fiasco on Monday night.

JUST KIDDING! LOL. PACKERS GOT SCREWED AND I LAUGHED MY ASS OFF. Did you hear Aaron Rodgers complaining that they gave him a kicking ball to throw on the 2 point conversion? That’s even funnier than the Hail Mary. He was pretty pissed about it. I’m assuming a kicking ball is shaped like a dead fish? Right? Because if a kicking ball is shaped anything like a regular football, then I’m sure a professional QB wouldn’t have any problems throwing it. But Rodgers cried about it for hours. Maybe they handed him the kicking ball by shoving it up his ass? I’D BE SO PISSED. I’d be all like “Hey, dude, what the hell? How about just tossing it to me next time? Now I have to fish it out of my…oh, wait…What the fuck? It’s a kicking ball! Moron!” The replacement refs working the next Packers game should just fill a ball with cheese-whiz to fuck with him. Or draw laces on a balloon. “Here you go, fuckface!”

I’ve always maintained through this lockout that the “regular” officials were never very good to begin with. People are acting like they’ve never blown a call that impacted the outcome of a game before. It happens every year. Regardless of the officiating, I am not going to stop watching (this past weekend was one of the most exciting weekends of NFL football I have ever seen). Anyone who has inexplicably decided not to watch because of the replacements is really missing out.

Of course the controversial play on MNF shouldn’t have been ruled a touchdown. Even if the officials thought both players had possession (they didn’t), they had missed a blatant offensive pass interference call. The bigger problem in my mind is that the play was reviewed with the Replay Official, Howard Slavin (WHO IS NOT A REPLACEMENT) and the NFL officiating supervisor, Phil Luckett (ALSO NOT A REPLACEMENT). YES THE SAME JEROME BETTIS/COIN TOSS PHIL LUCKETT. WHY THE FUCK DOES HE STILL WORK FOR THE NFL? Both of these league officials should have advised the official on the field to overturn the touchdown. They didn’t. They fucked up.

There was confusion on ESPN about whether or not the call could even be reversed by Instant Replay. Everyone on the air (including their “expert” retired official) told us it couldn’t. THEY WERE WRONG. Andrew Siciliano and his radar and everyone else on NFL Network also told us that it couldn’t. THEY WERE WRONG. Former players, coaches, media members and a former official. ALL WRONG.

NOBODY KNOWS THE FUCKING RULES ANYMORE.

The play could have and should have been reversed by Howard Slavin and Phil Luckett but it wasn’t. AGAIN, WHY IS PHIL LUCKETT STILL HANGING AROUND TO FUCK SHIT UP?

There is way too much confusion in the NFL these days regarding rules. The rulebook has evolved into a complicated mess. Bringing back the locked-out officials isn’t going to fix everything. By the way, Greg Matzek of Newsradio 620 in Milwaukee said that having replacement refs is like having a first year med student performing open-heart surgery. I just said NFL rules are confusing, but comparing it to heart surgery is the dumbest fucking thing I ever heard. I hope Matzek needs open-heart surgery one day and just before he goes under Ed Hochuli strolls in with a scapel like “Let’s do this, bro!” Then replaces his heart with a kicking ball.

Here are my suggestions to rule changes to make everyone happy:

1. Simplify catches. Possession of the ball and two feet down should be a catch. That’s it. No “football move”. No maintaining possession after going to the ground.

2. Blocking below the waist should be illegal. If player safety is as big a concern as the league tries to convey, then why do they still let offensive players dive at defenders’ knees? They don’t allow it on hits to the Quarterback. Remember? They changed it a few years ago because they didn’t want Thomas Edward Patrick Brady, Jr standing on the sidelines holding Gisele’s purse. The offense has been having rules changed in their favor for years– at least give the defense this one.

3. When a play is reviewed, allow any aspect of that play to be reviewed. It doesn’t have to be so complicated. If you’re wasting time looking at a play, at least try to get it right and if there isn’t enough video evidence to overturn it, than just tell us. I knew that field goals could be reviewed, but did not know that the rules regarding which parts of the kick can and can’t be reviewed are insane. As much as I enjoyed watching Belicheat having an aneurysm after that close Field Goal on Sunday night, I wanted the Ravens to lose. It’s ridiculous that the Field Goal couldn’t be reviewed because of some technicality.

4. Get rid of the Tuck Rule. After all the furor over this stupid rule, nothing has changed. If the quarterback’s arm is going forward when the ball leaves his hand, it is a pass. If not, it is a fumble. Simple.

5. Let the players celebrate a touchdown. The officials have a million things to worry about and yet there are a bunch of different rules about how players can dance in the endzone? Just let them do what they want and if they make an ass of themselves we’ll let Bob Costas scold them.

That’s it. Five simple rule changes and we can stop the rioting. You’re all welcome.