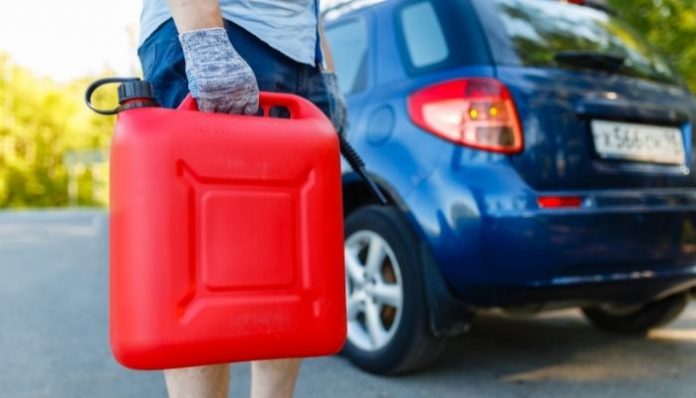 Venturing beyond where the roads end is certainly a thrill, but going where there are no gas stations can put an off-road driver ill at ease. That means no beef jerky, no expert directions, and most of all, it means no gasoline. To prepare for an off-road expedition, you should probably have a backup reservoir of fuel just in case your tank should run empty. But filling up that familiar plastic red can isn’t as simple as loading it up and tossing it in the trunk. Before your next trip, remember these precautions for carrying gas cans.

A recent gas shortage in America sent everyday motorists into a panic. Wall-to-wall coverage of the bank run on fuel featured civilians who didn’t know the first thing about safely storing gasoline. Some drivers, believe it or not, filled black plastic garbage bags with gasoline and stuffed them in their trunks as if they were groceries. You don’t need an advanced degree in organic chemistry to figure out why this is bound for disaster. You know better than this, of course, but it has come to our attention that some off-roaders still try to get creative with their gas containers, fashioning disused milk jugs, two-liter soda bottles, or other large containers into ad-hoc gas cans. Gasoline can melt untreated plastics that aren’t meant for containing it. Use only UL-approved plastic gas cans or metal “Jerry cans” to carry gasoline.

Don’t Fill To the Brim

Remember when you were a kid, and your family had to make a pit stop at the gas station? Topping off the gas tank seemed like one of those magical arts of being a dad—intuitively knowing when enough was enough. In reality, increasingly sophisticated cars and gas pumps make sure that pumps don’t overfill tanks. When it’s just you and that UL-approved gas can, topping off is a much more inexact science. In fact, filling a can to capacity is the last thing you want to do. Gasoline expands, and allowing it no room to do so can cause a can to burst. Instead, merely fill your can to no more than 95 percent, which can give you up to five gallons in a pinch. Most gas cans feature a safety line; observe it.

Any list of precautions for carrying gas cans should clarify where they should go. When you’re off-roading, it’s especially important to not only remember to bring your gas can but also to keep it safe and secure. You don’t want a can and its fumes sharing space with you or your passengers. Instead, securely mount it to your spare tire or rear bumper, so it’s there if you need it and out of harm’s way. Consider the weight you’ll be adding to your vehicle: five gallons of gasoline and its container add almost 32 pounds to your vehicle, which is enough to make you think about ideal placement. A spare tire mount may center that extra weight as best as it can.