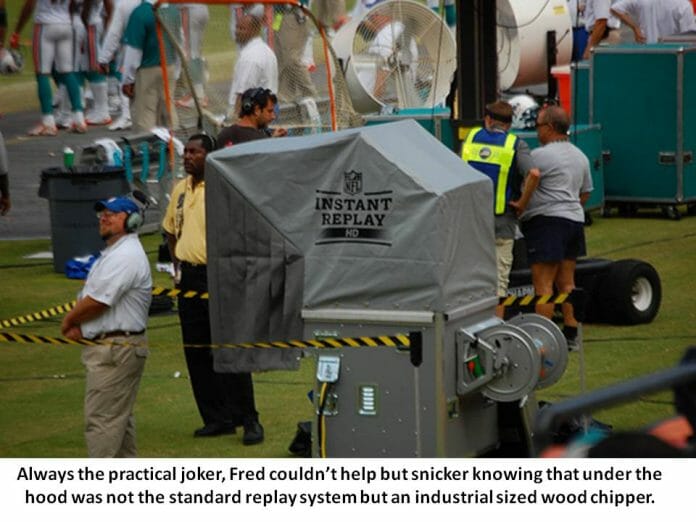 Someone in the NFL finally realized that their Instant Replay Review process was sorely in need of an overhaul. Not which plays are reviewed and why– but HOW the plays are reviewed. Someone FINALLY decided that the whole charade of a referee walking all the way across the field to a peep show booth on the sideline, putting on the Pauly D headphones and eating a sandwich under a tarp while reviewing a play was the MOST INEFFICIENT PROCESS IN THE WORLD. And this all starts AFTER said referee walked all the way to midfield just to announce to everyone that the play is going to be reviewed and that now would be a good time to pop in a Rosetta Stone DVD if you’re watching at home. Now that someone realized the error of their ways– it will be a slam dunk to revamp the process, right?

Even though it makes all the sense in the world to copy the NHL or the College Football systems and let an official in a room with a giant IMAX TV make the call in like 30 seconds, the NFL owners decided that their ridiculously slow and painful process is better. At the owners’ meetings this week they voted against changing it. Then they all snorted coke off naked cheerleaders and lit cigars with hundred dollar bills. (By far the best part of owning an NFL team.)

The Buffalo Bills were the team that proposed the change. They wanted all the reviews done by an official in a booth with multiple big screen TV’s to streamline the process. Ralph Wilson, owner of the Bills, is 94 years old. That means that someone who is spoon-fed Cream of Wheat by a nurse and sips warm milk from a sponge is TOO FUCKING IMPATIENT to sit through an NFL Instant Replay review. Every fan feels the same way. I love instant replay but it takes much longer than it needs to. How in the world could the NFL justify keeping the process as is? Makes no sense whatsoever. I’ll still watch but every time I see their ridiculous replay review theatrics I’M GOING TO STAB SOMEBODY. (Also part of the owners’ meetings festivities.)