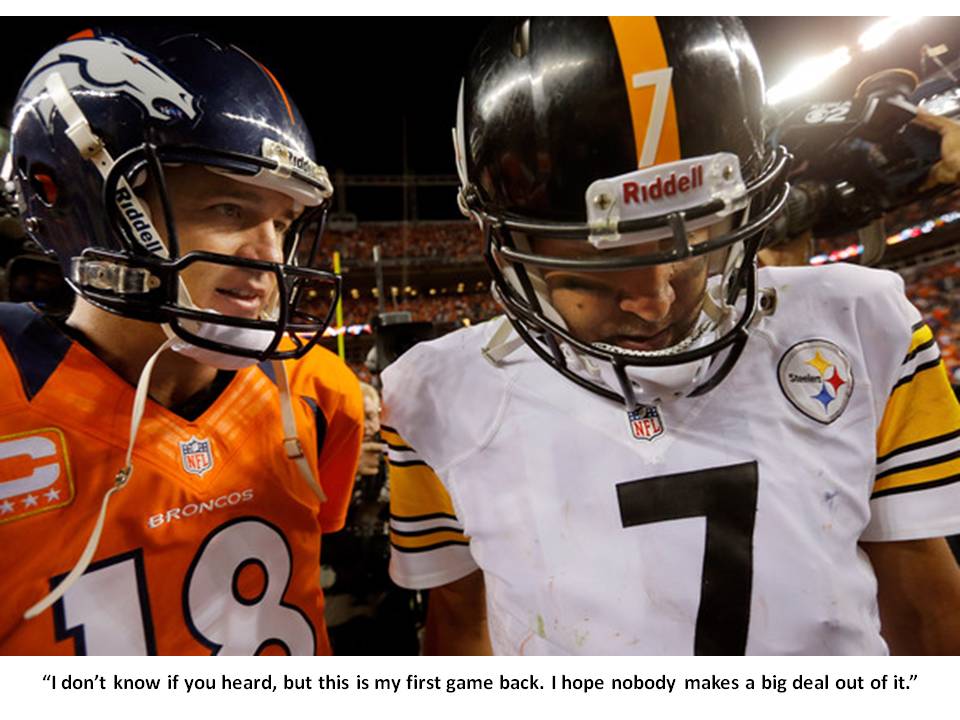 Every time the Steelers lose I make my kids go to bed without dinner. THEY WILL LEARN TO LOVE THIS TEAM. Since it was a night game, though, I just beat them.

Some notes on the loss and other stuff from week 1:

– It was the first game of the season so it doesn’t really mean anything. The Giants lost 7 games last year and they still won the Super Bowl. Let’s talk about stupid shit instead…

– They interviewed Peyton Manning after the game and his forehead looked more massive than ever. Maybe he just needs some weights on the back of his head to counter-balance? NECK PROBLEMS SOLVED. I have no idea what they interviewed him about. Probably his hot sister-in-law.

– After the game, Channel 11 News had a post-game show with Alby Oxenreiter (and some little kid who I think was his nephew). Anyway right smack in the middle of this football show, they felt the need to go to the weatherman for a forecast. IT WAS AFTER MIDNIGHT. What is it about the Local News and the fucking weather reports? Do they think they need to cram one in any chance they get just in case some old ladies are watching? By the way it’s going to be hot as balls tomorrow, Grandma.

– The Broncos will be 14 – 2 this season. John Fox took them to the playoffs last year with TIM TEBOW as his quarterback. (He should have gotten Coach of the Year for that.) He took the Carolina Panthers to the Super Bowl with FUCKING JAKE DELHOMME. He’s a great coach. Now he finally has a great QB to go along with a great defense and of course they have the greatest home field advantage of all because of the thin air in Denver. (The only other place besides Oakland where players are afraid they might die.) They will be the number one seed in the AFC and we will all hate Peyton Manning more than ever.

– Of course Peyton Manning is going to be like his old self. He probably worked harder than anyone in his recovery and he has always studied football day and night. (NERD!!!) He’s a fucking annoying over-achiever. The guy that we’re all jealous of because he’s better than us and we’re too lazy to do anything about it. The guy who always raises his hand in class. Even Thomas Edward Patrick Brady, Jr. would rather spend the off-season trying on dresses with Giselle than thinking about football. But not Peyton. He’s like the surfer that gets his cock eaten by a shark but still wants to recover just so he can get right back in the water and try to get sharks to blow him again. Peyton is an awful person because he makes the rest of us feel shitty about ourselves.

– I have no idea what is and isn’t a catch anymore. When Jacob Tamme scored for the Broncos in the 4th quarter, he caught the ball, took two steps and fell on his back in the endzone then clearly dropped it. He never had time to “make a football move” before he fell. It wasn’t even as close as the famous Calvin Johnson non-touchdown a couple years ago. The announcers were too busy fondling Peyton’s sack to say anything about it, but I am pretty sure that it should have been ruled incomplete given what the stupid rule says:
If a player goes to the ground in the act of catching a pass (with or without contact by an opponent), he must maintain control of the ball throughout the process of contacting the ground, whether in the field of play or the end zone.

– Can’t they just make the rule that if you catch the ball with two feet down it is a catch? Wasn’t that the rule for like 80 years? I have no idea why they changed it.

– Also they should have a rule that replacement officials can’t be older than 90. Did Goodell make his grandfather ref last night’s game?

– I give Arians a lot of shit because his offense was mistake-prone and couldn’t score in the redzone. Last night was no better. I hope Haley turns it around.

– Verizon is the most evil company in the world. I’ve never had shittier service. The latest issue was that NFL Redzone did not work for most of the 1pm games. I was on hold the whole time and nobody ever picked up. I can’t wait until Networks start broadcasting over the Internet and cable companies become obsolete.

– I’m a Steelers fan and even I hate Art Modell. All the good he did for that city was wiped out when the greedy bastard deserted them for more money. He was 70 years old at the time. Why not just kick back with your millions and enjoy life instead of screwing over a bunch of people? He deserves to be remembered as a villain for eternity. Cleveland should erect a statue of him fucking a goat.

– Deion Sanders got arrested for domestic abuse charges just a few months ago, but he’s still on the NFL Network as if nothing happened. Warren Sapp too. I think the message is clear—you cannot have sex with a woman in a public restroom, but smacking them up a little is okay.