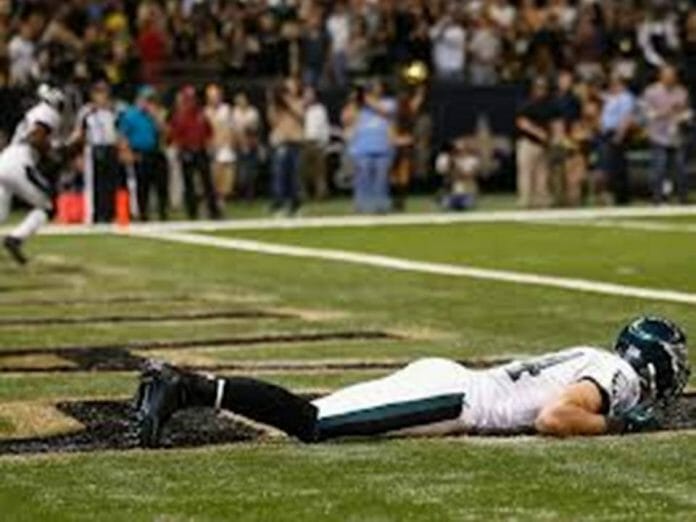 – Even though the touchdown was called back because it was an illegal forward pass, the trick play the Eagles ran on a kickoff return with Riley Cooper “hiding” in the endzone by laying face down on the turf is one of my favorite plays ever. If I had a team we would wear all green and my guys would hide like that all the time. The opposing quarterback thinks his guy is wide open? BOOM. Up pops my stealth safety to pick off the pass! Can you let the grass grow to like 2 feet? I bet there are no rules against it. You could have all 53 guys out there hiding in the tall grass. We would suck on the road, though.

– Doug Martin scored about 60 fantasy points this week. I drafted Trent Richardson in both of my leagues. Safe to say I chose the wrong rookie RB. I DESERVE TO SUFFER FOR DRAFTING A BROWN.

– The worst call during the Steelers game was the first Pass Interference that Keenan Lewis was flagged for. There was no justification at all for a penalty on that play. It’s ridiculous how many big plays are the result of bad PI calls by the refs. HERE IS THE SOLUTION. Pay for an extra ref on the field. On passes over 15 yards, you have three refs each covering a third of the field. Two of these refs must BOTH throw a flag and agree on any pass interference calls. If only one ref throws a flag– then the flag is picked up and there is no penalty. After the game, all plays where one or two flags were thrown will be reviewed by a panel of NFL executives and refs are held accountable and fired for making bad calls or bad non-calls. THE NFL WILL NEVER DO THIS BECAUSE IT MAKES TOO MUCH SENSE.

– I have a hard time believing that Bruce Arians has anything to do with the Colts 5 – 3 start. Chuck Pagano must have had that team ridiculously prepared going into the season. Obviously he could have had a child coach the team after he laid the groundwork all off-season. That man is a genius. I’m happy his recovery is going well and I wish him all the best.

– How is Romeo Crennel still not fired? Only a GM that was dumb enough to hire him in the first place would be dumb enough to keep him around this long. Ordinarily, I would be worried about this being a trap game for the Steelers, but I honestly see us winning by 4o points easily. At the post-game handshake with the opposing coach every week, Crennel should be handing out his fucking resume. “Look me up in about two weeks!”

– Chuck Pagano had the Colts so well prepared that they would be 5 – 3 with Crennel as their interim coach.

– I was sick on Saturday night (found out on Sunday that I had strep throat). I was so sick that I couldn’t sleep and I couldn’t wait until Med Express opened in the morning. I had to wait an extra hour because of Daylight Savings, of course– which marks the first time EVER that anyone was COMPLETELY SCREWED BY THE EXTRA HOUR OF SLEEP. I feel so cheated. I didn’t even know about it until I realized that the time on my cable box was an hour behind the time on my microwave. Ordinarily, I would have sided with the microwave, but Daylight Savings popped into my head and I realized the cable box was right. It’s a good thing, because otherwise I would have inadvertently shown up at the Med Express an hour early and thrown a tire iron through the window. (I was really, really sick.) This has nothing to do with football, I just like talking about myself.

– The Redskins throwback uniforms were awesome. Including the helmets. They should switch to them permanently.

– I finally got around to watching “A Football Life” on the ’95 Browns. It was a great episode, but what exactly was so great about that staff of Bill Belichick’s? Most of them aren’t even in the NFL anymore: Eric Mangini (fired by the Browns), Mike Lombardi (fired by the Raiders), Nick Saban (left Miami after 6 – 10 record) and Kirk Ferentz (went straight to Iowa). Scott Pioli is a failure as a GM with the Chiefs and likewise with Mike Tannenbaum for the New York Jets. The only NFL head coach from that group is Jim Schwartz of the Lions who is on his way to his third losing season in four years. The only two success stories are Ozzie Newsome, GM of the Ravens and Thomas Dimitroff, GM of the Falcons. It’s not like Belichick had assembled some crack team of super genius proteges. WE GET IT NFL, YOU WANT US TO FORGET ABOUT SPYGATE. The best part of that show was when they explained that during the last game in Cleveland, the teams had to switch sides every time the ball crossed the 50 yard line because they were terrified of what the fans in the Dawg Pound might do. Then they cut to footage of them tearing the stadium apart. Cleveland is full of morons.

– I can’t take Drew Brees seriously until he goes through puberty.

– I was astounded by how many “experts” predicted the Bengals to win the AFC North this year. I tweeted before the season that they would be 7 – 9 at best. The AFC North had a very easy schedule last season which was a big reason for them going 9 – 7 and making the playoffs. The division will belong to either the Steelers or Ravens as usual. The best current rivalry in Sports.

– Were it not for the blown calls by the refs and the terrible fake FG, the Steelers would have soundly beaten the Giants. What is most impressive about the win is that EVERYONE played well. It was just a solid team effort and they overcame even MORE injuries. I was especially impressed by the special teams coming up with big returns throughout the game.

– How is Bill Leavy still officiating after contradicting his superiors and apologizing to the Seahawks for Super Bowl 40? That man needs help.

– The fact that Alameda Ta’amu (Shamu) is still on the roster makes me think we have our Nose Tackle when Hampton retires. If he can stay out of prison– that kid is going to be real good. If the Steelers didn’t think so, they would have waived him immediately. Makes me wonder how much they would have tolerated? One kill? TWO kills?? HOLY SHIT–THREE KILLS??? How good is this guy??? (I’m very glad he didn’t kill anyone and I hope he realizes how lucky he is and mostly I hope he’s as awesome as the Steelers suspect.)

– Polls are almost closed. DONT FORGET TO VOTE. Or exercise your right not to vote. Either way, I don’t give a shit. Meet the new boss, same as the old boss.