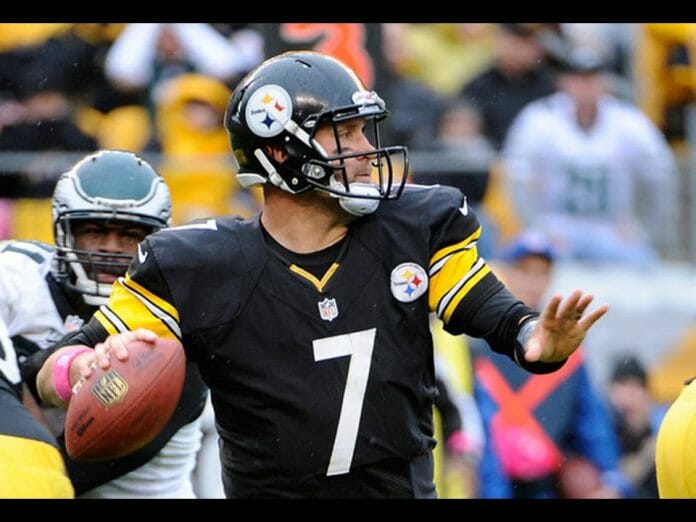 – Here’s a link to a great write up by Daniel Jeremiah on how underrated Ben Roethlisberger is. He has been so spectacular in his career that I think a lot of fans take it for granted how automatic he has been on third downs. It still astounds me that there are Steeler “fans” who don’t think he is any good. Or maybe they’re just Charlie Batch creditors hoping he gets more starts that could lead to one last big payday?

– I hope Chuck Pagano makes a full recovery, but I don’t get all the emotion from the Colts players. He was only their coach for three games– they couldn’t have been that attached to him.

– They just let Sean Payton watch the Saints game in the stands like any other fan. Goodell should have stipulated that he had to wear old-timey, black-and-white striped prison garb. Or a Hannibal Lector mask.

– So happy to see Green Bay lose to the Colts. Aaron Rodgers deserves to go 2 – 14 after acting like such a spoiled bitch after the Seattle game. He was described as frustrated and curt in this post-game interview this week. You never hear Roethlisberger handle himself with anything but class after a loss and he doesn’t blame anyone but himself.

– Remember when Willie Colon played Tackle for us before his two year tour of duty in Iraq? He was good for at least two pre-snap penalties a game back then. NONE on Sunday…but he did have four holding penalties. Baby steps.

– I watched the Packers/Colts game on Fox after the Steeler game until they were forced to stop showing it due to the NFL’s bizarre broadcasting rules. Are you enjoying the extra coverage? Well, fuck you…here’s a fat guy in the studio. Thank goodness for the NFL Redzone– I was able to watch the rest of the game anyway. A few years ago I would have been going ballistic..like Aaron Rodgers after they fuck up his take-out order.

– What was up with the Kurt Coleman throwing Antonio Brown’s shoe into the fucking Allegheny river? How is there not a rule against that? And how is that not part of every team’s defense against the no-huddle? Tackle a guy, throw his shoe into the stands. Let’s see how good the offense is when all their receivers are running around in bloody socks.

– Thank God Shaun Suisham made that last second kick on Sunday. Did you see him before and after the kick? Expressionless. ALL BUSINESS. Did they give him a lobotomy? My deaf/dumb/blind kicker theory may have some merit. It would have sucked so bad to lose to Philadelphia. That city is awful. They should have played this on the scoreboard at halftime.

– The Ravens scored 9 points in a close win against the lowly Chiefs on Sunday. Joe Flacco’s completion percentage was under 50% with no touchdowns and 1 interception. The Chiefs were allowing an average of 34 points in their previous 4 games. How is it that Flacco hasn’t gotten that big contract his agent has been pushing for? HE’S SO ELITE.

– On the Dan Patrick show on Monday morning he was asked in hindsight who he would have taken first overall in the 2004 draft. He said he would have taken Eli Manning over Roethlisberger because of Roethlisberger’s off-field issues. It’s criminal that Roethlisberger’s reputation will always be tainted by a couple of unsubstantiated rape allegations. I can’t wait until Millidgeville police chief Woodrow Blue writes a tell-all book someday about that evil, lying Georgia whore. Funny how the Packers gang rape allegations were quickly swept under the rug even though it was a fairly similar incident. The Packers can do no wrong. Imagine how fucking pissed Rodgers would be if he was falsely accused of rape.

– Don’t forget the Steelers play on Thursday night this week!!! I will probably have nightmares until then that it’s Friday morning and I forgot to watch the game and they lost by four touchdowns. My wife will probably get really pissed when I wake her up to ask her what day it is. ARE YOU SURE WOMAN?