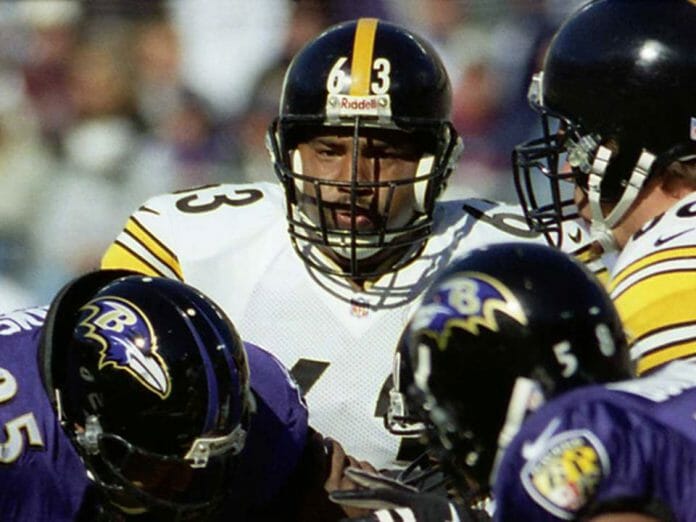 Just some quick thoughts before the Hall of Fame inductions today:

– Dermontti Dawson’s induction is well-deserved because he dominated for his entire career. A lot of that domination was from pulling and leading on sweeps– which was rare for the center position. Maybe the notoriety will help him get his finances back on track. I have no sympathy for former players and their money problems, though. The $55M he earned over the span of his career is a lot of money to blow.

– I can’t tell you anything about Jack Butler, but it is cool having yet another Steeler inducted into the Hall of Fame.

– The Steelers were founded in 1933 and have played in 8 Super Bowls, winning more than any other franchise (6). It takes great players to accomplish what they have. THAT IS WHY THEY HAVE SO MANY HALL OF FAMERS. Anyone who complains about too many Steelers in the HOF can STFU already.

– On that note, Jerome Bettis ABSOLUTELY belongs in the HOF. There are no other big backs in the NFL that have accomplished what he has. He was a dominating runner on teams that lacked a successful passing game for most of his career. He is currently the 6th all-time leading rusher. Anyone that thinks he does NOT deserve to be in the HOF is a complete ASS. That means you, Pete Prisco of CBSSports.com who once said so in a radio interview.

– Paul Zimmerman doesn’t vote for Ken Stabler for the HOF because he doesn’t respect his off-the-field antics. To be fair to Zimmerman, he believes that Stabler’s drinking and partying contributed to mistakes on the field. But this is still the best argument for why the media SHOULD HAVE NO SAY WHATSOEVER in HOF voting. Media members can be petty, righteous assholes. There should be a rotating panel of ex-coaches, ex-scouts and ex-players that vote instead.

– Ray Guy, on the other hand, is the best punter ever and SHOULD be in the Hall of Fame. It’s not like Steve Tasker (or anyone else EVER) could do what he did. As long as punts are part of the NFL game then the greatest punter EVER should be given the game’s highest honor. Adam Vinatieri should also be in the HOF someday for carrying all of those Patriots Championship teams. Can’t win it without him, eh, Belichick? Fuckface.

– If Andre Reed and Chris Carter (both deserving) don’t get into the HOF soon then Hines Ward is not going to get in which would be seriously wrong.

– Bill Parcells is presenting Curtis Martin which could be awesome if Parcells is his usual dickish, sarcastic self like every other time he’s had a microphone in front of his face. If Parcells is eloquent I’m going to be pissed.

– I hope commissioner Roger Goodell speaks at some point during the ceremony. Whether it’s deserving or not, I think it’s hilarious when he gets booed. I hope someone throws feces at him.

UPDATE 1:30pm: Right after I posted this I turned on the NFL Network to see that ridiculous documentary on Ed Sabol and it reminded me how pissed I was when he was inducted last year. It’s been awhile, but I figure it is worth re-hashing how asinine it was to put the CAMERAMAN in. Sorry, fellas, I know how hard you worked with all your sweat and blood and all– but we don’t have any more spots for an actual PLAYER. We have to put Sabol in! Lord knows nobody EVER would have thought to put football on television if it weren’t for him. Oh, what’s that? That’s actually you in his footage? That’s you making a play? Well, that’s nice. HOLY FUCK. That really sealed it for me on how ridiculous it is having the media elect HOF members. They might as well put Tasker in now. The Hall is tainted. Put Frank Pollard in. Fuck it, put Pete Prisco in too.