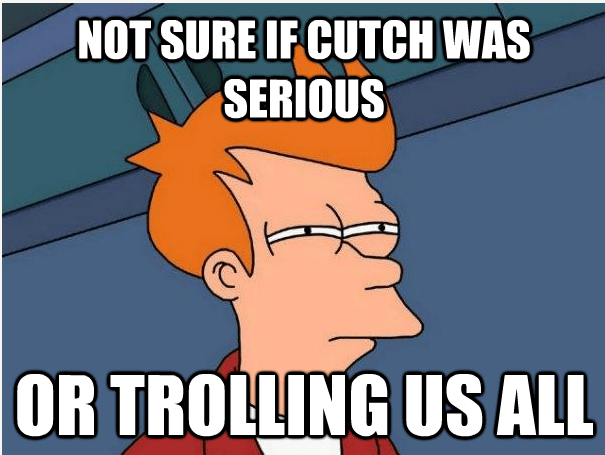 So Andrew McCutchen took to the Twittersphere on Monday complaining about flying coach, and local sports personalities like Ron Cook and even national blowhards like Bob Ryan, went ballistic.

Many fans took issue with Cook especially and chastised him for being “too negative” on the Pirates in the midst of a miraculous season. (By the way, aren’t we on the same page as last year’s “miraculous” season through mid-July?)

Those of us who are immersed in the Internets daily understood that Cutch was, of course, joking. (LOL)  In fact, Cutch even took the time to tweet a clarification:

Cutch was obviously pissed with that layover. I know I get cranky when I’m stuck in the airport for even just an hour. So tweeting something like, “I’m going to blow up this airport if I don’t get on this mother fucking plane soon,” probably wouldn’t go over well with the FAA and Pirates’ management. Still Cutch has no reason to complain. He’s making millions, is the current batting average leader in the majors, and has a hot woman by his side.

For the record, I do find some players’ tweets entertaining.

Anyway, I take umbrage with both sides here—first with Cook and Ryan for just being so out of touch with today’s smartphone generation that they failed to realize that Cutch was only kidding. It was a non-story, but they wanted to turn it into a story which thankfully fizzled fast.

But I also take issue with some of the fans who are suggesting that Cook be a homer and write only positive columns. Really? That’s what Pirates.com is for. They write the fluff and spoon feed it to us. I want local sports journalists to be critical of our local athletes, and not star fuckers. One fan wrote in to Cook and said, “You attempted to write a negative article about Andrew at a time when he has done so much to bring excitement back to Pittsburgh baseball. And on the eve of his homerun derby and all star game.”

It’s not just the Pirates. I hear people bash sports writers when they say something bad about a Steelers or Penguins player too. Too many journalists coddle star athletes these days and want to be buddies with them. (I actually used to work with the Pirates as a teenager in the clubhouse and witnessed far too many journalists who requested autographs from the players for their kids. That pissed me off because it took away autographs that I could have gotten.)

So in a way, I was kind of glad that Cook wrote what he did (even though it was a pointless piece). Working for the Pirates’ flagship radio station really hinders what Cook can say about the Pirates, so this was sort of refreshing to see. Same goes for the Steelers and WDVE. Rumor has it that Rooney really has radio management by the balls, which is why we don’t hear too many negative stories from 102.5, or from any local sports outlet for that matter.

By the way, Cutch should thank Cook for the publicity. He gained nearly 3,000 followers since Monday because of this, and is now up to 80,000+.

You can follow our inane tweets daily @smorgasburgh. We’re up to 600+ followers and we always fly coach.