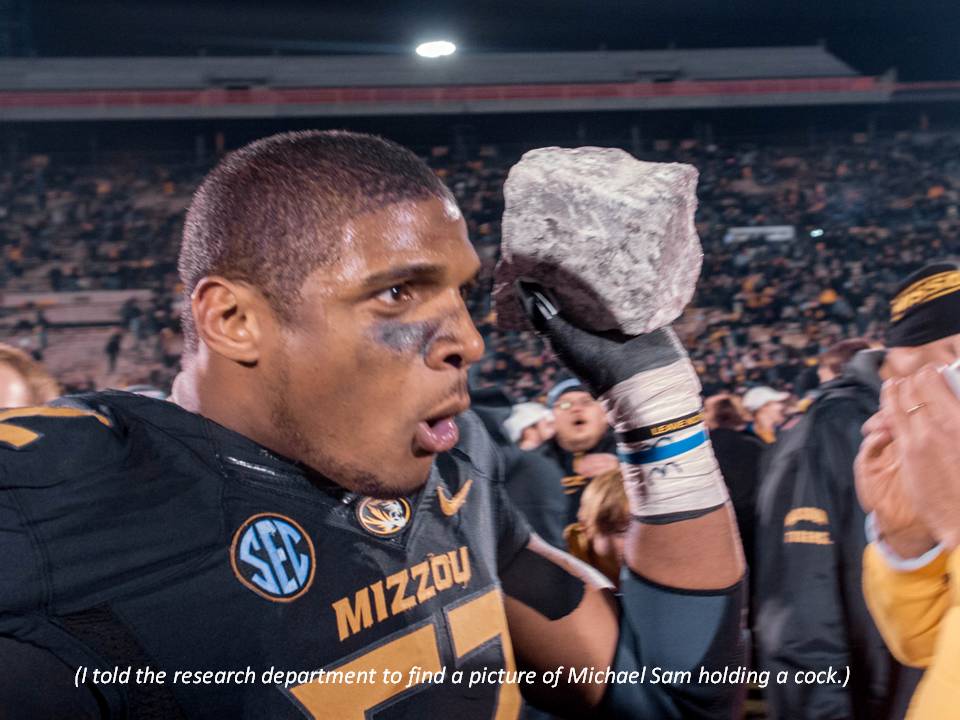 Michael Sam, the NFL’s soon to be first openly gay player, has been a hot topic of conversation this offseason– except, ironically, among the gay male community which isn’t really that into football. But do you really think he’s gay? Really? I know what you’re thinking– I’m an asshole. Criticizing a courageous role model for young homosexuals everywhere. However, I am NOT questioning Michael Sam’s courage one bit. Not at all. In fact, you know what would be even more brave than a gay man coming out of the closet before he enters the NFL draft? A straight man PRETENDING to be gay and coming out of the closet for the draft. That takes fucking balls. I salute you, Sam, whether or not you are lying out of your gay ass.

I have absolutely no proof that he is lying. I am just wildly speculating, because I have a disorder. But will we really ever know if he is gay? It’s not like they made him blow some dude at the combine.

Why would he pretend to be gay? What would he have to gain? ONLY THE MOST MONEY EVER. There will no doubt be a major motion picture some day about him. Hollywood loves gays. There is also a very lucrative book deal in Michael Sam’s future. I even have the title already picked out for him:

Put Me In, Coach! …Put Me ALL the way in

Then of course, there is the talk show circuit and maybe even a reality show. He could be a complete bust in the NFL, but still be set for life (even taking into account all the money he’ll throw away at Barneys and Abercrombie & Fitch). He is going to make piles of money. Manti Te’o is going to be kicking himself for not having an imaginary boyfriend.

Or maybe Sam just wants the attention? Like some asshole pounding away on a keyboard blogging about nonsense.

Another very good possiblity is that Roger Goodell is forcing him to pretend so the NFL can delve into the untapped gay demographic. There are millions of homosexuals and none of them watch the NFL right now. Sam drew the shortest straw– and now he has to pretend to be gay or Goodell will have him anally raped. There are a lot of gay men and women out there who would rather go to the gym, the park or take a cooking class than watch football on Sundays. Basically, bettering themselves– and Master Goodell can’t have that! You are practially taking money out of his pockets (while gently caressing his inseam).

Maybe Sam doesn’t even really know his sexual preference yet. He’s still in college for fucksake. Kids in college have no idea what the fuck they want to do in life. And it’s quite possible that they have no idea WHO they want to fuck either. Look at how many guys get married and have kids and then chug cock on the down-low the rest of their lives. Girls can be the same way. Google “bisexual actress” and every actress in the world pops up. None of them know what they want. Megan Fox is bi. Christina Aguilera is bi. Marilyn Monroe was rumored to be bi. And everybody knows that Hilary Swank is really just Matt Damon in drag. Gay, straight, bi, transexual– sometimes people just want to sample it all.

Is Michael Sam really gay? I don’t know. Maybe nobody really knows– and it’s really none of our business anyway. What I do know for sure is this: only a straight man would PRETEND to be gay. Think about it.

Let’s just take his word for it and assume he is. More power to him. There are a lot of homosexuals out there who have struggled with their sexuality and have faced prejudices and even violence because of it. That’s terrible. There are still a lot of ignorant and hateful people out there who won’t accept gays and respect them; and if Michael Sam helps open their eyes, then that is fantastic. I really do believe that NFL fans will be accepting and soon he’ll be just another player. Of course, he will get death threats eventually, but only because of jumping offsides late in a big game– not because he’s gay. And Fred Phelps will roll over in his grave and everything will be alright. Then maybe we can all focus on the really enemy– the filthy fucking Irish.

How To Create a Bee-Friendly Environment

The Best Ways To Enjoy Honey in the Summer