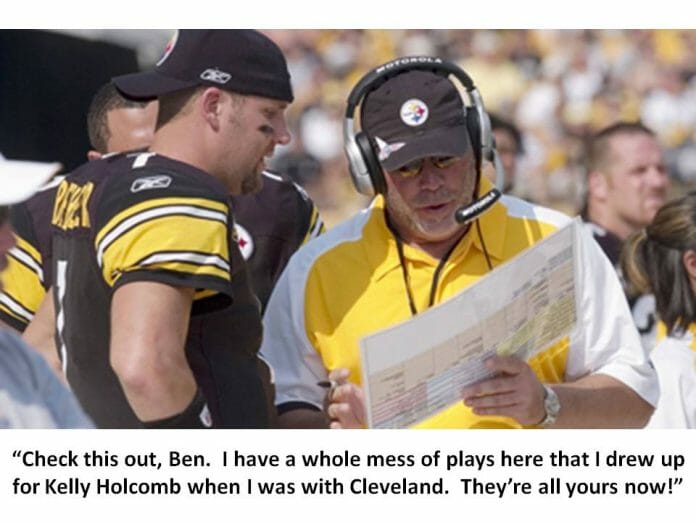 The often underperforming Steelers offense will finally have a new coordinator as the Steelers have announced Bruce Arians’ firing retirement.  Arians was promoted to Offensive Coordinator in 2007 by ownership after former coordinator Ken Whisenhunt left to take the head coaching position for the Arizona Cardinals.  The team did enjoy immense success during Bruce Arians’ tenure as OC as they played in two SuperBowls (winning one) and made the playoffs in four of his five seasons.  But many would argue that the Steelers have enjoyed such success more on the heels of their outstanding defense and quarterback and despite the offensive game plan and playcalling.  I am most certainly one of those people.  Read on, Internet Stranger!

Let’s looks at team rankings.  During Arians’ five years as OC from 2007 to 2011, the team has ranked 9th, 20th, 12th, 12th and 21st in scoring.  During those same five years, their defense has ranked 2nd, 1st, 12th, 1st and 1st in points allowed.  The one year where the defense faltered, in 2009, the team went 9 – 7 and failed to make the playoffs.  Let me expound on that:  the ONE FREAKING YEAR where the defense wasn’t first or second in points allowed, the offense COULD NOT carry the load and they missed the playoffs.  Think yardage is a better indicator of offensive success?  Those numbers are worse.  From 2007 to 2011, the team was 17th, 22nd, 7th, 14th and 12th in yardage.  The defense?  1st, 1st, 5th, 2nd and 1st.  I’m seeing a huge discrepancy in how AWESOME our defense was and how SHITTY our offense was.

Let’s talk about personnel.  Many people argue that the Steelers have invested much more in their defense than their offense in recent years.  (Maybe even in their history).  While they have used 1st round picks on many defensive players (Hampton, Polamalu, Timmons, Hood and Heyward) many think the offense has been ignored.  NOT TRUE.  Recent first round picks on offense include Roethlisberger, Miller, Holmes, Mendenhall and Pouncey.  Pretty even split there.  Many Arians’ defenders will point out that other than Pouncey, the offensive line has been neglected in the first round.  But many teams have shown that a productive offense can be had without investing top picks in the offensive line anyway.  The New Orleans Saints, the top offense in football this season, do not have any starters on their line drafted in the 1st, 2nd or 3rd rounds.  They are all late round draft picks or undrafted free agents.  The Green Bay Packers have taken tackles in the first round in the past two years, but haven’t drafted a first round offensive lineman before that since 1997.  And this year’s first round pick, Derek Sherrod, wasn’t even a starter.  So they fielded an offensive line with only one first rounder as a starter and still managed to be one of the top offenses in football.  Their other four starters?  Late round picks and undrafted free agents.  And oh, by the way, the starter that was a first rounder, Bryan Bulaga, was injured this season and only played 12 games.  Another top offense this season, the Philadelphia Eagles, also only had one starter that was drafted in the first round, rookie Danny Watkins.  The other starters were drafted in the third round or later.  The New England Patriots starting offensive line has just as many undrafted free agents (two) as they do first round picks.  And one of those first round picks, Nate Solder, was a rookie this year.  As the top offenses have shown—you can be productive in offense without investing early round picks on the offensive line.  It is possible to either develop linemen or devise an offensive scheme to make the best out of what you have.  So the next time anyone uses this excuse for Bruce Arians, HIT THEM IN THE FACE WITH A TIRE IRON.

We can’t just gloss over offensive personnel, however, without mentioning Ben Roethlisberger.  One of the top Quarterbacks in the game today, Roethlisberger has a career passer rating of 92.1 which is good enough for 8th among active quarterbacks.  The other quarterbacks ahead of him are Rodgers, Romo, Brady, Rivers, Manning, Brees and Schaub (seriously, fucking Matt Schaub!).  Ignoring the Colts and Texans because of Manning’s and Schaub’s injuries this season, those other Quarterbacks played for teams that were among the most productive in offense this season.  The lone exception is Romo whose Dallas Cowboys were 15th in points and 11th in scoring—but still ahead of the Steelers in both categories.  Let’s look at 2010.  In 2010, all seven of the Quarterbacks ahead of Roethlisberger in career passer rating played in offenses that were among the top nine in yardage and they were all ahead of the Steelers in points scored.  The Steelers were 14th in yardage and 12th in points scored.  In 2009, 6 of the 7 quarterbacks ahead of Roethlisberger played on offenses that were in the top 10 in scoring, unlike the Steelers.  The other exception was the Dallas Cowboys at 14th.  What does all of this mean?  The top Quarterbacks in the league usually translate to the top offenses in the league.  But despite having the 8th best Quarterback in the league, based on passer rating, the Steelers have not cracked the top 10 in scoring since 2007 when they were 9th.  The 8th best QB in the league played on offenses that were 21st, 12th, 12th and 20th in scoring in the last 4 seasons!  While other offenses with great quarterbacks were able to translate that into scoring points—the Steelers under Bruce Arians were NOT able to do so.

What did I mention at the beginning of this post?  Defense and Roethlisberger have carried this team in the last five years DESPITE Bruce Arians.  As the stats have shown, the defense and the quarterback are among the best in the league—but the offense is not.  The Steelers can only be better off without Arians.  I think the evidence is there.  But don’t just take my word, Internet Stranger, trust the Steelers on this one.  There is much speculation that Arians was forced to retire.  He recently stated that he would be returning in 2012, but now he retires out of the blue?  Gerry Dulac wrote an article in the Post Gazette this morning that strongly suggests the Steelers did not want him to return  (by the way, Dulac seems awfully defensive of his golfing buddy).  I tend to trust the Steelers who have been known to make excellent choices in coaching and management.  If they think that Arians needs to go—then it is best that he goes.  AND TAKE THE FUCKING BUBBLE SCREEN WITH YOU.  I had nothing against the bubble screen, by the way, but the play loses its effectiveness when you run it multiple times a game and it pretty much takes the ball out of your franchise QB’s hands.  I’d much rather trust Roethlisberger on completing a pass downfield than hope the defense doesn’t guess right on yet another bubble screen.

Although I’ve been wanting another offensive coordinator for years, I do NOT want the Steelers to run the ball more.  They have a great QB and need to take advantage of that.  I want to see more passes on first downs.  I want to see more slants, quick outs and rollouts to try to minimize the number of hits Roethlisberger has been taking.  I want to see more no-huddle which is usually very effective under Roethlisberger.  I never want to see another play action pass in an obvious passing situation, but definitely want to see one called strategically when the running game is working.  I want to see less empty backfield sets to try to afford Roethlisberger some more protection and the threat of a draw.  I would also like to see a halfback screen pass integrated into our offense again.  I think Mendenhall would be very effective with them.  But, most of all, I want to see less mistakes.  I don’t want to hear excuses made by the offense that the WR didn’t recognize a blitz and realize he was the hot route.  I don’t want to see pass patterns where two receivers are in the exact same area and one deflects a pass just out of his reach that was intended for the other.  I don’t want to see the Steelers waste 30 seconds in a hurry-up situation because they look completely disorganized.  All of this should translate to more points.  Or maybe not because I have ABSOLUTELY NO EXPERIENCE IN THIS AREA.  But I do watch a lot of football, so my word is just as good as any other asshole on the Internet.  Hopefully the new Offensive Coordinator can meet my expectations.  OR I WILL HAVE HIM CANNED TOO!