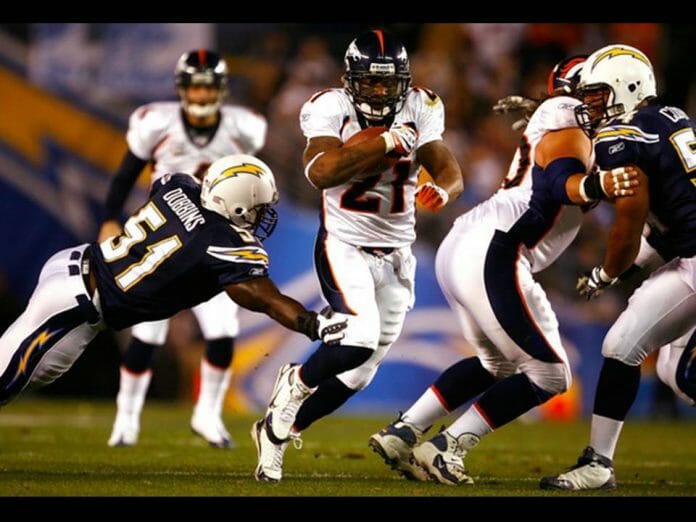 I bought a Fantasy Football magazine the other day. I know the Internet pretty much makes every magazine a complete waste of money– including Fantasy Football ones– but I still like to buy one every year as my own official kickoff to the football season. Once I have that magazine in my hand, I know training camps are just around the corner…and then pre-season games…and then OH THANK YOU GOD– FOOTBALL SEASON!!! (Although it is actually very nice to have my Sundays open right now to do stuff instead of sitting in front of the television all day like I do during football season. But I do love football oh so much– so September can’t come soon enough. Plus I hate mowing the damn lawn. FUCK YOU NATURE WHY DO I ALWAYS HAVE TO FIX YOUR SHIT?)

The frustrating thing about FFB magazines, though, is that they are printed early in the year– like May…so they are pretty much out of date when you buy it and by late August when you have your draft, they are useless. I remember in 2005 “Fantasy Football Index” had Denver’s Tatum Bell on the cover and he ended up being a backup going into the season. He’s out of football now. And they had him ranked as the 3rd best RB overall. DO NOT EVER BUY FANTASY FOOTBALL INDEX MAGAZINE.

I have no idea why FFB magazines are printed so early? Is it so they have a built-in excuse for when their rankings suck? Why don’t they just print them in August so at least they are semi-relevant when our fantasy drafts roll around? May is way too early. Smorgasburgh doesn’t post our annual St Patrick’s Day extravaganza in November. That would be fucking stupid. Actually, we never have a St Patrick’s Day post but if we did it would be in March because we are not idiots. (For the record, I don’t even celebrate St Patrick’s Day because of how the Irish oppressed my Italian ancestors when they first immigrated to this great country. But one day we will exact our revenge on you Irish hoodlums! Italians are nothing if not vengeful. We’re also notorious procrastinators, though, so it may be another 100 years before we do anything about it.)

All FFB magazines are pretty much the same to me as far as content. (Except “Fantasy Football Index”. We’ve already established that they have their heads up their asses.) They all have stats from the previous seasons, and they rank players for the coming season and they have a mock draft or two and ads with chicks in bikinis. So what do I look for when I buy a FFB magazine?

PRICE. Every magazine I looked at cost $7.99 except for one that was just creatively named “Fantasy Football” and cost $9.95. FUCK YOU. For that extra two dollars they better have something really enticing like a section featuring naked NFL wives. It does not. Cross that one off your list.

That’s it. Those two factors are all I care about. Give me the cheapest FFB magazine with glossy porno-quality pages. I don’t even give a shit about who’s on the cover. At all. But for the record almost every one had Adrian Peterson featured. WAY TO STICK YOUR NECK OUT, FELLAS. But “USA Today’s” Fantasy Football magazine did have Thomas Edward Patrick Brady, Jr and LeSean McCoy sharing the cover. They did not get the memo on Peterson.

For the record, I ended up settling with “Athlon’s” FFB magazine. It was shiny and glossy and it cost $7.99 and Adrian Peterson was on the cover so I know they are on the ball. It probably will not help me win in either of my leagues, though, because they have Aaron Hernandez ranked as one of the top Tight Ends.