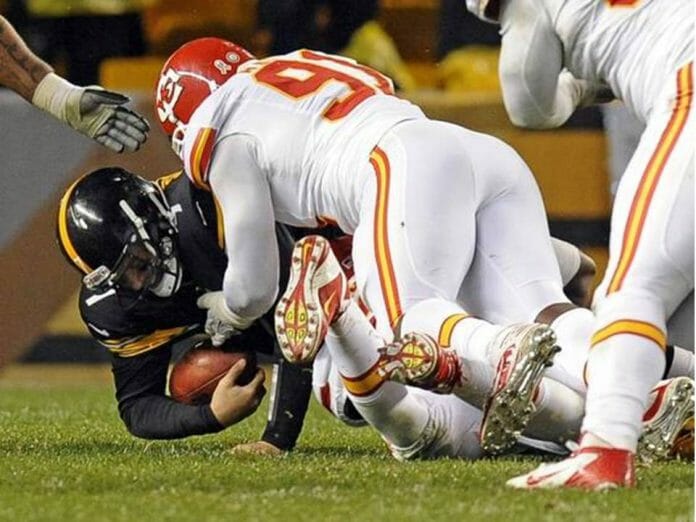 By now everyone knows that Ben Roethlisberger has a sprained shoulder and everyone is sad and Baltimore is coming to town and this is all a worse tragedy than Sandy. Okay, just kidding…scratch that last part. I had a leak in my dining room from all the rain so I know all about the suffering. But this Roethlisberger thing is really bad, right?

Everything I know about science comes from television and movies. Seriously, why are colleges still having lectures? I didn’t learn anything from that Chemistry course freshman year but I am pretty sure I can make a decent batch of Crystal Meth just from watching the first season of ‘Breaking Bad’. And who can’t deliver a baby calf after watching ‘City Slickers’?

Speaking of births, if Ben does miss any games, his wife better deliver while he’s injured. I was all fine with him missing one game to witness the miracle of childbirth but if he has to sit out two games for his shoulder and then miss a THIRD for the baby THEN I WILL BE SERIOUSLY PISSED. Also he better not be feeding the baby. THAT MAN NEEDS HIS REST. Holding a baby bottle while the baby takes a few sips THEN A FUCKING NAP, then a few more sips THEN ANOTHER FUCKING NAP can be excruciating on the shoulder. Have Batch come over to feed the baby. Plus Ben’s baby is probably going to weigh about 30 pounds and that can’t be good for the shoulder either.

Now that Ben has a shoulder injury it behooves us all to learn as much as we can about the ailment so we can second guess him and the organization as they deal with it. When studying up on shoulders I highly recommend watching ‘Lethal Weapon 2’ again. Some of you youngsters who have never seen ‘Lethal Weapon 2’ need to put your Internet away right now and GO SEE IT. I have to warn you, though, that in the 80’s they made action movies without vampires or wolves. Repeat: no wolves. Also, don’t let the fact that Mel Gibson is a woman-hating racist, deter you from watching the movie. That is just Mel Gibson, the person. Mel Gibson, the actor, is a perfectly nice guy.

Anyway, in ‘Lethal Weapon 2’, Martin Riggs dislocates his shoulder ON PURPOSE to get out of a straight jacket to win a bet. IT LOOKS AWFULLY PAINFUL. But then Riggs just pops it right back into place. WHICH IS EVEN MORE PAINFUL. But the point I am trying to make here is that Riggs was just about 100% after said shoulder separation. FULL RECOVERY. And he had no medical treatment whatsoever. Also, a dislocated shoulder is way more serious than Ben’s sprain. If ‘Lethal Weapon 2’ is any indication, then Ben will be perfectly fine, and sooner than we can expect. They didn’t show Riggs throw a football through the rest of the movie, (I’m not even sure it was his throwing shoulder) but that would have been child’s play compared to some of the shit he actually did do:

– He falls 7 stories out of a hotel into a swimming pool, then punches Joe Pesci in the face 5 times. Despite the shoulder injury, his punching motion was very fluid.

– Hangs off the balcony of a house to avoid gunfire then chases a truck on foot and climbs up the back of it while it is moving full speed.

– He falls off the back of the truck and rolls several feet. Again, there seem to be no ill effects from the shoulder injury.

– Uses both arms to pull his partner off an exploding toilet into a bathtub.

– Dislocates his shoulder purposely AGAIN to escape from drowning then immediately kills two guys before popping it back into place. (Ben only sustained one shoulder injury.)

– Tears a house down with a truck. The truck kind of does all the work here, but afterwards he pumps his fists pretty hard in celebration. The shoulder looks fine.

– Rapels down a line while firing a machine gun.

– Beats up some karate guy.

– Gets stabbed in the leg. This has nothing to do with his shoulder, but I figured it would be worth mentioning with Ray Lewis on the other sideline next week.

As you can see, there is absolutely nothing you can’t do with a bum shoulder. Recovery is quick and easy. Riggs was fine and Ben will be too. I wouldn’t even be surprised to see Ben play this week.

By the way if Ben is Riggs then Byron Leftwich is Roger Murtaugh. (Because they’re both black.) This is not good because Murtaugh hardly does anything in ‘Lethal Weapon 2’. Once he almost gets killed taking a dump. I could see Leftwich hurting himself taking a dump– he’s the most fragile QB of all time. I just hope he can stay healthy enough to beat Baltimore if Ben can’t go. After that it’s Cleveland and we should beat them regardless of who plays QB. Then it’s Baltimore again and if ‘Lethal Weapon 2’ has taught us anything, it’s that Ben should be perfectly healthy by then. But Leftwich may be dead. And they fuck you at the drive-thru.