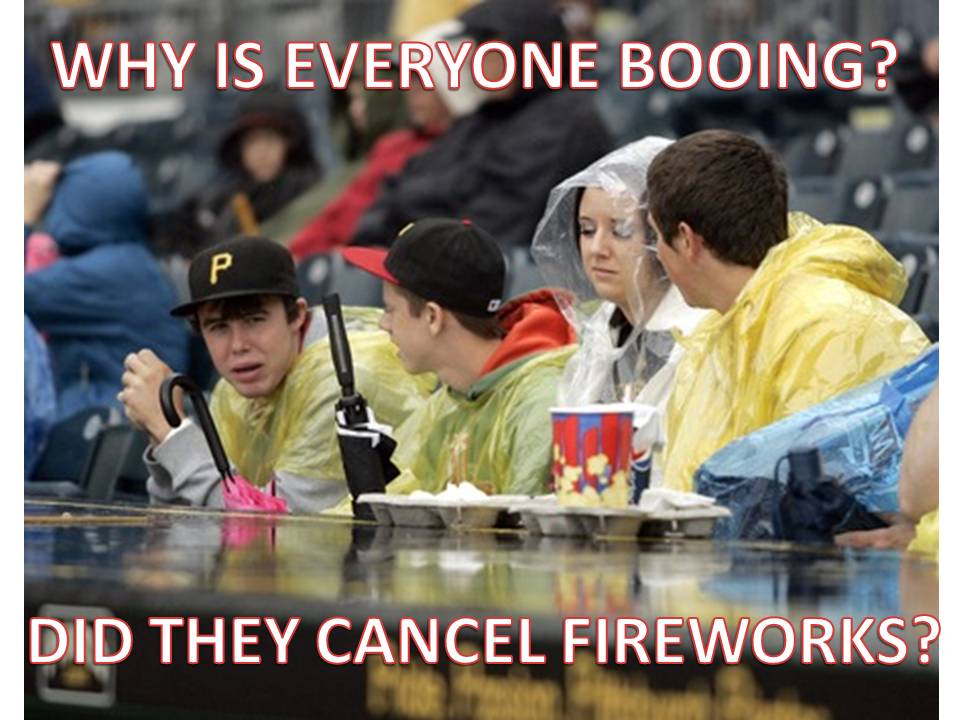 I have younger cousins that are huge Pirate fans. Because I’m a dick, I sent them both sympathy cards on Sunday when the Pirates clinched their 20th consecutive losing season. The truth is I actually have no sympathy for anyone who roots for the Pirates and had any hopes for a playoff appearance this season. They deserve the pain and anguish they had to endure as they watched the team crash and burn in the biggest collapse in MLB history. Hoping the Pirates make the playoffs is futile and stupid. Any “fan” who still hasn’t learned that by now is a fucking idiot. They will never win. It just can’t and won’t happen as long as the organization doesn’t care.

Do you know why they collapsed?

THEY DON’T HAVE THE PAYROLL TO COMPETE AND MLB WON’T CHANGE THEIR ECONOMIC STRUCTURE TO ALLOW SMALL MARKET TEAMS TO MAKE A PROFIT WHILE FIELDING A COMPETITIVE TEAM.

Holy shit. Did you really need me to spell it out? It’s been the same story for two decades. (Yes, we can now measure their losing streak in DECADES. Wrap your face around that!) The fact is they over-achieved during June and July because their schedule was soft. (They were fortunate to play in a division with the Cubs and Astros who both lost over 100 games.) Then they just didn’t have the depth to remain competitive through the rest of the year against teams with much higher payrolls.

It’s not Hurdle’s fault. No manager can win with this team. To his credit, he’s done better than most. But no other manager is going to make things better. They shouldn’t fire Hurdle– but the humane thing to do is to take him out back and shoot him.

Anyone who argues that the Pirates do have a chance to compete as evidenced by their strong June and July is sorely wrong. Below I break down the highlights and lowlights of the 2012 season. You can see for yourself that the team’s mid-season success was a fluke. Because we’re SmorgasBurgh, I’ve also created a scale dedicated to their biggest fan and the National League’s number one homer announcer, Greg Brown, to measure the fans’ enthusiasm throughout these highs and lows. It’s called the Greg Brown Homer Boner Meter. Each milestone is assigned a value of 1 inch (limp) to 5 inches (raging). A typical Pirate season would stay steady between 1 and 2 inches throughout. FLACCID. This season was especially cruel to the fans, though, because of all the 5’s sprinkled in. TEASE.

Without further ado, here is your 2012 Pittsburgh Pirates season summary:

April 7 – Phillies, 2-1 win. (1 – 1). Greg Brown Homer Boner Meter Score of 2.
It would only take the Pirates two games to get their first win. Excitement level is still tepid, though, since this is a team with the 5th lowest payroll in MLB coming off a 90 loss season. Only the die-hards (morons) are really stoked.

April 30 – @Braves, 9-3 loss. (10 – 12). Greg Brown Homer Boner Meter Score of 1.
Looks like a typical season at this point. The team is two games under .500 with the help of unexpected great starting pitching. The offense is woeful.

May 18 – @Tigers, 6-0 loss. (18 – 21). Greg Brown Homer Boner Meter Score of 1.
Justin Verlander had his no-hitter ruined with one out in the 9th by Josh Harrison. It’s obvious by now that the team has some real deficiencies in the lineup. J-Hay is the least-creative and dumbest fucking nickname ever. You can thank Greg Brown.

May 27 – Cubs, 10-4 win. (23 – 24). Greg Brown Homer Boner Meter Score of 2.
The Pirates complete their first sweep of the season in a 3 game series against the Cubs. They improve to 23 – 24, but the Cubs would finish the season with over 100 loses. Sweeping shittier teams is going to be a theme over the next several weeks of the season, inflating their record and creating unrealistic expectations.

Jun 30 – @Cardinals, 7-3 win. (42 – 35). Greg Brown Homer Boner Meter Score of 4.
By now, the bandwagon is overly crowded. The team compiled a record of 17 – 10 in June to soar to 7 games over .500. Excitement is building, but some fans are still cautious—waiting for the inevitable collapse. They were aided with a soft American League schedule, going 7 – 2 against the bottom of the AL Central—the awful Royals, Indians and Twins.

July 5 – Astros, 2-0 win. (46 – 36). Greg Brown Homer Boner Meter Score of 5.
They just completed a four game sweep against the Astros to go 10 games over .500. Ten games over? In July? By now Greg Brown is just openly stroking it during broadcasts. Fans are going nuts. The stupid Zoltan thing is spreading like wildfire. (Be honest…if you were doing the Zoltan thing at games, how much of an ASS do you feel like now?) The Astros are one of the worst teams ever, though. It helped that the Pirates were 6 – 1 against them to this point.

July 8 – Giants, 13-2 win. (48 – 37). Greg Brown Homer Boner Meter Score of 5.
The Pirates go into the All Star Break in 1st place in the NL Central , one game up on the Reds. Fans are OUTRAGED that James McDonald did not make the All Star Game. (The same fans that are doing the Zoltan thing.) Pirates are also rumored to be one of the teams involved in Cole Hamels trade talks. LOL. Hamels would eventually sign a $144 Million contract to stay with the Phillies. In comparison, the Pirates started the season with a payroll under $60 million.

July 22 – Marlins, 3-0 win. (54 – 40). Greg Brown Homer Boner Meter Score of 5.
Another sweep against a really shitty team. The Marlins would finish the year as the worst team in the NL East with over 90 losses. At this point the Pirates are ½ game behind Reds for first place in NL Central.

July 24 – Cubs, 5-1 loss. (55 – 42). Greg Brown Homer Boner Meter Score of 5.
The game is not the story on this night. The Pirates trade to the Houston Astros for pitcher Wandy Rodriguez is. The Pirates would give up minor league outfielder Robbie Grossman and minor league pitchers Rudy Owens and Colton Cain. It is worth noting that the Pirates would only have to pay $1.7M of Rodriquez’s 2012 salary. Fans mistakenly think that the Pirates are buyers at the deadline, but they do not acquire anyone else of significance. James McDonald’s ERA in his first three starts after the all-star break is 8.88, so acquiring a pitcher like Rodriquez was a necessity. McDonald’s decline should not be a surprise to anyone as he did the same in 2011, his first year as a starter.

July 28 – @Astros, 4-3 win. (58 – 42). Greg Brown Homer Boner Meter Score of 5.
This win is significant because after compiling a four-game winning streak against the awful Cubs and Astros, the Pirates are now at a season best 16 games over .500. They are sure to finish over .500 for the first time in 19 years, right? RIGHT? At this point some delusional fans are thinking World Series. In their defense, Greg Brown is hyping up every pitch and standing atop PNC Park after every win with the Jolly Roger waving from his dong.

July 31– @Cubs, 5-0 win. (59 – 44). Greg Brown Homer Boner Meter Score of 5.
This was the game where AJ Burnett threw the one-hitter. I was in Wrigley for this one and I like to think I jinxed him by giving him the Malocchio. The horrendous Cubs were being decimated with trades at this point, having just dealt their ace Ryan Dempster, who was supposed to start that day. The Pirates took full advantage winning 2 of 3 in the series.

Aug 3 – @Reds, 3-0 loss. (60 – 45). Greg Brown Homer Boner Meter Score of 5.
Aroldis Chapman hits Andrew McCutchen in the arm in the 9th inning with a 101 MPH fastball. McCutchen threw a fit in the dugout after the game and the team didn’t retaliate in the rest of the series. The Zoltan fans point to this moment as the turning point in the season. The obvious problem is the payroll and the fact that it had not increased at the trading deadline.

Aug 22 – @Padres, 4-2 loss. (67 – 57). Greg Brown Homer Boner Meter Score of 4.
Reality is starting to sink in as the Pirates are swept by the Padres. Not only is the division out of reach now, as they have fallen 8 games behind the Reds, but they are now a ½ game behind the Cardinals for the 2nd Wildcard spot. The Zoltan fans still think they have a shot at the playoffs, though, which is actually really sad.

Aug 31 – @Brewers, 9-3 loss. (70 – 61). Greg Brown Homer Boner Meter Score of 3.
It’s evident that the Brewers still own the Pirates even without Prince Fielder. The Pirates finish August only nine games over .500 and the playoffs are pretty much out of reach—even though mathematically still very possible given the poor play of the Cardinals and Dodgers.

Sept 14 – @Cubs, 7-4 loss. (72 – 71). Greg Brown Homer Boner Meter Score of 2.
The Pirates lose a season high 7th game in a row. The Pirates always seem to have a least a 7 game losing streak in them. The excitement has trailed off significantly. The Pirates are now dangerously close to 4th place in the division. To think they were in 1st place just two months ago! Now there is serious concern that they will not even finish above .500 which seemed a certainty just one month ago!

Sept 20 – Brewers, 9-7 loss. (74 – 75). Greg Brown Homer Boner Meter Score of 1.
The Pirates are swept by the Brewers and fall below .500 for the first time since May. The fact that they have sunk this low is unthinkable for the Zoltan fans.

Sept 28 – Reds, 1-0 loss. (76 – 81). Greg Brown Homer Boner Meter Score of 1.
The Pirates are no-hit by Homer Bailey and the dream of breaking the 19 year losing streak is over with their 81st loss of the season. This is the first time the Pirates were no-hit since 1971. It’s hard to believe that in the last two decades of losing, they had not been no-hit before! Greg Brown’s penis is dead.

Sept 30 – Reds, 4-3 loss. (77 – 82). Greg Brown Homer Boner Meter Score of 1.
Joel Hanrahan, one of the few bright spots for the Pirates this season, would blow a save opportunity in the 9th as the Pirates clinch their 20th straight losing season. Unreal. Greg Brown kills himself.

There you have it. The whole season sized up against Greg Brown’s erections. A very disappointing season for fans that got their hopes up. Another typical business-as-usual Pirates performance for the rest of us. As you can see during the peak of the bell curve where Brown’s penis was at its hardest, the Pirates beat the shitty teams fairly consistently. They just didn’t have enough talent to beat the better ones, especially down the stretch when they didn’t bother to improve at the trading deadline. The good teams (with higher payrolls) pulled away as expected. The more the Pirates lost, the more they lost confidence and couldn’t even beat the shitty teams anymore.

Even GM Neal Huntington, in trying to diminish the collapse, said that the Pirates were over-achieving through the first half of the season and were not really that good—which is probably something that no one affiliated with a sports team should ever admit! Huntington would go on to compare the Pirates to the Penguins when they hit a rough slide in the early 2000’s with four losing seasons in a row. He said that the Penguins were hated then, but turned things around. Nevermind that he was completely wrong about the Penguins being hated, but no one affiliated with the Pirates should ever criticize any other organization in sports. Ever. Huntington is an asshole and should be fired along with his deranged assistant, Kyle Stark. Bob Nutting is a rich asshole. Everyone affiliated with that team can go fuck themselves. It’s Steeler season. Thank God.