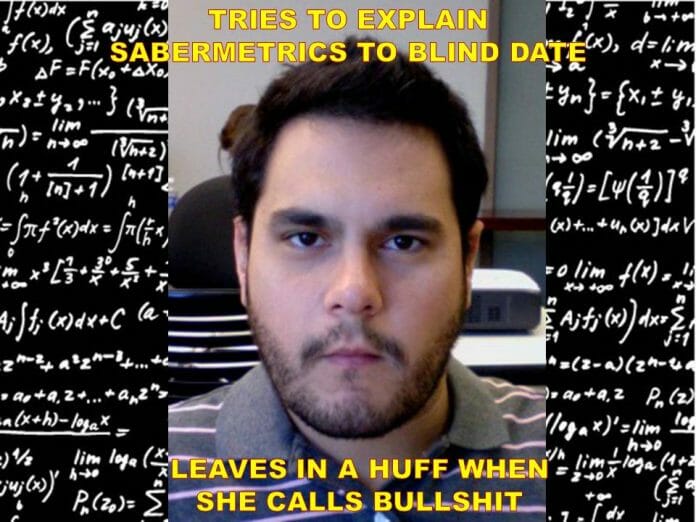 The American League MVP this year is pretty much a done deal, right? Only a fucking moron wouldn’t vote for Triple Crown winner Miguel Cabrera of the Detroit Tigers, right? Well, one of the unfortunate problems with the Internet is that there is always a fucking moron out there ready to say something stupid to get attention. (I do it all the time.) In this case, though, the culprit is a writer for NESN.com named Zach Stoloff. I have no idea who he is. I only came across one of his articles because I get spam from NESN several times a day and although all of it goes directly to a junk folder, I occasionally catch a glimpse of some of the subjects. (SPAM works!) Stoloff’s article caught my eye because of this absurd heading: Triple Crown Is Great Achievement, But Miguel Cabrera’s MVP Candidacy Suggests ‘Imperfect Understanding’ of ‘Value’. In it, he touts Mike Trout as the AL MVP over Cabrera, which is insane. Trout was a fantastic rookie and had an incredible season. But his season was nowhere near as good as TRIPLE CROWN WINNER Cabrera’s whose team made the playoffs (unlike Trout’s). In essence Stoloff gives the edge to Trout because of stolen bases and defense. In his defense, there are many other Sabermetric enthusiasts out there who are thinking in the same vein. I’m picking on him mainly for the condescending tone and because I get so much spam from his stupid website. STOP SENDING ME YOUR SHIT.

He starts out by writing:

“Moneyball was an imperfect movie which presented an oversimplified, insultingly condensed version of the introduction of Sabermetric philosophies to baseball.”

So Stoloff thinks Moneyball NEEDS MORE MATH. Look, Moneyball took a boring aspect of a ridiculously slow and tedious game and turned it into one of the most entertaining sports movies of all time. SORRY THERE WEREN’T ENOUGH FRACTIONS FOR YOU.

He goes on to say this about the movie:

“However, sometimes the simplest explanation is the best approach, and, if nothing else, what the move did was provide a few easily understood analogies to explain the overlying widsom of mathematical analytics to the layman.”

SORRY, WE’RE ALL TOO STUPID TO UNDERSTANDING YOUR BASEBALL NERD NUMBERS. Just take a minute to really think about what fuckface is saying. He thinks he is part of some elite club that understands baseball on a higher level than the rest of us because he uses ridiculous and meaningless new data concepts to evaluate players. We’ll never “get” baseball like Stoloff does but at least Moneyball gave us all a little “Sabermetrics for Dummies” lesson to keep us busy while the grownups talk about the important stuff. FUCK YOU AND YOUR FUCKING UPPITY CLUB, ASSHOLE.

In leading the AL in Batting average, RBIs and Home runs, Cabrera did something that hasn’t been done in baseball since 1967. He undoubtedly deserves the MVP award. The only significant statistical categories that Trout beat out Cabrera in are Runs and Stolen Bases. Trout had 129 Runs scored compared to Cabrera’s 109. But Cabrera beat Trout soundly in RBIs, 139 to 93. Stoloff argues, like most Sabremetricologists, that RBIs are more a factor of where you bat in the order, so Cabrera should have had more RBIs anyway by virtue of batting third while Trout was a leadoff man. However, the discrepancy between their run totals is much smaller (20) than that of their RBI totals (46). Advantage goes to Cabrera.

Trout no doubt has the edge in stolen bases and fielding percentage, but Cabrera was still third in the AL among third basemen in the AL in fielding percentage. He wasn’t terrible. He certainly wasn’t so bad at it that it should COST HIM THE MVP. THAT WOULD BE ASININE. Trout was FIFTH among AL centerfielders in fielding percentage. Not like he was the best at his position, either. And by the way I’ll say it again because it is very important to note that Trout’s team will be at home watching Cabrera’s team in the playoffs.

Stoloff gets really annoying when he pulls out some bullshit Sabremetric stat called WAR (Wins Above Replacement). For those unfamiliar, I will let him explain it so you can understand how truly absurdly annoying and stupid this stat is:

“The purpose of the stat is to determine, in plain terms, just how many wins one individual basbeball player is responsible for (on the aggregate) as compared to an imaginary “replacement player,” which is a statistically average theoretical standard.”

Imaginary “replacement player”? THIS IS WHY EVERYONE THINKS BASEBALL FANS ARE FUCKING HUGE NERDS. Stoloff goes on to explain that three different baseball websites that calculate WAR all come up with DIFFERENT VALUES BECAUSE IT’S FUCKING BULLSHIT. WAR attempts to quantify every aspect of baseball from offense, defense and base-running stats to intangibles like ballparks played in and difficulty of position played and other factors. The number that is calculated is used to say that the player is worth x number of wins to their team. Trout’s WAR value is about 10 (depending on which calculation you use) while Cabrera’s is 7. Andrew McCutchen’s is also 7, to give you Pirate fans a basis for comparison. Neil Walker’s is 3. Would you trade both McCutchen and Walker for Trout? Would you even trade McCutchen straight up for Trout? Fuck no. McCutchen had a higher average, more home runs more RBIs and is much better defensively. Trout had more stolen bases. WAR must place a HUGE EMPHASIS on stolen bases. No mention whether it takes BPG into account though.

Why can’t we all just acknowledge that Cabrera deserves to be the AL MVP because he did something amazing and historical? Is WAR really such a foolproof stat that it should be used to override common sense? I leave you with one final quote from asshole’s piece:

“It’s important to note right off the bat that “wins above replacement” is an imperfect stat.”

No kidding. Really? BUT YOU STILL WROTE AN ENTIRE ARTICLE USING WAR TO ARGUE THAT THE TRIPLE CROWN WINNER DOES NOT DESERVE THE MVP? Please choke on Trout’s dick. Stoloff could have written an article trying to analyze the flaws with WAR that caused a Triple Crown winner to be ranked so low— but instead wrote some cliquish, irritating nonsense about how much smarter he is than the rest of us because he uses Sabermetrics.

If you’re still not convinced that it is stupid to use WAR to argue that Trout deserves the MVP, please note that Keith Olbermann also argues for Trout. Gee, Olbermann and this asshole Zach Stoloff? Where do I sign up? Please teach me your wise ways of baseball elitism so I can taunt and annoy fans that are beneath us! It’s assholes like them that make it so hard to like baseball. I usually don’t mind all the Sabermetric geeks having their fun, but if it costs Cabrera a well-deserved MVP, that would be a fucking travesty.