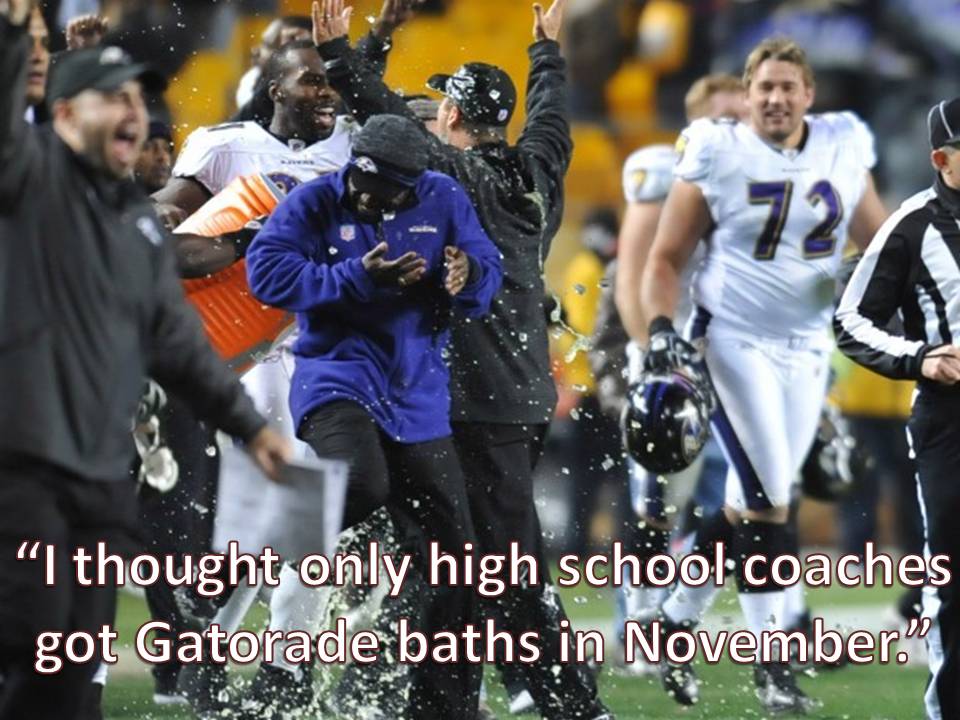 Tomlin:  “Well, it was a tough loss, men.  It hurts to lose to the Ravens, especially in that fashion.  We couldn’t finish…and we ended up paying the price because of it.”

Lebeau:  “Flacco put together a 92-yard game winning drive.  I couldn’t stop throwing up that night.”

Tomlin:  “I know what you mean.  Getting swept by the Ravens is a hard pill to swallow.  It’s funny, though, I thought only high school coaches got Gatorade baths in November.”

Arians:  “Well, when you’re a coach that has never won anything of significance, a November regular season game can be as big as it gets.”

Lebeau:  “Are you still getting hammered about not getting that field goal off in time?”

Tomlin:  “Yes, the media is not letting that one go.  Al, would your guy have made that 47 yarder?”

Special Teams Coordinator Al Everest:  “If he had fifteen cracks at it.”

Tomlin:  “Exactly.  I hate to say it, because it’s a horrible situation, but at least with everything going on down at that University to the east, it’s going to draw a lot of attention away from us for awhile.”

Arians:  “I know.  I just told Ben that if he was ever going to get another rape accusation against him, now would be the perfect time.”

Tomlin:  “Wait, what?  No.  Ben can never, ever get another rape accusation levied against him.  Ever.”

Lebeau:  “How is that going to draw attention from us?  I don’t see what the big deal is?”

Tomlin:  “Are you serious???  A former coach was indicted for horrendous crimes!”

Arians:  “Jeez, Dick…how can you be so out of touch?  That story is everywhere!”  (Holds up his copy of Golf Digest to show the PSU scandal on the front cover.)

Lebeau:  “Holy crap!  I thought you were talking about the Pitt loss.”

Tomlin:   “No….Pitt loses all the time!  They never take the focus off of us.  If anything, between them and the Pirates sucking all the time, it puts added pressure and scrutiny on us to be successful and erase the stench of their dismal failures.  That’s a lot of burden for us to carry in this city.”

(Arians’ blackberry vibrates with a text from Roethlisberger:  ‘Are you guys talking about pussy in there?  I just had this weird feeling.’)

Rooney:  “You guys hear about Penn State diddling all those little kids?”

Tomlin:  “Unbelievable.  We were just talking about it.”

Rooney:  “I was just thinking…we might be flying under the radar for awhile.  That Ravens loss is going to blow over quick.  Heck, if Ben was ever going to do something stupid again—now would be the time.”

Tomlin:  “Well, regardless of whether the spotlight is on us or not, we got another huge divisional game this weekend.  With the Bengals.  And we’re looking up at them in the standings this time around. (grimaces)  Sorry, I just threw up a little in my mouth after I said that.”

Lebeau:  “What the hell?  They’re better than us too?  How did that happen?  Did Brown sell the team?”

Arians:  “I can’t take this anymore.  We need to get this man an iPad.  You need to stop reading BOOKS, old man, and start reading the INTERNET.  How do you think I got so smart?”  (Googles ‘gladiator sandals’ on his blackberry.)

Tomlin:  “Well, I’m not giving up on the division just yet.  We need to do our part and take care of the Bengals, and things may just fall into place in the end.  I wouldn’t be surprised if the Ravens end up choking against the Seahawks this weekend anyway.”

Rooney:  “Dick, great work getting Harrison ready last week.  He played like a beast even though he missed a few weeks with that eye injury.”

Arians:  “Yeah, that was impressive.  I liked the Robocop visor too.”

Lebeau:  “I used an old motivational tactic.  Remember when the Fonz was temporarily blinded and Richie made him re-assemble his motorcycle piece by piece?  We did the same thing with James the morning of the game.  We used Roethlisberger’s bike.”

Lebeau:  “No, he couldn’t put it together for shit.  But it got him incredibly frustrated.  Pissed him off something awful.  He plays great when he’s pissed.”

Tomlin:  “Pissed Roethlisberger off too.  It’s still in pieces.  He’s been carrying it around on his back like Chewbacca with C-3PO.”

Lebeau:  “I’ve been trying to figure out a way to get Harrison good and pissed again this week.  Something that’s really going to get his blood boiling for that red-headed Bengals QB.”

Rooney:  “I got it.  Have someone take his vehicle apart…then tell him Goodell did it.  And spray paint ‘Gingers Rule!’ on his parking space!  (pauses)  I just hope he doesn’t kill anybody on Sunday.”