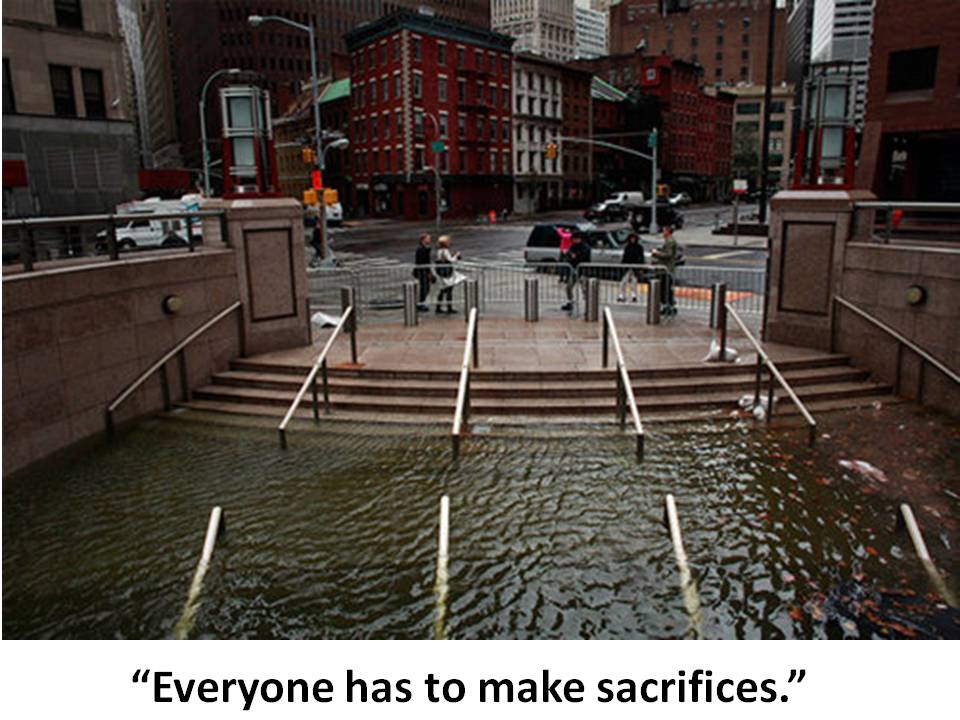 Tomlin: “Very quickly on last Sunday, men. That was another solid victory. We kept RG3 in check. The offense was solid but not spectacular. The most important thing, though, is we got another ‘W’ out of it. Now we move on.”

Art Rooney II: “This is going to be a tough one, Mike. Going into New Jersey and facing the Giants after the devastation that hit that region? Hurricane Sandy took a lot from those people. It’s not going to help if we go in there and hand them another loss.”

Tomlin: “I don’t comprehend. Are you saying we throw the game?”

Rooney: “I’m just saying that those people in the NY/NJ need this game much more than we do.”

Lebeau: “That’s insane. I’m not laying down for anybody. My guys are going in there and we’re going to give Eli all he can handle. I feel terrible for those people left without food and shelter, but I gotta job to do and I’m going to have my guys ready to do it.”

Tomlin: “Eli is a hero for those people.”

Lebeau: “He plays a game. Those people have firemen and policemen and EMT and politicians now who have to be the real heroes.”

Tomlin: “You can never have too many heroes. Eli is a hero on Sundays and those poeple need a hero right now.”

Lebeau: “It’s happening now. Bloomberg is that hero. He locked up half of the city’s criminals, and he did it without wearing a facemask. That city needs a hero with a face.”

Lebeau: “Because we have to chase him.”

Tomlin: “He didn’t do anything wrong.”

Lebeau: “Because he’s the hero New York deserves, but not the one it needs right now. So we’ll hunt him. Because he can take it. Because he’s not our hero. He’s a silent guardian, a watchful protector. A Dork Knight.”

Rooney: “Now I have no idea who to bet on. Do I take the points?”

Haley: “Sorry I’m late guys. What’s this bullshit I hear about us not flying in the day before the game? I need some recovery time. Do you know how much free vodka I drink on the plane?”

Tomlin: “Well everyone has to make sacrifices. Just cut back on the vodka.”

Haley: “Are you serious? Do you know how erratic I can get when I’m not sucking down vodkas? I almost punched Kurt Warner in the face because he asked me to join his prayer group.”

Tomlin: “How about you still get smashed on Saturday and we’ll have a car pick you up and you sleep it off on the plane. You’ll be fine by game time.”

Tomlin: “Your dad hired me.”

Tomlin: “We didn’t meet till a month later. You were off on Barbados.”

Rooney: “Whatever. You’re here now. I’m here now. All is well. We have a big game on Sunday. I’m taking us and the points. Don’t let me down.”

Haley: “By the way, Gilbert’s still out and Mendenhall too and now Dwyer’s a little banged up. BANG! POW!”

Lebeau: “Holy mash unit, Tomlin! And the Giants are pretty healthy. Eli’s got all those guys to throw to: Cruz, Hixon, Nicks.”

Rooney: “Where does he get those wonderful toys?”

Tomlin: “I don’t know. They drafted well. Look, we’re kind of all over the place now. Let’s just focus on the game. If we keep our focus and stick to the gameplan, we’ll go in there and we may just overcome all these injuries. We’re not dead yet!”

Join us next time, on twitter, to see if our heroes can save the day!