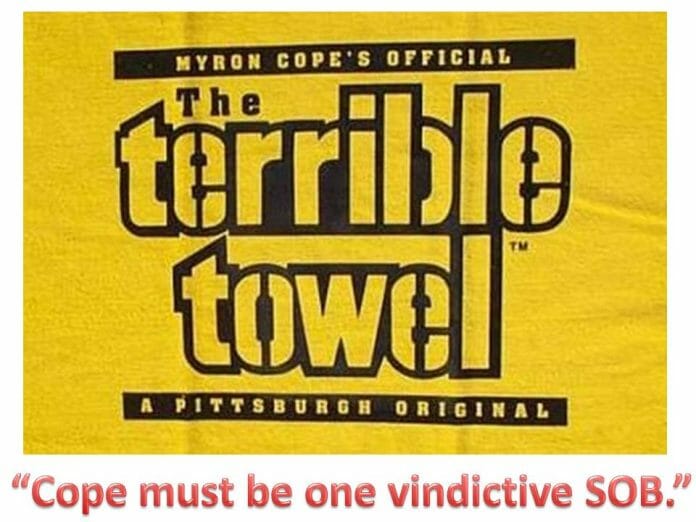 Tomlin:  “Well, BA, fantastic job on Sunday.  Way to shut the critics up.”

Arians:  “They can all blow me, anyway.”  (Flips through Golf Digest magazine.)

(A shirtless Dick Lebeau gets up of the floor where he was doing crunches.)

Lebeau:  “I gotta hand it to you, BA.  That offense was one well-oiled machine this week.  Now punch me in the stomach!”

Lebeau:  “Jesus Christ.  You offensive guys are soft.”  (He gets back down onto the floor to do pushups.)

Rooney:  “That was one hell of a beating you guys gave the Titans on Sunday.  That Myron Cope must be one vindictive SOB.  He’s STILL punishing those guys for stomping on his towel.”

Rooney:   “You know this one time, an intern took the last cup of coffee and forgot to make another pot.  I watched that little fucker Cope just pummeling him with his coffee mug.  It reminded me of Ray Liotta pistol-whipping the little tennis snob in that Scorsese movie.”

Tomlin:  “Here, here.  By the way, Mr. Rooney, I never got the chance to congratulate you on the success of Operation Silver Devil.”

Rooney:  “Thank you.  I hate that we had to resort to foul play, but with Al Davis gone now we don’t have to worry about them making any more lopsided trades with the Patriots.”

Rooney:  “Only problem is, now with him out of the picture, we may actually see the Raiders have a resurgence.   But we were willing to take that risk.  At least they’re not in our division.”

Tomlin:  “On that note, are you still doing everything you can to keep Mike Brown alive?”

Rooney:  “Oh, hell, yes!  In fact this morning I just sent over another crate of vita-muffins.  He loves those things.  He doesn’t even realize that’s what’s keeping him regular.”

Arians:  “Hey, maybe you ought to get this guy a crate?”  (He sucker punches Lebeau in the stomach.)

Lebeau:  (Barely even notices the punch.) “Hey, at 74 years old, twice a month IS regular!”

Rooney:  “By the way, how is Operation Domestication going?”

Arians:  “Very well, actually.  We don’t even need to use the chloroform to get Ben home after practice anymore.  Of course, that means Ashley has to have “friends” over more often.  But it’s better than the clubs.”

Rooney:  “And the salary dispute?”

Arians:  “That’s been taken care of.  She now also gets a week in Maui every year for a ‘business trip’.  Oh, and we had to order him the Spice channel.  He was getting bored with just Playboy.”

Tomlin:  “You know what you need to do is just get him the Adult bundle.  Probably save some money.”

Arians:  “Comcast doesn’t offer it.  Ain’t that a bitch?”

Rooney:  “That’s bullshit.  I fucking hate Comcast.  Well, are you guys going to do any actual work this week?”

Tomlin:  “Yes, we got a lot of work to do.  Another big home game this week.  Another challenging opponent coming into town.”

(Everyone looks at him blankly.)

Tomlin:  “Fuck it.  It’s Jacksonville.  Everyone take the rest of the day off.”