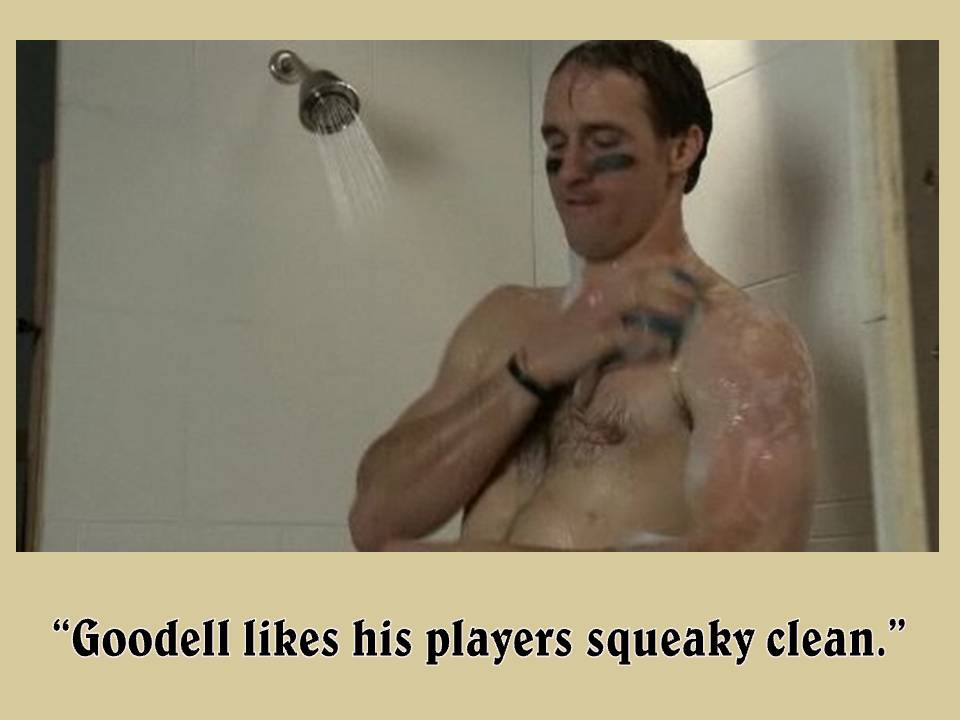 Tomlin:  “At this juncture men, we have to assume that we’re going into battle Monday night without James Harrison.  We won’t know the status of his appeal for some time, but it appears the helmet-to-helmet hit that rendered McCoy senseless is going to cost us all this time.”

Arians:  “Oh God no!  We can’t go without Ben AND Harrison!  We need the defense to pick up the slack.  Nobody can run my offense like Ben does.  DID YOU SEE HOW LOST BATCH WAS OUT THERE LAST WEEK?  And he knows this shit better than I do!”

Rooney:  “I’m not ready to rule Roethlisberger out.  That is one tough bastard.  His rookie year some guy hit him over the head with a tire iron— Ben was hitting on the guy’s girlfriend again within the hour.  He’s a machine.”

Lebeau:  “I’m not ready to rule James out either.  There’s a chance he could win his appeal, isn’t there?  I mean, he was just trying to make a play for christ’s sake.”

Tomlin:  “I do have James on the phone, so we can all hash this out.  Good morning, James.”

Tomlin:  “How did the appeal go, James.  As expected?”

Harrison:  “Yes, just like you said.  Goodell was on the videoconference wearing a Ted Cottrell mask and Art Shell just sat there with a dazed look.”

Rooney:  “Yes, Art’s a bit slow now.  Ironically, he took one too many hits to his own head from his playing days.  I don’t think he’s said a word since his second head coaching stint.  Tragic.”

Tomlin:  “James, did Goodell give you any indication?  Any chance you can suit up Monday night?”

Harrison:  “Naw.  It’s not looking good.  I called him a spoiled little vaj.”

Tomlin:  “I half expected that.”

Tomlin:  “Well, we might as well go over this.  Make sure it doesn’t happen again.  We absolutely know that helmet-to-helmet is out.  You need to avoid that contact at all costs.”

Lebeau:  “You don’t want to hit with your helmet at all.  Helmet to back.  Helmet to chest.  Any of that is going to draw a flag.”

Rooney:  “Face mask either.  Don’t forget about the Drew Brees fine last year.  You don’t want your face mask to come into any contact with the guy either.”

Tomlin:  “Maybe just kind of put your shoulder into the guy….keep your head to the side.  Just hope he doesn’t side step you the other way.”

Lebeau:  “What about the Fitzpatrick fine last season?  If you hit the guy with your shoulder, your helmet is inevitably going to come into contact with some part of his body.  That’s a penalty.  Probably another suspension.”

Harrison:  “What if I just retract my head down inside my body.  Like a turtle?”

Arians:  “You can do that?” (strange looks from everyone.)

Harrison:  “This is bullshit.  They’re going to suspend me no matter what I do.  And those Valley girls on the Packers can do whatever they want and they won’t so much as even draw a flag.”

Rooney:  “Well Goodell likes his players squeaky clean.  And white.  Unfortunately you don’t fit either of those categories.  So you’re going to keep getting hit in the wallet.”

Arians:  “Only in the NFL…is the black guy the one getting robbed.”

(Everyone turns to stare at him.)

Arians:  “What?  Racist?  It didn’t sound racist until right as it came out of my mouth.”  (leaves room)

Lebeau:  “And the knees.  Don’t target the other guy’s knees.  Nothing below the waist actually.”

Lebeau:  “I’m not sure if that’s sarcasm, but you’re probably safe hitting with your ass.”

Tomlin:  “Maybe just kinda turn to the side a little.  Hit them with your ribs.  Can you do that?”

Rooney:  “Or just pull up and then kind of reach out with your arms.  Grab the guy!”

Tomlin:  “Ease him down.  Gently.  Just kind of help him to the ground.”

Tomlin:  “Yeah, I guess he didn’t sign on to play ‘tag’ like Goodell would have us.  (pauses)  Goodell is such a vaj.”