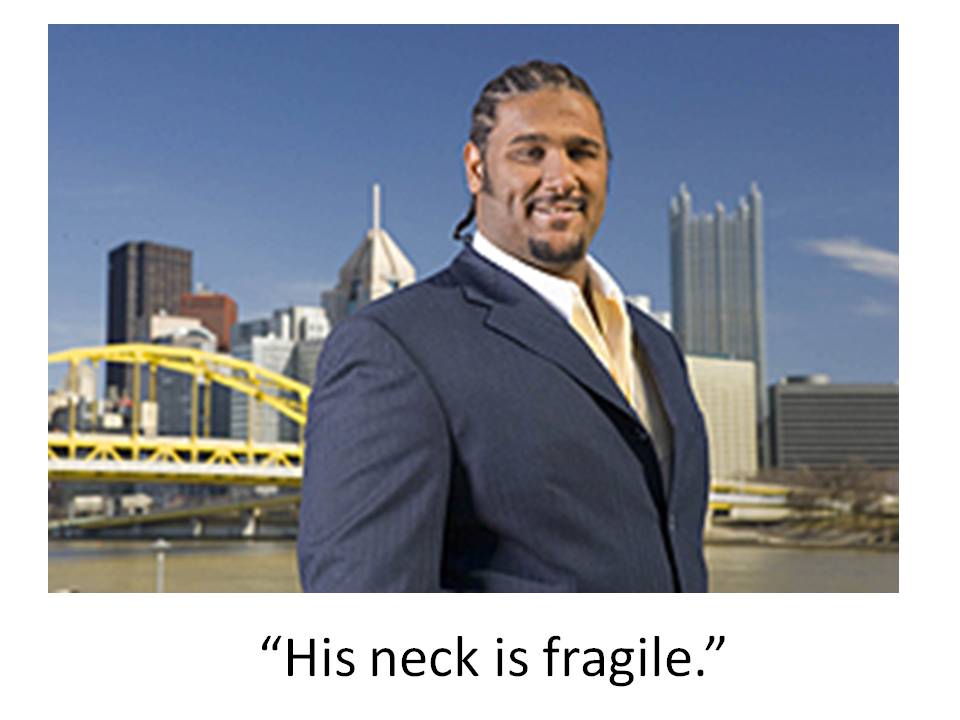 Tomlin:  “Look, we all know the offense has been struggling….”

Arians:  “The fuck you talkin’ about Mikey?”  (Chris Kemoatu and Doug Legursky flank him on each side.)

Lebeau:  “10 points against the Texans just doesn’t cut it, dumbass.”

Arians:  “Well, maybe you shouldn’t have let up a thousand yards rushing to Arian Foster.”

Lebeau:  (Lunges for Arian’s throat, but is quickly thwarted by Kemo and Legursky).  “You fucking white trash…I’m tired of carrying your ass!”

Tomlin:  “Enough, men.  We can’t fight amongst ourselves.  The standard is the standard and the offense is shit—so we need to get this fixed.  Kevin is here because he has brought Max Starks back to help on the O-Line.”

Colbert:  “Well, Max hasn’t played or practiced in over a year.  He’s fatter than ever and his neck is fragile.  But he’s probably going to be the best lineman we got.”

(Starks walks into the room).

Tomlin:  (Hands Starks the offensive playbook.)  “Max, welcome back.  We’re glad to have you.  I know it’s short notice, but we’d like to get you on the field as soon as possible.  Take the playbook.  See if you can be ready to go this weekend.”

(Starks leaves with the playbook).

Arians:  “It would be nice to have him out there this week.  Only problem is…my system it too complex.  I know Max has been around—but I’ve tweaked it a lot this season.  No way anyone could grasp it so quickly.”

(Starks walks back into the room a minute later and tosses the playbook onto the table.)

Lebeau:   “Jesus Christ, BA!  Let me see this thing.”  (Starts flipping through Arians’ Playbook.)  “A bunch of these pages are blank?  And look at this play—it just has Ben running around in a bunch of crazy circles.  And the receivers are doing the same thing!   Wait a fucking minute!  Did you use my Spirograph?  Is THAT what you needed it for?  I thought it was for Toys for Tots!”

Rooney:  “Gentlemen, I don’t usually interfere, but I’m a little concerned that my $100M QB is going to get killed out there.  I asked Mike if I could sit in on offensive game planning this week.”

Tomlin:  “You know you’re welcome anytime, Mr. Rooney.  BA, why don’t you start by going over your notes?”

Tomlin:  “What the fuck, Art?  First you force this guy on me when I get hired.  And now I still can’t fire his ass?  He’s killing us!”

Rooney:  “We’ve been over this a hundred times, Mike!  He’s got incriminating photos.  He’s untouchable!”

(Arians walks back into the room shuffling through his notes.)

Arians:  “Alright, here we go.  First downs— delayed handoff to the right.  We’ll pretty much do that on every first down for the entire game.  Except when they least expect it—BUBBLE SCREEN.  Twelve of them!  Then run again on second downs.  Third downs we’ll just let Ben do his thing.”

Tomlin:  “What’s with all the running?  The O-Line can’t run block for shit.  We keep putting Ben in third and longs!”

Rooney:  “EFFECTIVELY!  I said run the ball more EFFECTIVELY!  Huge fucking difference!  Running the same play over and over in the most predictable fashion isn’t the least bit effective!”  (He lunges across the table at Arians but is thwarted by Kemo and Legursky).

Arians:  “Hold on…you haven’t heard the best part!  I was thinking maybe in the third quarter I’ll pump a little Steely Dan into Ben’s helmet.  To get him fired up!”

Tomlin:  “Please!  Never do that again.  You cost us two timeouts last game.  And who gets fired up over Steely Dan anyway!”

Rooney:  “I can’t sit thru this anymore.  Just make sure this shit gets fixed!”

(Everyone starts to leave the room, except Arians who remains seated.)

(Arians pulls a photo out of his binder.  It’s Roethlisberger and the Pope doused in altar wine and DP’ing a nun during a SB XL victory celebration at the vatican.)

Arians:  “Ahh…Sister Mary Christine!  What a blessing you truly are!”