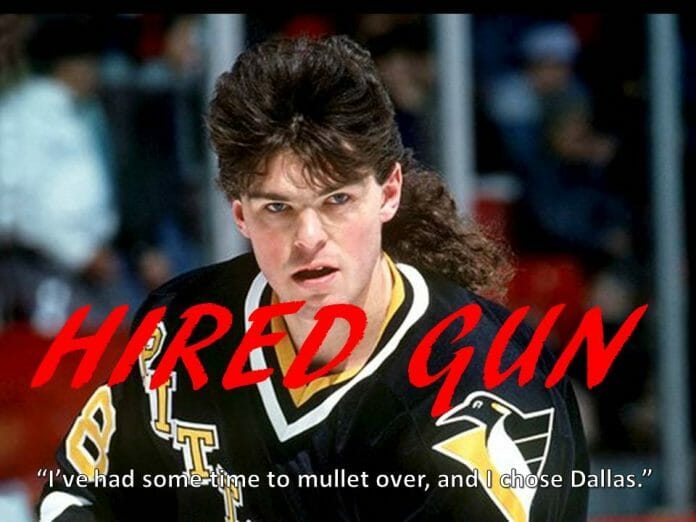 HOWDY PARDNERS! It is me— your old friend Jaromir Jagr! Well I am in new home again. Texas! Steers and queers! Everything is fucking huge in Texas, right? That is what they say. Titties especially. If I had made free agent decision based only on city in union with the biggest titties then I would say I have chosen wisely. Ha, Ha. But no, that is no why I make free agent decision. I sign with Dallas because of money. Cold, hard cash. But can you blame me? I really need money. Make no beans about it, I have gambling problem. But lucky there is fix for gambling problem— more money! Texas have lots of casinos too. Indian casinos! Cowboys and Indians! Talk about real America! When I was little kid growing up in Czechoslovakia I had two heroes— man who raise goats behind nudie bar across the river and Tonto. That Tonto! Fucking hilarious! It’s lonely in Dallas, though. Always very lonely. In Pittsburgh I was lonely. Three seasons in DC— lonely. Four seasons in New York— lonely. Three seasons in Russia— lonely. Philadelphia? Not so lonely. (Philadelphia fans always shouting outside my home telling me to fuck myself. Philadelphia is very crazy place.) But there is definitely loneliness deep down in my soul. An emptiness no hooker can fill. Maybe time to settle down and make little Jaromirs with special lady? Maybe Dallas is just the place? Just hope I not sterile from three years of mystery Russian energy drink. Fucking Russia! Well, nice to catch up with you, Pittsburgh, but I need to go now—big day of titties and Pai Gow. Fucking America!